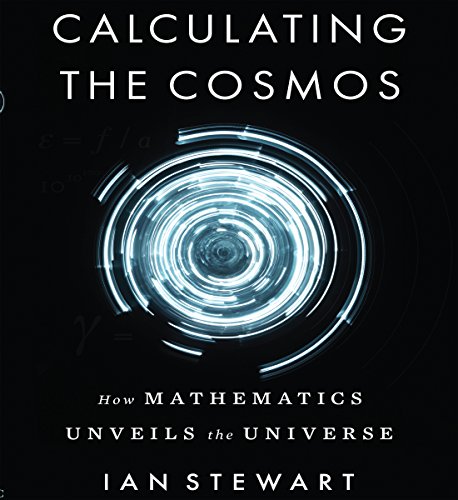 By: Ian Stewart
Narrated by: Dana Hickox
Try for £0.00

In Calculating the Cosmos, Ian Stewart presents an exhilarating guide to the cosmos, from our solar system to the entire universe. He describes the architecture of space and time, dark matter and dark energy, how galaxies form, why stars implode, how everything began, and how it's all going to end. He considers parallel universes, the fine-tuning of the cosmos for life, what forms extraterrestrial life might take, and the likelihood of life on Earth being snuffed out by an asteroid.

Beginning with the Babylonian integration of mathematics into the study of astronomy and cosmology, Stewart traces the evolution of our understanding of the cosmos: How Kepler's laws of planetary motion led Newton to formulate his theory of gravity. How, two centuries later, tiny irregularities in the motion of Mars inspired Einstein to devise his general theory of relativity. How, 80 years ago, the discovery that the universe is expanding led to the development of the Big Bang theory of its origins. How single-point origin and expansion led cosmologists to theorize new components of the universe, such as inflation, dark matter, and dark energy. But does inflation explain the structure of today's universe? Does dark matter actually exist? Could a scientific revolution that will challenge the long-held scientific orthodoxy and once again transform our understanding of the universe be on the way? In an exciting and engaging style, Calculating the Cosmos is a mathematical quest through the intricate realms of astronomy and cosmology.

What listeners say about Calculating the Cosmos

a very good book, the narration was terrible unfortunately, reader had no clue on pronouncing common names in the field

The content was good albeit you had to concentrate to get anything out of it but this was to some extent undermined by the often ridiculous narration. Not only were names and words often mispronouned (and not because he was american) but sometimes different words were used than those intended - just a few examples: Laplaice, uler and casually connected. This narrator should never ever be allowed anywhere near a scientific text ever again.

Very well written book. Where others merely skim the surface, this one provides the details, necessary equations and delves into the discussions. That said, listening is ruined by the narrator's random guesswork (redundant, eh?) at pronouncing certain names, terms, and even common everyday language. Very annoying, distracting and, at times, misleading. Otherwise, his voice and pacing would have made him an effective choice.

Mispronounced even the most simple words. Hard to concentrate on the book with the absolutely butchered narration.

The first half of the book is a nice survey of our solar system, it's formation, and discovery.

The second half goes off the deep end with bizarre dark matter denial, and crank alternatives to the Big Bang. He also gives a totally incorrect description of Schrodinger's cat.

The author seems to see himself as an outsider as a Mathematician. He constantly attacks a straw man of the physics community. He says things like, "nobody thinks about the boundary conditions" (which is simply false) and "there's also a tenancy to overstate the implications of the latest idea or discovery" (which is true about the media, but not about the scientific community).

This book is a good example of Max Planck's maxim "Science progresses one funeral at a time." This author just can't seem to accept scientific discoveries made after ~1950.

needs a physicist to read

Someone who can pronounce the words used in this book should re-record it... Awful, awful mispronunciations abound!! Don’t buy this audio book.... Read the book—that would be my best recommendation !!

As mentioned in previous comments, the narrator's mispronunciations were pervasive and irritating. Although that regularly aggravated my OCD, I found the content of the book was entirely worth it, and often helped me ignore it.

As to the content itself, I was utterly astonished at the amount of astronomical evidence the author gave against currently accepted theories ranging from dark energy and dark matter to the expansion of the universe! I must note, however, that although I am personally still on the fence regarding multiverse theories, I found his refutations of these ideas lacking. For the interested listener, I highly suggest "The Mathematical Universe" by Max Tegmark which gives a clearer explanation of quantum decoherence and how it actually supports the Everretian multiverse as opposed to Mr. Stewart's misinterpretation. Overall, though, I do highly recommend this book, as I haven't seen most of his assertions in anything else I've read.

loved it broke down the cosmos into very easy to understand and manageable numbers to give a good perspective of topics covered in book.

Lots of new information about the cosmos, including a terrific discussion of the growing doubts about the Big Bang and mutliverses. Many twists on gravity and the arrangement of the various different kinds of bodies in the Universe that were new to me and very intriguing, e.g., LaGrange points and the asteroid belt.

Who would you have cast as narrator instead of Dana Hickox?

Dana Hickox is fine but for a raft of mangled pronunciations. Principia, Charon, Copernicus, Bethe, LaPlace, Magellanic and many others - OK names can be tricky - but boson, parabola, hyperbola, spontaneity, radii, chirality and, for God's sake, analogous. Hickox needs to slow down and look up pronunciations and stop taking flying leaps. He is actually a very good reader but blows it by being lazy on the look ups.

I think I expected something more akin to The Science of Interstellar, but it was less that and more a history of discoveries in our solar system, with the last third on the wider universe. Found it generally underwhelming, with little more to say than "math is very exact and where there are questions in the data scientists have made discoveries." Meh.

Holy cow, this guy hasn't researched any of the physics jargon. Sounds like nails on a chalkboard if you know what these words are supposed to be.