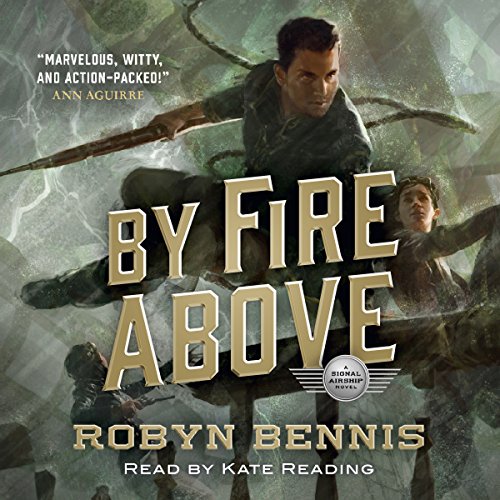 By: Robyn Bennis
Narrated by: Kate Reading
Try for £0.00

By Fire Above is a rip-roaring new audiobook adventure from Robyn Bennis' military airship fantasy series that Patricia Briggs hails as “full of sass and terrific characters”.

"All's fair in love and war", according to airship captain Josette Dupre, until her hometown of Durum becomes occupied by the enemy and her mother a prisoner of war. Then it becomes "nothing's fair except bombing those Vins to high hell".

Before she can rescue her town, however, Josette must maneuver her way through the nest of overstuffed vipers that make up Garnia's military and royal leaders in order to drum up support. The foppish and mostly tolerated Mistral crew member Lord Bernat steps in to advise her, along with his very attractive older brother.

Between noble scheming, undertrained recruits, and supply shortages, Josette and the crew of the Mistral figure out a way to return to Durum - only to discover that when the home front turns into the front lines, things are more dangerous than they seem.

What listeners say about By Fire Above

This was an absolute delight to discover! Enjoyable, likeable characters, entertaining storyline, great adventure and interesting worldbuilding. I didn't expect much and actually felt guilty for having been so skeptical! I wish I could find more in this genre of this quality!

When’s the next one?

I love these books. The realism, the characters. They strike the perfect balance between humour and the horrors of war. More, please?

I loved this sequel, it's every bit as great as the first. and this expands in different areas such as love and family relationships just further adding to our already loveable characters.

Even Better Than The First Book

This is shaping up to be one heck of a great series. Author Bennis has merged the horrors of the Napoleonic war with steampunk to create a grounded, brutal, but wonderfully readable story. At its heart, it's the witty bon mots constantly thrown about by leads Josette and Bernat that make this so appealing. But there are great side characters as well - from Lieutenant Kember to Bernat's brother Roland - who add so much appeal to this story. Add in the action and huminity and you have some very good writing here.

Story: The Vins have seiged Josette's home town and Josette fears for her mother's safety. But getting the aristocrats to recognize and help is another matter. Yet Josette is one determined captain.

To give any more of the story would be to give too many spoilers. But for the most part, the first part of the books is Josette back in port after damage to her ship and trying to drum up help from the military to retake her home town. The second part of the book is the actual retaking - and it is very surprising where that takes the story.

As always, I love the maturity of the characters as well as the grounded realism. Anyone who has read about England and French military in the 18th and 19th century will recognize a lot of what Josette has to deal with from the aristocracy and military incompetence. People die brutally, however, and Bennis does not spare the horrors of war. But I have to appreciate how practical people can be when faced with daunting situations. Or how many are able to rationalize/justify/accept poor decisions.

I listened to the Audible version and the narrator did a good job of giving the characters personalities (almost too good a job - I almost hate Bernat most of the time!).

By Fire Above, Book 2 in the Signal Airship series, is a wild ride! Josette Dupre, the first woman to command an airship in the Garnian Army Air Signal Corps, Lord Bernat Hinkle, her "ship's spy," her imperious but loyal Sergeant Jutes, and Junior Ensign Sabrina Kimber, battle their commanding officers, a self-agrandizing but disgraced new Executive Officer, and their wounded airship, Mistrial, not to mention the Vingalian army on the other side, to save Josette's mother and the town she grew up in. A town, and a mother, who ostensibly hate her. A town that nobody finds of any value, except the King of Garnia, maybe. The world and character-building is elaborately detailed and compelling, the tension palpable, and the descriptions of combat brutally accurate. By all means, read Book 1, "The Guns Above," to find out how Josette and Bernat ended up in this mess in the first place. It will make Book 2 much more enjoyable.

I enjoyed the first book but this one was not as entertaining. It is well written, but this book comes across as more into personalities and emotions than into deeds, and most of the personalities are seriously disturbed people whom I cannot admire. There are some cute gimmicks or clever plans to entertain to the end, but overall the cost to the characters doesn’t lead to the “happy ending “ I prefer for my escapist literature.

an excellent book and sequel.

I love the interpersonal dinamanic between the two main characters. this is definitely a great sequel.

story was pretty good. I like the first one a little better, but a trilogy would round this out really well. but if she keeps up good ideas, a small series

The series gets better and better. You learn more about the characters and care for them. I wish the two main characters would get together, though that would be weird now since they've been involved with each other's relatives.