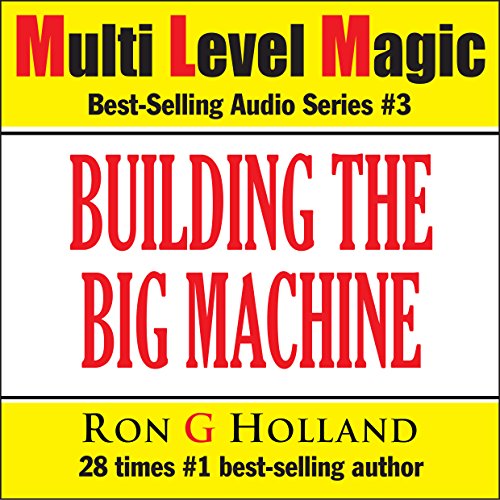 Why you need to assimilate the big picture stuff right now.

"Start with the end in mind" is probably the most powerful thing you'll ever hear when it comes to creating mega-success in the network marketing arena. If you can grasp what the big boys do very early on then that will be half the battle won because you'll know where you're heading as you build the big machine. It's a little like trying to build a racing car: if you don't have a blue-print in front of you, the big box of bits and pieces will never assemble themselves into a winning kit. This book is Ron performing his magic at his very best.

Losers unwittingly visualize the penalties of failure. They do this all the time, and as a consequence they never even get on the first rung of the ladder. On the other hand, winners intentionally visualize the rewards of success. As a result they leap up the ladder of success at least two rungs at a time. Building the Big Machine has many surprises in store for both the novice and seasoned networker alike.

What listeners say about Building the Big Machine

This book has helped me and continues to help me daily. The Author is a great motivator, and is so enthusiastic you can tell he genuinely wants you to succeed . A must read.

Loved it! Just the piece of the jigsaw I was missing! very well put together and I will definitely by purchasing more from this series...outstanding! thanks, Michael 😊

Make this a priority!!

Great book. All the tools are in this working manual.
This really is a must have.
The author pulls no punches.

The key is to do it!

This book was so valuable to me. I've already begun implementing the strategies Ron outlines in his clear and engaging style. I highly recommend it to anyone looking to become a mind power person! .

The path is worth the read

I found this book to help more in the visualization process than any other personal development book I've read before. Like Ron says you have to do the stuff. You can't just listen to or read 100 books while not performing anything they tell you. In this book he doesn't let you get away with reading it then plowing on to another book without applying the info in this one.

I was disappointed in this book. had a hard time listening to this entire book.

This is the first book/audio I ever listen to that has a serious warning at the beginning. ..
It is absolutely awesome. This stuff really works. Prepare to be amazed by your own brain power. Ron has the key to unlock that thing on top of your neck..
Two big thumbs up!

In sales? YOU NEED this series

Ron g Holland is a master. you learn so much from his series. If you are in sales or just want to better your path in life .. this is a very affordable series