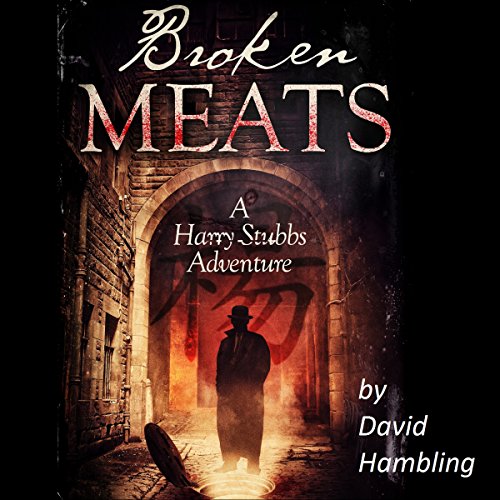 By: David Hambling
Narrated by: Gethyn Edwards
Try for £0.00

Weird things lurk in the dark streets of London in 1925.

After a bizarre shooting incident, Harry Stubbs, former heavyweight boxer and sometime debt collector, is coerced into helping a visitor from Shanghai. Mr Yang, an agent of the feared Si Fan Society with unusual powers, is seeking information about a dead man.

Roslyn D'Onston was a journalist and black magician - and a leading suspect in the Jack the Ripper killings. D'Onston has been dead for 13 years. But exactly how dead is he now?

When Yang joins a cell of renegade Theosophists for a seance, things start to go terribly wrong and Harry finds himself caught in a battle between occult powers, with strange enemies and stranger friends. It will take all his deductive skills - and skill at throwing a killer punch - to survive against the all-too-real arts of necromancy....

Broken Meats is the sequel to The Elder Ice, described by critic ST Joshi as having "smooth-flowing prose, crisply delineated characters, effective portrayal of the historical period, and a powerful horrific climax".

What listeners say about Broken Meats

Terrific adaptation of a cracking story

Would you listen to Broken Meats again? Why?

I expect I will. It's great to hear Harry Stubbs brought to life so vividly.

Well, it has to be Stubbsy, really. I like his slightly self-deprecating, understated way of going about things, and his fundamental decency.

I like how well he captured Stubbs, and also thought his portrayal of Yang was pitched very well, and really brought across the subtleties of the character.

I spent a lot of time nodding in appreciation, if that counts?

A smart and understanding adaptation of a well-written and entertaining tale. Can only recommend.

Even better than the first Stubb's story. The Elder Ice was a great story, but Broken Meats is a superior sequel. The first half moves a little more slowly, but the colourful characters and period atmosphere draw the reader in, and the climax is spectacular. H.P. Lovecraft entertainingly reinvented; a pulp horror story-line with vivid characterisation and added depth of well-researched biographical sources.

this is a real pleasure for a Lovecraft fan and with the impressive characterisation from Gethyn Edwards, you have the whole package.

Being a SARF London Boy myself was just the icing on the cake!

the story is classic 1920s Lovecraft with a real London twist!

A fantastic listen all the way through.

This book was given to me free at my request and I provided this voluntary review.

Another fantastic Harry Stubbs adventure.
The story is a follow on from the first book but could just as easily be read/listen as a standalone story.
It grips you from the start and continues throughout with turns and intrigue aplenty.
Once again it is well researched and in keeping with the time period and customs.

Narrator has changed from the first book, a smoother voice this time with less of a cockney accent and voiced a little raspier.
Character voices are well done and distinct throughout the book.

I am looking forward to the next instalment of Harry Stubbs (this is a guilty pleasure now).

The second of the Harry Stubbs audiobooks, and what an improvement in narration! Gethyn Edwards really brings Stubbs to life in this thrilling homage to The Case Of Charles Dexter Ward.

The story is tautly written and rich in suspense, action and atmosphere. Harry Stubbs is a brilliant addition to the world of pulp horror, and I can’t wait to start his next adventure.

Very entertaining and a fun follow-up to the first Stubbs novel. Good mix of tension, humor, and enjoyable characters.

If you could sum up Broken Meats in three words, what would they be?

Can't be done. The story has too many facets to chop down into three words. that is a completely preposterous question.

As always, Harry's tale keep you completely enthralled. i cannot wait for Alien Stars: A Harry Stubbs Adventure to come out.

Normally i have an issue with an audiobook switching narration; but this guy is pretty close to the original narrator. HOWEVER, i do not like that they changed Arthur's voice, by changing the voice you changed his whole persona!!! with that said, the voice did for Mr. Yang was fantastic.

it kept me very entertained.

If you love Mythos adventure stories, this book is for you. LOVE this series.

I'd recommend this book because it is a fresh story weaving history with eldritch horror.

Which character – as performed by Gethyn Edwards – was your favorite?

I liked the seance scene. It was very evocative.

I hope that Harry will have many more adventures.

"Broken Meats" - This is a description of a type of meat you could purchase from an English butcher. (circa 1900-1930 approx). It refers to the bits & chunks of meat that would go into a sausage.
It might also describe what a particularly nasty evil-magician might do to the human body of a victim.

The first book was based very loosely on H.P. Lovecraft’s story: “At The Mountains Of Madness”.
It's more like a look-see at what might have happened after that book’s events.

This one, book II in the Harry Stubbs adventures, is based on H. P. Lovecraft’s finest book-long chiller: “The Strange Case of Charles Dexter Ward”.

This adventure takes place in Ye Ol’ London Town where our two-fisted hero is being paid to be guide and guard a Chinese gentle-man from an occult society. He encounters a blind Chinese strangler, sits in on a seance that goes terribly wrong, and must defeat a phantom that was raised from the human salts of the late black wizard who just might have been “Jack the Ripper”, among other dangers.

The finale of this hair-raising tale has Harry Stubbs put on a pair of bronze knuckle dusters and travel down-ward into some deep dark catacombs and take on the mutant-experiment-gone-wrong-creature from the 1991 low-budget horror flick “The Resurrected”. Yeah, the really creepy one that was held in the sub-sub-cellar-tomb-crypt in the hole in the stone floor. Same sort of horrific thing as was in the Lovecraft horror story this book is based on - “The Strange Case of Charles Dexter Ward”.

It’s a great thriller and puts you in the mind of a muscle bound pugilist as he follows the twisted and blood-chillin’ story line of Charles Dexter Ward. I often wished the main character in H. P. Lovecraft’s stories be a rugged fighter instead of an intellectual detective. If you have to duke-it-out with a monster you should come ready and able to do so. Yet even then, a simple human retired boxer may not be enough to take on such supernatural forces.

I highly recommend this book.

Another enjoyable adventure with Harry Stubbs. I like the fact that Harry is an every day guy finding himself in unusual supernatural situations. I also like the time period that these series takes place. Solid performance from the narrator. I received this audio book from Audiobook Boom for my unbiased review.

I really enjoyed the first book, The Elder Ice. So, naturally I was eager for this one. Tough as nails Harry Stubbs rides again! The story was well written and is very engaging. The dialog is great and I thought the narration was perfect for the content. My only complaint is that I wish these books were longer.

The HARRY STUBBS series is probably the best H.P. Lovecraft fiction which is currently on the market today with the possible exception of Andrew Doran by Matthew Davenport or my own Cthulhu Armageddon (I tell it like it is). This is because it dials down the squid and the splatterpunk horror elements so many authors dial up to return to the occult mystery element that Lovecraft's best works were famous for.

Basically, the appeal of Harry Stubbs is he's actually fairly outside of the occult weirdness of your typical Lovecraft protagonist. He often encounters cultists, the weird, and the supernatural but rarely gets face-first with the horrors of Yog-Sothoth or the Elder Things. The first book, Eldritch Ice, had him mostly deal with the attempt to get a Antarctic expedition going versus actually reaching the Mountains of Madness. Yet, this actually makes it more interesting because you never know when the other shoe will drop.

In this book, it's vaguely related to THE STRANGE CASE OF CHARLES DEXTER WARD, the Theosophy movement, seances, and Sax Rohmer's Fu Manchu (except not really on that last part). Harry Stubbs is hard up for cash and ends up hiring himself out as a tour guide to a mysterious Chinese visitor who gets him involved with a man who claims to be able to raise the dead. This is after, conveniently, a local pimp claims to have murdered an already dead man in Harry Stubb's presence.

The story is good from start to finish and feels like an exceptionally well-researched Chaosium module for the old Call of Cthulhu gameline from the eighties. As for the audio, it is crisp and well done with the narrator doing an excellent job throughout.