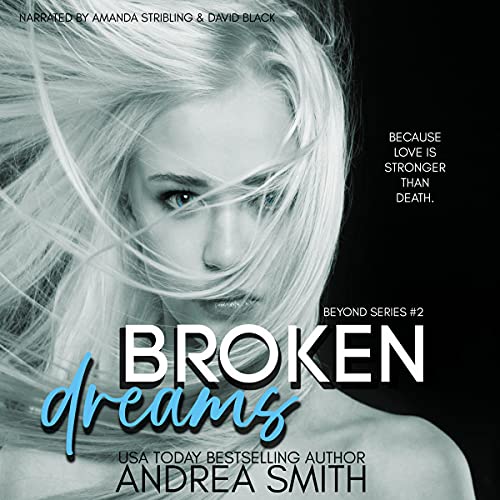 By: Andrea Smith
Narrated by: David Black,Amanda Stribling
Try for £0.00

I had some dreams they were clouds in my coffee....

It's 1974 in Evanston, Wyoming. Cece Adams, a popular cheerleader loves her bad boy next door, Erik Laughlin, a local rocker. They've had their share of ups and downs, but things have turned around for them. They have their dreams after all. And Cece has some news for Erik.

But Erik never gets the news because Cece never arrives at his Valentine's Day gig. There's been a car accident and Cece is dead.

Parrish Locke, a 27 year-old model, has only recently discovered she has a gift. It's a spiritual one she sometimes wish she didn't have. It's...complicated. But when stalled souls reach out to her, she can't say no to helping them resolve their unfinished business.

Broken Dreams finds Parrish back in the 1970's, in the small Wyoming town where Cece lived and died as a result of a car accident one snowy night. But Parrish knows this isn't what really happened. After 40 years, how will she convince authorities there is more to the story?

USA Today Best Selling author Andrea Smith gives you the second installment in her "Beyond Series," which is sure to keep you turning the pages!

Parrish Locke is up against her first solo mission for justice, and she gets some unexpected help from a hot FBI agent in the process.

One relationship fizzles, while a new one sizzles!

What listeners say about Broken Dreams

Broken Dreams is the second book in the Beyond Series and it fully measures up to the first. Parrish Locke has a gift, perhaps a curse, that allows her to inhabit the ghost of someone stuck in limbo, trying to tell their story. Cece is a 17-year old junior and is in love with her best friend, Erik. She was on her way to tell him something important when she encountered tragedy along the road. A psychotic classmate intended to make her pay for dropping him and he had a devious plan. Cece's death is ruled a tragic accident but, when she joins forces with Parrish, all of the truth comes to light. To prove that it was murder, Parrish needed help from the FBI and she ended up "working" with Agent Marco Trevani. They were facing their own personal demons but, when they were together, they were combustible. A no strings relationship was what Parrish said she wanted, but her heart got involved. Marco, on the other hand, was unlikeable and almost emotionless when he admitted that he had other women. He was harsh when he argued with Parrish, telling her that he was only doing what she wanted. There was something so wrong with his insensitive attitude, especially since Parrish's ex had just cheated on her. It's a personal issue for me and it probably won't bother you at all. After the case is cleared up and Cece is allowed to cross over, Parrish decides to change her life and leave modeling behind. Her father has a ski chalet and he could use some help! Marco somewhat redeemed himself by taking a new job near her, and they do have a HFN ending.
This audiobook was narrated beautifully by David Black and Amanda Stribling. Their voices and passion brought the story to life!