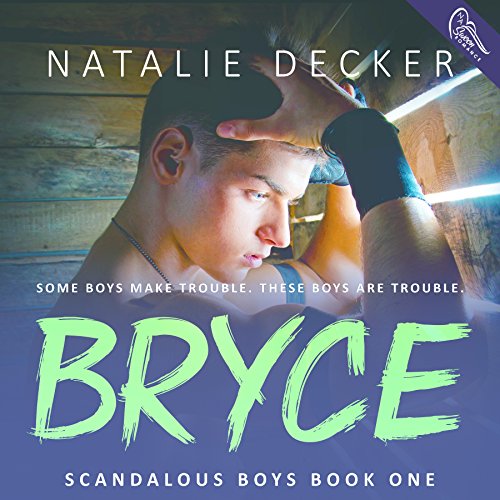 By: Natalie Decker
Narrated by: Hayden Bishop,Douglas Berger
Try for £0.00

Bryce Matthews doesn't do the whole nice boyfriend thing. Chocolates and flowers - girls can forget all that. And he certainly doesn't care about the gossip and rumors that follow him at school and around town. If anything, the talk amuses him.

Bryce isn't lacking in confidence. He knows himself, and he knows his limits. One of those hard limits is Madison Issac. Bryce can never have her, and he's perfectly fine with that. Sometimes the fantasy is better than the reality anyway.

Madison Issac thought she was a pretty good judge of character. But she's surprised at how gentle and comforting resident bad-boy and next-door neighbor Bryce Matthews is when he finds her crying in the park.

Maybe there's more to Bryce than people think? Madison begins to wonder. Can a guy like Bryce ever change his ways? Can a girl like Madison really be into a guy like Bryce? With hearts and reputations on the line, this kind of love can be scandalous.

What listeners say about Bryce

Loved the story, but I feel it was overly drawn out. For an audio book not impressed. Listening for the same hours I would have used to read the book.

It's not exactly bad. However...

Characters are underdeveloped. Their thoughts and behaviours ran all over the place. Too much back and forth; and the ending was abrupt and dissatisfying.

Started out really well. I had the feeling I was listening to a good steamy bad boy romance then it suddenly transformed into a book for fifteen-year-olds. There’s really no steamy moments. Other than one minor description from Bryce’s male POV, the author doesn’t describe more than a few kisses, so don’t get your hopes up. The characters have little to no depth while the plot gets increasingly irritating with their hot and cold behavior. At times, the dialogue is really confusing. Time is constantly skipped over in weeks and months, and summaries are given to catch the reader up. By the halfway point, the plot is literally all over the place. There’s potential here, but this manuscript needs a major overhaul.

This wasn't my most favorite story I've ever heard but it wasn't the worst. I liked the characters in the book and the story wasn't bad for the most part. I just think it was a little rushed and wasn't executed right. It would have been better if the author would have timed things out better. If it wasn't in the Romance Package for free, I would have skipped it. The male narrator was good but the female made most of the people sound the same. Could have been better. I will move on to the next one to see how it is. I'm kind of invested in the characters, now despite how bad the execution of this story.

Audible Review: I am not usually a audible person. I would much rather read a book than listen to it. This one was read really well.

Story Review: This book was an okay YA/NA story. The characters were a little annoying and immature. Yes I know they were high school kids but still. I am not sure if I will finish the series

I never stop reading or listening to a book because I hate not knowing how things end but I honestly contemplated not finishing this because it was hard to listen to. Real people don’t act like this. The two different perspectives felt like they were written by two completely different people. The male narrative was better but still this was confusing. The emotional whiplash of “no we can’t” to “I have to have you” was exhausting. And the ending was so abrupt that I didn’t realize it was over until I was being thanked for listening. Overall I don’t recommend.

It wasn’t my favorite but not terrible. Had a really strong beginning and had a lot of potential to be a good book but the story line almost felt rushed. The build up to the love story wasn’t there for me. But for a free book on audible, it was decent.

I absolutely hated the storyline. The scene with her first time was cringe worthy and unrealistic. This book had potential but it missed the mark for me.