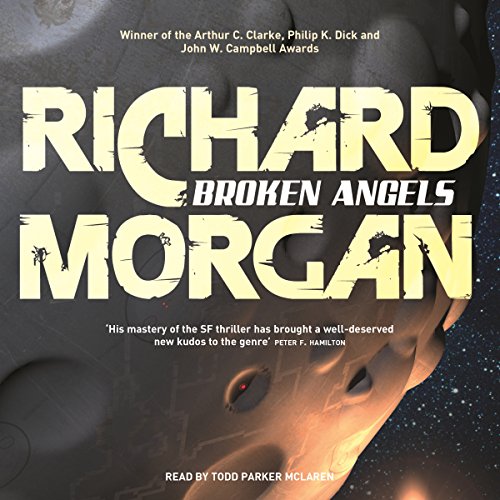 By: Richard Morgan
Narrated by: Todd McLaren
Try for £0.00

Fifty years after the events of Altered Carbon, Takeshi Kovacs is serving as a mercenary in the Procterate-sponsored war to put down Joshuah Kemp's revolution on the planet Sanction IV. He is offered the chance to join a covert team chasing a prize whose value is limitless - and whose dangers are endless.

Here is a novel that takes mankind to the brink.A breakneck-paced crime thriller, Altered Carbon took its readers deep into the universe Morgan had so compellingly realised without ever letting them escape the onward rush of the plot. Broken Angels melds SF, the war novel and the spy thriller to take the reader below the surface of this future and lay bare the treacheries, betrayals and follies that leave man so ill-prepared for the legacy he has been given: the stars.

This is SF at its dizzying best: superb, yet subtle, world-building; strong yet sensitive characterisation; awesome yet believable technology, thilling yet profound writing. Richard Morgan is set to join the genre's world-wide elite.

What listeners say about Broken Angels

I really enjoyed the first novel, and while the second has a very different fell its every bit as good. Solid story, a few throw backs to the first novel, but no enough that you need to have read the first to enjoy it. The universe that Morgan has created here is really interesting and I hope to see a few more books in this series

Excitement by the fistful.

I listened to Broken Angels barely daring to breathe for fear I would miss one of the twists and turns of this full-on space drama. Richard Morgan is a superb storyteller and uses all his skills to relate another Takeshi Kovacs tale. If you liked Altered Carbon, you will love this. The fan contract is fully satisfied.

Very different to the first book.

It was enjoyable enough but I preferred the 50's detective style of the first one.

After listening to Altered Carbon I saw the lukewarm reviews and decided not to get it. A few years later I changed my mind and in my view it is at least as good as its predecessor, if not better. The narration is first rate, the concepts are clever, and it's entertaining to listen to from start to finish.

So much more than the Excellent TV Series.

The TV series has departed from this book by a considerable margin. There are bits and pieces that are the same but it is actually on a much more epic scale.

It promises more information on the “Martians” if that is what they truly are but actually just wets our appetite for more.

Clever plot twists, plenty of thought provoking concepts on what it would be like to live forever.

The book is well read - the narrator keeps us on our toes with a gruff voice.

Great performance, and the story was enjoyable in itself, however it didn't share much of the original, the crime thriller is gone, replaced with an epic sized cross-space adventure

Enjoyed it, but the first was more to my tastes.

The first book was cool, but this one I couldn’t get into at all. Boring!! Returned it.

As good if not better than Altered Carbon

Hats off to Richard Morgan on Takeshi Kovacs second outing! A great mixture of politics, philosophy and psychology with a sprinkle of sex and violence. Absolutely brilliant!

It a good book and story. The performance is ok, although the are some significant irritations once you notice them. The main one being the pronunciation of Maori it took a while to realise the all the number of times I heard "May-ori" that it was meant to be Maori and it's something you'll wish you could un notice and it becomes annoying. There are others too. It's a shame I would have expected a little from a professional production

Astounding series! I wish Netflix had taken this book as the second season to which I doubt it would’ve been cancelled but hey ho, the books are amazing and Todd smashes it every time! Will 100% be listening to this series multiple times

Altered Carbon was very good so I went into this one for more of the same, but, it simply wasn't. This was an okay book, don't get me wrong, but that's it. It felt predictable and Kovacs didn't feel consistent, like this was originally a story meant for a different character, and then Kovacs got shoehorned in

It is a great story. Todd does a very good job.

Loved the tv series. Decided to give the books a chance. Does not regret it and will listen to more. My only reservation has to do with twists in the plot that only serve as chock effects.