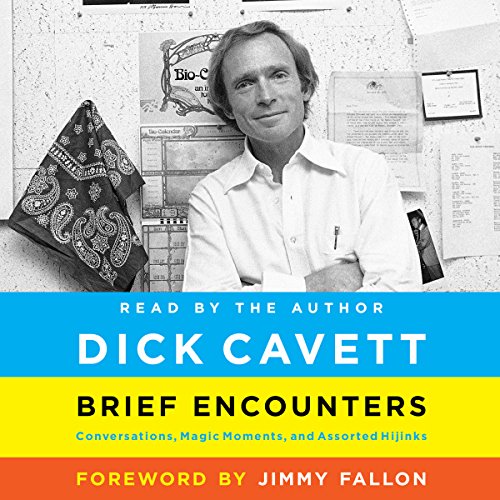 Dick Cavett is back, sharing his reflections and reminiscences about Hollywood legends, American cultural icons, and the absurdities of everyday life.

In Brief Encounters, the legendary talk show host Dick Cavett introduces us to the fascinating characters who have crossed his path, from James Gandolfini and John Lennon to Mel Brooks and Nora Ephron, enhancing our appreciation of their talent, their personalities, and their places in the pantheon. We tag along as Cavett spends an afternoon with Stan Laurel at his modest apartment in Los Angeles, spars with Muhammad Ali at his training camp, and comes to know a young Steve Jobs - who woos him to be Apple's first celebrity pitchman. He also offers piquant commentary on contemporary politics, the indignities of travel, the nature of comedy writing, and the utter improbability of being alive at all.

On his talk show, Cavett welcomed the leading figures from film, music, theater, literature, comedy, sports, and politics and engaged them in conversation that made viewers feel that the discussion was taking place in their own living rooms. Jimmy Fallon, the new host of The Tonight Show, has called him "a legend and an inspiration" and has written a foreword that makes clear the debt that today's talk show hosts owe to Dick Cavett. Brief Encounters opens the door on how Cavett's mind works and what it is like to live in his world.

To spend a few minutes or an hour or even a whole evening with Dick Cavett is an experience not to be missed, and now there's no reason to deny yourself. Settle in, and enjoy the conversation!

Though I grew up thinking of Dick Cavett as an insufferably pompous, self-aggrandizing bore, and though that opinion was later confirmed (in spades) when I listened to his appalling 92nd Street Y interview with Martin Short, listening to Talk Show and now Brief Encounters has made me an improbable, late-in-life Cavett fan. I am really going to miss his voice and his (sometimes myopic, but always interesting) opinions and his (almost always very interesting) stories. If he still writes a column in the Times, I’d love to hear/read his columns from and about our current lamentable political era. I found this book (which, like Talk Show, is a compilation of his NYT columns) to be as good as Talk Show, and sometimes better. His final stories, about dealing with alcoholic friends and colleagues and about nightmares, were my favorites, and the very last anecdote, about the time he (nightmarishly) found himself lost in rural China with no language skills, no guide, and no means of rejoining his wife on their riverboat cruise, was unforgettable. I’m still thinking about it and describing the incident to skeptical friends and family. I now dearly wish that his first book, Cavett, was available on Audible.

Cavett at his best

What did you love best about Brief Encounters?

Cavett's style. He obviously enjoys being the smartest guy in the room. He has had a fascinating life and he shares it in perfectly sized doses.

Which character – as performed by Dick Cavett – was your favorite?

He did them all very well.

No- you don't want to use it up too quickly.

His sniping at conservatives- Cheney, Palin, Limbaugh- comes off as petty and dated.

Lifeless, boring fought through it, just. Was hoping for a lot more.
Want my credit back... :(

Didn’t want it to end

Most interesting stories about interesting people. Do disagree with Cavett’s view on home schooling I wonder if he still feels that way.

back in the old days

I love his style as an interviewer and I enjoyed the listen, he is so funny and particular tp the English language

Was decent until he got into the psyco-babble

Somewhat interesting until he gets into psyco-babble and philisopic-babble and his thoughts about the brain and dreams. Then he went off the deep end in a perfect example of 60's bull crap.

Dick Cavett seems to be one of the brightest, self effacing and interesting people on this earth. His stories are chock full of funny and interesting stories from his funny and interesting life. His wit and brilliance shine through in his performance and content in every spoken word (true about all his books). If he hadn't led the life he has he would have been an incredible professor...he has a way of capturing ones attention and imagination and you find yourself hanging on every word. To spend an evening in his company must be a very memorable and pleasent experience. Thank you for sharing.

Where does Brief Encounters rank among all the audiobooks you’ve listened to so far?

Dick Cavett reads this collection of his NYT columns with such perfect delivery that you almost forget that he is a master of the spoken word. Every chapter is engaging, and Cavett manages to teach you about some much without even seeming to. A must listen!

What did you love best about Brief Encounters?

His articulate and nuanced perspectives on show business and the lives of those he met while in it.

What was one of the most memorable moments of Brief Encounters?

His memories of Richard Burton.

Who would you have cast as narrator instead of Dick Cavett?

Though his voice tends towards the monotone he emphasizes his own attitudes more clearly than I think others would have.

While I'm a conservative and he's clearly a far left liberal with a touch of NYC's Upper East side snobbery I found the audio (mostly) delightful. Maybe it's because I lived on NYC's Upper East side for a number of years or, more likely, he's a clever fellow whose had the great fortune of meeting many Hollywood greats and has a unique and often unexpected perspective on life.

I really lovced this memoire. So witty! I need to listen to more of Dick.