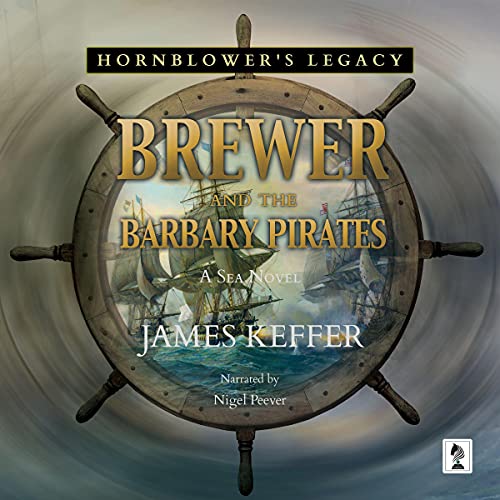 Brewer and the Barbary Pirates

By: James Keffer
Narrated by: Nigel Peever
Try for £0.00

It is said that a man is grown by his past, and so it was with William Brewer. Before he took command of HMS Defiant in a hurricane and before he hunted pirates in HMS Revenge, Brewer endured a crucible of fire that molded him into the legend he became.

Fresh from the tutelage of Napoleon Bonaparte on St. Helena, Brewer signs on for a cruise under Captain Bush in HMS Lydia to the Mediterranean to battle the Barbary Pirates. Here, Brewer learns to fight, but he also learns what it means to command men in battle and what it takes to order men to their deaths.

Their enemy is a Scottish renegade who is responsible for the deaths of dozens of his fellow sailors over the years and the selling of hundreds of Europeans into African slavery. Along the way, Brewer is introduced to new heroes and new devils. He also receives sage advice from no less than the Duke of Wellington himself. In the end, Brewer has to use all he’s learned - not to mention going beyond all that - to save HMS Lydia from total destruction at the hands of pirates.

What listeners say about Brewer and the Barbary Pirates

another superb story which takes you back in time and you sail with William Brewer, get ready for another adventure with danger around the corner from pirates.

Awesome! Exactly how an audiobook should sound

Once again another stunning production from the studios of Nigel Peever. Each character was believably realised and with the authoritative narration, music and authentic sound effects, the whole thrilling adventure was brought to life fantastically.

In this book we delve deeper into Brewer's backstory and learn more about what makes him tick. If you're familiar with book 1 and 2 then expect a few "aha!" moments as pieces slide neatly into place. That said, this book can easily be enjoyed without knowledge of the first two novels. Once again this is a fast paced novel with crisp dialogue, well fleshed characters and a thoroughly enjoyable plot.

Nigel Peever's narration is superb with even more character voices than ever before and through his careful use of sound effects and you'll find yourself immersed in the heat of a battle before you realise. I only wish more audiobooks were of this high standard.