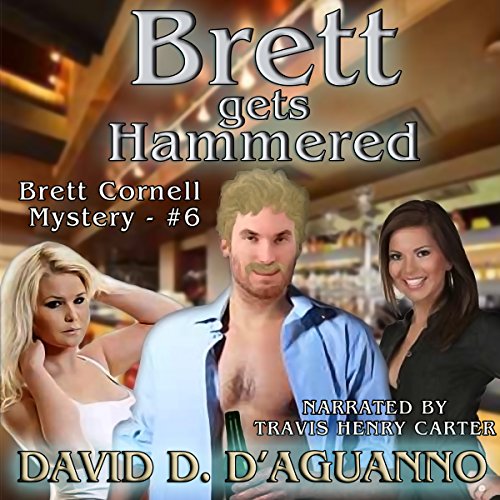 The beautiful and alluring Tammy Rankin and her brother Andy were positively grief-stricken when their well-to-do father died of a fatal heart attack. In fact, their grief was intensified when they realized that their young stepmother stood to inherit his vast fortune - that is, unless they could somehow suggest foul play and pin a murder rap on the woman, notwithstanding her probable innocence.

They obviously needed to enlist the services of someone who was totally devoid of any amount of scruples whatsoever.

A perfect cue, then, for the entrance of self-proclaimed unscrupulous bastard Brett Cornell who, as expected, is instantly attracted to the prospect of getting his own greedy hands on a portion of the Rankin inheritance - and on the lovely Tammy Rankin herself!

However, will his unscrupulous nature alone, coupled with his stunning Adonis-like features, be enough for him to pull it off? Especially when he's been spending the last few months of his life in a state of almost constant inebriation?

What listeners say about Brett Gets Hammered

Happy as pigs in a poker game

"Happy as pigs in a poker game." To know him is to love him, at least for the female of the species - that, at least, is Brett's perception of those beautiful young things just waiting to catch the eye of the blond haired and gloriously moustachioed Adonis (whatever that is), the one and only, the unscrupulous bastard, Brett Cornell. But since the charity boxing match (which he lost) some months ago, he's also lost his secretary, is nearly broke and, well ... Then into his life steps the delectable Tammy and her wimpy brother Andy, offering good money if he will restore their rightful inheritance - their very wealthy father had left everything to his dying wife, their stepmother, and they want it all, whatever it takes. Cue our unscrupulous bastard. With dollar signs, and beautiful babes, dancing before his eyes, Brett is invited to dinner with the family - "Better than HBO and Showmax", Brett thinks - but soon discovers that his unscrupulous bastard title is rivalled by another in the party. Another superbly funny book in this hilarious series. Once again, Travis Henry Carter is Brett as he recounts, in first person, the unfolding events of his less than P.C. approach to life, self obsessed, egotistical and sarcastic, with a total conviction of his sexual prowess. The narration is perfect, as always, revealing the Brett beneath the surface as well as giving very distinctive voice to all of the other protagonists, both male and female. Brett might not be someone to meet in real life, but interpreted by Mr.Carter from the pen of David D. D'Aguenno, this is a character to encounter with fondness and fun. I was very fortunate in being freely gifted a complimentary copy of Brett Gets Hammered, at my request, by the rights holder via Audiobook Boom. Thank you so much. This has become one of my most favourite of series. Just goes to prove the old saying - every woman loves a villain. Don't read this book if you want everything P.C. Otherwise, just sit back, hold onto your metaphors, and enjoy.

Brett Gets Hammered is the 6th novel in the Brett Cornell series of Mysteries by David D’Aguanno and after I listened and reviewed another novel by this author, Why She Left Us, I reached out to him and asked for something else to read. As this series is driven by a character very unlike others in the industry, I was forewarned as to its faults and differences to other fictional regular private investigators, but I thought that I should give it a try as I find Mr. D’Aguanno‘s writing style very compelling. The first part of the plot sounds a little like any other out there, with a sudden death of a father and husband, a quite significant inheritance, a young step mother as the primary beneficiary and with the biological kids left out of it all. But, the kids are willing to go to extreme lengths in order to assure that they are getting their well deserved payday and they just need someone with less scruples than they have… Enter, self-proclaimed unscrupulous bastard Brett Cornell, our main character, the man who is ready and willing to break every law, cheat everyone and get as low as he can, just for a piece of the pie, or, in this case, the money! Maybe you think you know what’s coming, but, trust me, you don’t, or as another great author used to say, you know nothing! The plot is actually very interesting, the action moves fast and the jokes are 10 a minute. Brett is a drunk, a cheat, a thief, a misogynistic pig and a liar with his mind only on sex, money and how to get in bed with all the humans of the female persuasion, no matter the costs or the consequences. When you add that he is not the brightest bulb in the bunch and that at times he is really dumb, you might cut him some slack. At no moment what so ever should you take him seriously, just think of the story as a well-written parody. You’ll discover all his ”attributes” in the first five minutes with Brett Gets Hammered and you might be wanting to put the book down or to stop listening, but I think that if you give him a chance, he will grow on you. If you are offended by such characters and can’t stand them, this series is not for you, but if you just take it as a purely fictional story with a corn-for-brains main character, you will find yourself smiling a lot and enjoying it as well. Voiceover artist, actor and narrator Travis Henry Carter brings the audiobook version of Brett Gets Hammered to life with talent, intensity and a unique delivery. He reads the entire book using a wiseguy accent that gives it a complete level of immersion. He uses a large number of voices to entertain the listener and to help him keep all the different characters separate in his mind. There were no problems with the quality of the recording and I had a really good time listening. For those of you looking for a quick, funny and entertaining listen, I strongly recommend Brett Gets Hammered by David D’Aguanno and performed by Travis Henry Carter.

"Brett Gets Hammered" continues with action…it is fast paced and pulls you in from the first few pages. The author wastes no time with boring introductory stuff, instead we a thrust right into the hero, Brett Cornell’s, world.

The series continues with our favorite hunky stud muffin of a macho man. Those humans of the female persuasion can not get enough of this Private Dick and his Manly Man Testosterone laced antics. May Brett a young 36 stay young forever for after all someone needs to service those hot young sexy babes. This book was given to me for free at my request and I provided this voluntary review.

This is the first book I have read/listened to from the author. I found it fun and inviting. Brett is a man who stays inebriated and will do just about anything. He has no scruples. He is hired by the Rankin kid after their father dies. They want the inheritance and decide to frame their stepmother. This is where Brett comes into the scene. He will do what it takes as well as trying to seduce Tammy Rankin. The narrator, Travis Henry Carter, did a very good job. He brought the characters to life. Really enjoyed listening ti him. I was given this free review copy audiobook at my request and have voluntarily left this review.

Much more than a funny book!

I was expecting a funny listen, (and it certainly was) but this turned out to be an outstanding book. The hero begins as a misogynistic jerk, but to be turned off by that initially is a huge mistake. As the story moves along, you begin to realize what a brilliantly conceived character Brett is. Displaying all the traits of sociopathy, yet somehow endearing and hilarious with all the quirks and characterizations. He reminds me of Sherrif Nick Corey from Pop 1280. The book is driven by this character, but the story is great too. Craftworthy writing, good characters, plot, etc. Totally solid. So you end up with an uncommonly good book and an unexpected aftertaste of literary merit. I am really glad I stumbled across this one. Fantastic narrator too! Highly recommended.

As usual, the unscrupulous bastard, in David D'Aguannos Brett Cornell series, doesn't fail to deliver! Lots of funny moments and an overall great mystery novel! The narration was great like always. I don't think I'll ever get tired of having Travis Henry Carter narrate Brett. he does such an amazing job and makes me laugh the whole way through the book! I was given this Audiobook for free in exchange for an honest review.

David D’Aguanno and his amazingly written creation of a beautiful series partnering with the Narrator Travis Henry Carter have made the impossible, the perfect audiobook series! Really, nothing more to say to this awesome masterpiece only that I’m having no problems given it five stars and absolutely having no problems recommending this series with a promise that you won’t be disappointed. Fully recommended !!!! By me.

unscrupulous -and proud of it!

So, I know that this is book 6 in the series and while I do think it can be read as a stand alone there is clearly a past that I was not aware of that is hinted about in this read. Even with that little bit of confusion (which again I was prepared for) I really enjoyed the story line, the cocky, over the top behavior and attitude of Brett is SO over the top it's hilarious and major, major kudos to Travis Henry Carter who did an unbelievable job with the narration. He truly brought this character to life. A good story line with twists and humor that will keep the reader / listener engaged. A fun read / listen! This book was given to me for free at my request and I provided the voluntary review.

"This book was given to me for free at my request and I provided this voluntary review." I was very entertained by the story and narrator. It was light and funny which is what I was looking for and listened straight through while I worked. I will definitely listen to more in the series.

I am really enjoying this series! The narration was great. The author did a great job with the character builds and plot. This series is one you don't want to miss! I look forward to reading more books in this series. I was given this free review copy audiobook at my request and have voluntarily left this review.