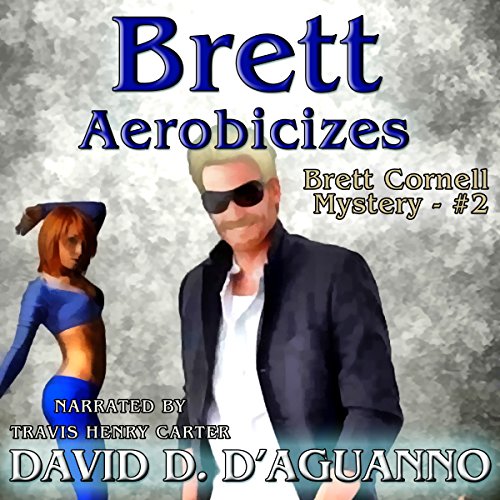 A man is found dead with a bullet hole in his chest, and private detective Brett Cornell is the number one suspect. It might have something to do with the fact that there were witnesses who had seen him punching the guy around only a few days earlier. Or - more likely - it might be because the police have discovered that the fatal bullet had been fired from his gun!

In the second novel of this detective series set in the late 1980s, self-proclaimed unscrupulous bastard Brett Cornell has to figure out who's trying to set him up: Could it be his lovely but meek new client? Or perhaps her equally lovely but far-from-meek roommate? Or might it actually be the beautiful and dynamic aerobics instructor he's recently taken up with?

In the meantime, Brett's legendary, Adonis-like features get severely damaged when he ends up catching the beating of his life - emotionally as well as physically - before he finally nails the identity of the real killer!


The cocky bastard and private detective Brett Cornell is back in 2nd book in this series. it is a mixture of humor and mystery/ thriller

I just want to smack him!

This is the second book starring the unscrupulous bastard and P.I Brett Cornell

Once again Brett's ego gets him into a whole lot of trouble. In this book Brett Cornell is involved with a love triangle and a police investigation where he is the prime suspect. The police tell Brett it is a bullet from his gun that has killed the guy that Brett had a fight with a few days earlier. Brett's job is to figure out who killed the guy.Obviously he is being framed, but by who? It is a suprise when he/we find out who it is.

Brett as always is so full of himself no-one else really matters, he plays his women off against each other, treats them abysmally and they still come back for more.
Very enjoyable read and Travis Henry Carter is fantastic.

Still dreaming of retiring in four years time with loads of money and even more women to perform his every request, the self proclaimed unscrupulous bastard and P.I., Brett Cornell has a new client, Marilyn, the fiance, no less, of his arch enemy, the pugnacious policeman, Ralph. She is very attractive and, she tells him, still a virgin. Definitely seen as an open challenge by Brett. Even better, she also has a gorgeous room mate, Ginger.

All goes very well for Brett ("if you catch my drift") until he first gets badly beaten and loses part of his ear, then becomes prime suspect in a murder.
Told from the point of view of Brett himself, the antics of this self absorbed, egotistical, rude, crude, insensitive, narsasistic brute of a man may not be politically correct but sure is very funny. And he is perfectly captured in the narration of Travis Henry Carter as he reads with understanding and emotion and great intonation and pauses. His voicings of the other characters is also superb, especially those of the several women in the tale: he has a full cast seemingly at his disposal. A remarkable performance.

This is not a book for the easily offended: Brett really is a disgusting example of manhood. But for sometimes laugh out loud antics of this sex crazed moustachioed 'hero', this book cannot be beaten..

It's impossible not to love this book, in fact it's impossible not to love the whole series!
My only warning is that if you got a broken rib and don't want a world of pain then you should wait because even without a broken rib there will be some pain involved with so much laughter.
All I can say is that this is not your usual book, there was a lot of thinking done in writing those great books.
I'm totally in love with this series, there is no equal for Brett and probably will never be !!!
Absolutely recommended !

This story is hilarious. The author has a special humorous. The main character, Brett, is a real specimen (womanizer, jerk…). Honestly, Brett's attitude is too gross to be mad about him! The narration is great. I received this free review copy audiobook at my request and I have voluntarily left this review.

Perfect narrator and a great story.

What made the experience of listening to Brett Aerobicizes the most enjoyable?

The narrator's characterization of the main character was spot on and the story was compelling and fast paced.

What other book might you compare Brett Aerobicizes to and why?

The Stone Barrington series by Stuart Woods. Life just happens to Brett and he also has no luck with the ladies.

I liked the ending, which I won't spoil. Brett's banter with the lieutenant is a close second. He's so arrogant in situations he doesn't control, it's funny.

It made me laugh. I didn't cry.

Travis Henry Carter is now Brett to me. D’Aguanno followed some unexpected patterns and the dialogue is top notch. There’s a chemistry between Brett and the characters in the world not as apparent in the previous book. He still has disdain for some people and attraction to others but his interaction with Marilyn at the start of the novel is a good example. He notices everything about her. Of course, she’s attractive so he would but there’s almost a romance to his appreciation of her as a sexual object. These are the times when you can be sure that Brett has a soul. More than the first novel, Brett notices everything and his observations are frequently downright hilarious.

This is the 2nd book into the Brett Cornell Mysteries and if you enjoyed the 1st one, you should enjoy this one just as much! It had a few reoccurring characters from the first book and more suprises and twists!

Travis Henry Carter is such a perfect narrator for this series and I feel like he really makes the character come to life.

I know that there will be some people who will be turned off by Bretts demeanour and how he goes about treating women. I see the story almost as if I'm at a bar and some guy thinks he's a hotshot and is telling me his story. that guy would be Brett and I would just think he's full of himself and to not take him so seriously. I don't in anyway think the author is like the character he writes.

Brett Aerobicizes is a funny mystery book and I can't wait to read the next in the series!

I was given this Audiobook for free in exchange for an honest review.

It's hard not to see Guy Fieri on the cover of this book, but I think that Brett is a much different character than him. Looking past the looks (though Brett talks about his looks continuously throughout this book). Brett is a self-described &quot;unscrupulous&quot; male who has an above average sex drive among other things.

I would warn you away from this if you don't like sexist remarks towards women -- there are a lot of them (even if made in a joking way).  And Brett himself could be offensive to... most of the women that I know.  I think that he is written for a very specific inner male voice (and sometimes outer depending on the guy).

Looking past the sexual remarks and the personality issues that I had with Brett -- this story was better than I expected.  I wasn't sure what I was getting into especially when the first hour was basically about his sexual prowess.   After we moved past that, the story took a turn for the good.  It got interesting and actually pulled me in.  The &quot;whodunit&quot; aspect of a book about a private eye always intrigues me and this book had a good amount of it.

The narration was done by Travis Henry Carter -- who did it in what I would call a Boston accent.  It seemed to match Brett's personality, though not the place that he resides and works.  I don't know if this was covered in book one, but if it was that would make more sense to me.  His narration was good though and his female voices were much better than most male narrators can pull off.

Overall, a book with a few flaws in it but something that I did enjoy reading.  Something that was a little out of my wheelhouse with books and I'm glad I took a step out to enjoy it.

I was voluntarily provided with a copy of this book. It has not affected my review in any way.

I enjoyed it. The narration was excellent. The author did a great job with the characters and plot. I look forward to reading the other books in this series. I was given this free review copy audiobook at my request and have voluntarily left this review.

these books are absolutely fantastic. Brett is a character you just can't help but love, even though you really want to hate him.

Brett is an inappropriate, womanizing, egotistical idiot! A private detective and a caricature that has you putting your politically correct hat aside and just laugh at the things he says.
The narrator did a fantastic job with the voices, the attitudes and storyline.
Need a laugh? Here’s a great place to have one.

Interesting listen and a good mystery.

First, I have to start off by stating that I got this book free of charge in exchange for a review, but as I always state, this does not in any way impact my review. My reviews are always honest and my own.

I hope Brett never grows up, and stays a "Legend in his own head" for years to come. You think it's only younger guys who treat women like throwaways, but I hope Brett keeps cheating on women and doing his thing forever. After all, if he weren't such an obnoxious prick, his actions wouldn't be nearly as funny. Some characters from the first book reappeared, and I adored the thoughtfully drawn secondary characters in this second of the series. If you have a sense of humor, you'll love Brett Cornell and the writing of David D'Aquanno.

Every Woman wants a piece of Brett

Our Macho man hero brought to real life by the magical Dynamic Duo of Writer and Narrator is a antidote to the current Trump
World of Subpoenas or( subpenises) Constitutional crises,Twitter rants, and all other disgusting conduct coming from Washington and the White House.


May this special Coupling continue to deliver The Brett Male Hormones to every Ovulating creature craving a wild night with
our unscrupulous hunky charming bastard.


Not only yummy sexy and extremely hot young Humans of the female persuasion need Brett but all of us need a good laugh.

This Book was given to me for free at my request and I provided this voluntary review.