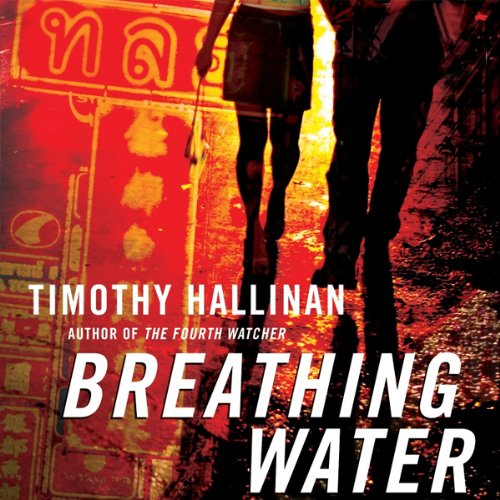 A late-night poker game in Bangkok nets American ex-pat writer Poke Rafferty the "opportunity" to write the biography of Khun Pan, a flamboyant, vulgar, self-made billionaire with a criminal past and far-reaching political ambitions. Within hours, Rafferty, his wife, Rose, their adopted daughter, Miaow, and Poke's best friend, honest Bangkok cop Arthit, have become disposable pawns in a brutal power struggle among some of Thailand's richest, most ruthless citizens.

There are those who would go to any length to ensure the book is never written and others equally desperate to have Pan's darkest secrets exposed. Suddenly, Rafferty is sinking deeper in a perilous sea of treachery and intrigue - and caught up in the inhuman machinations of an Asian baby-selling ring - as he searches frantically for the only chance he may have to get everyone he loves out alive.

"Cleverly crafted, masterfully written, characters and dialogue rooted in reality, Breathing Water offers fascinating insights into the dark side of crime in another culture. Written with the authority of one who knows life on the hard edge in southeast Asia. Another wonderful read from an author who knows his business." (Steve Martini)

Thai mystery will take your breath away

I recently discovered the Poke Rafferty series and have now listened to them all. Excellent and enjoyable series.

These books have a lot going for them. tight story, interesting characters lots of local color and a point that the author is making. They are not just mindless excursions.

Also, there is great heart quality just below the surface. May be my favorite series followed by Harry Bosch.

If you get into them don't miss the Queen of Pat Pong either.

What did you love best about Breathing Water?

As before I love how there is good in all the bad in the world and I can almost taste it in these books about Rafferty, his family and adventures. Although incredible crimes and horrific are committed that make these stories both exciting and sad, there is always good people and resistant.

What does Victor Bevine bring to the story that you wouldn’t experience if you just read the book?

Victor Bevine brings live to this story, I could not ask for one better.

The children. They adapt to life unthinkable living conditions.

Just read/listen to these books. They are very good.

Hallinan does it again!

What does Victor Bevine bring to the story that you wouldn’t experience if you just read the book?

Victor Bevine is a skillful and nuanced narrator. He channels Hallinan's Bangkok like a native. His characters are brave and subtle and compelling. He can make you laugh out loud or tear you apart with a whisper. Great writing deserves a clear and sympathetic voice.
Timothy Hallinan is a National Treasure and Victor Bevine is a loyal guardian of his prose.

If I were to make a film of the book the tag line might be: "Save your money! Listen to the audiobook!" And that's why I live on the East Coast.

About to download the next in the series. Thank you.