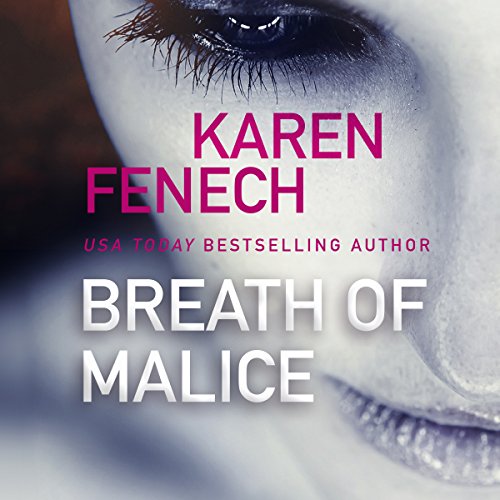 FBI special agent Paige Carson hoped she'd be able to start a new life in small-town South Carolina. But when a senator's sister is murdered and a blank postcard is left next to the body, Paige realizes that a killer from her past has found her - and is sending her a very personal message.

From the moment he hired her, FBI special agent in charge Sam McKade knew Paige was hiding something. Prompted by this recent threat, she finally opens up: one year ago, she caught the eye of suspected serial killer Todd Thames. Now he's come back to pull her into his game, whether she wants to play or not.

As the danger increases, Paige and Sam give in to their growing attraction, and he vows to protect her no matter the cost. But the murderer will stop at nothing to get to his intended prey, and the strong arm of the law - and the shelter of her new love - may not be enough to save her.

This was my first listen from author Karen Fenech, but it won't be my last! I enjoyed this suspenseful romance.

Paige is a know it all, new FBI special agent. Anxious to prove her mettle she makes a critical mistake while tracking down serial killer Todd Thames and destroys the case that the New York FBI division had been building against Thames.

Paige becomes a pariah among her colleagues and when she tells her boss that Thames threatened her when she testifies at his trial, she's met with incredulity.

Paige's self esteem is shattered as she flees to a small town hoping to elude Thames and restart her flailing FBI career.

Her new boss Sam, knows Paige is running from something, he's just not sure whether it's her past or something more!

I liked narrator Christina Traister, but I wasn't particularly fond of the stoic, low key voice she gave Sam, I mean he sounded liked he was never ruffled by anything! All the other characters she voiced though I loved!

Save your credit and buy this one.

Thrilling exciting edge of your seat read LOVE IT

What did you love best about Breath of Malice?

The character voices, action packed, thrills, even some very chilling times. The twists and turns. The plot a lot of thought was given from a very talented author.

This book has so many parts where you are let thinking OH MY, please don't do that. Paige's sister just about breaks your heart only seeing things her way because she is left out of the loop. There are times you will want to grab the character and pull them out of the book in hopes of saving them. Other times when you would like to get your hands on the killer who is playing these games. Yes you will have many places where you will have an extreme reaction.

I don’t even know where to start I am speechless. What a fast pace action pack suspenseful thrilling chilling read. If you have any doubt how Ms. Fenech became a USA Today bestselling author just pick up this book you will have no doubts after the read. This is one author that has no trouble taking you to the edge again and again as she holds your attention you fall in love with the characters and become so invested in this story you won’t be able to put it down. Serial killers have always been my thing but I am not sure I have read any true crime that is as suspenseful making you hold your breath as you feel the pain of the victims. It won’t take you long when reading you will be saying oh my, oh no, oh please, OMG as you close your eyes and take a deep breath waiting to see what the author has in store for you.

A mad man is on the loose kidnapping women so he can play his game. The stakes in this game just rose as the serial killer takes a major step to get his just deserves desserts. It all started with finding a body and then another and still another for special agent Paige Carson to want to bring this killer to justices. One mistake has her running for her life with the killer one step behind her or is he two steps ahead. Paige use to be a sassy little thing seeking to make a name for herself in her career in the FBI. One night changed all that when she met the killer who she thought would be behind bars for a long time to come. Even behind bars he had a long reach now with him out she is in his sites for a game of hide and seek or is it tag you are it.

The narration was outstanding I am unsure which I like the best the audio or the book. Christina Traister with her many different character voices add so much to this audio. The voices, tones and emotion this narrator gives fit the characters so well. You can feel the pain, sorrow, anger, excitement, fear as each character takes over giving you a listen you won’t be able to put down. I found I was finding things to do around the home so I could listen. Even though I have read the book and loved it I found I had missed things that the audio brought to life. I did feel Sam’s voice was a little flat to my liking. He really didn’t get excited and show much emotion for the most apart until something happened that put not only his loves ones but Paige at risk. I still feel this is a 5 star listen and one you won’t want to miss. There are not any places where the volume is higher or lower, if breaks were taken you could not tell it. The narration gives an easy, exciting listen that will keep you on the edge of your seat ready to fall off as someone plays this cat and mouse game with people lives. Ms. Traister has wonderful voices you have no trouble knowing who is talking and what they are feeling. Her male and female voices are wonderful, I just adore her child voices and the excitement she brings to them. Ms. Traister had me holding my breath one minute and smiling the next as she puts herself out brings you a highly entertaining listen. I truly didn’t want this story to end.

Paige has learnt her lesson she overstep the line once but never again. All she wants is to raise her little sister and work on her career in the FBI. At every turn Todd is there reminding her that he is watching. She moves her family one last time to a nice quite town in South Carolina. Things aren’t going to bad until the senator’s sister is murdered leaving a calling card for Paige. Now she has to prove he did it and find all the bodies he left behind so they can find peace and their families can have closure. This isn’t going to be easy since no one but she understands what the postcard means. He is back and is coming for her to play a new game of lose, pain and death. I really liked Paige she might have been a tough cookie at one time but now she is just holding her own. I felt for her as my heart went out wanting so much to grab her right out of the pages.

Sam is still dealing with a divorce and trying to be the best father for his son. Paige comes in taking his breath away. He knows she is hiding something wondering if she can be trusted when push comes to shove will she stand her ground protecting her unit or will she break leaving them wide open. Sam is a character you would love to take home to mom he is kind, caring and giving. Being handsome hunk doesn’t hurt either. As he spends more time with Paige he is sure she is hiding something and starts to pull her out of her shell. With it comes down to it he will protect her at all cost.

These two have some powerful chemistry which leads to some very heated scenes as the author take you on a ride that will shock and amaze you at the same time. You have wonderful characters with everyday lives making this a very believable read. I promise by the time you turn the last page you will be saying WOW JUST WOW as the author spins one tale after another twisting her way through a very powerful story you won’t forget anytime soon. It is going to be a while before I forget this read or this author. This was an exciting edge of the seat read with the correct balance of romance to make this one of my favorite read of the year. The author reveal all in perfect timing just to add to the depth of excitement to enhance the read. You are pulled in from the first page until the last never knowing just what twist will play out in this chilling, thrilling action packed read which will have you begging for more from this very talented author. Both the book and audio gives the reader/listener so much. I am unable to decide which I like more. I highly recommend this book or audio even both it is a story you won’t want to miss with a great balance to keep you heart beating faster holding on for dear life as the author gives you a read that will touch you all the way to your soul.

For the most part the voice performance was good, but her portrayal of the main male character made him sound pretty bad and it was to the point of distraction. Book was really good from a thrilling perspective though!

This book was so good. I really enjoyed every bit of it. I could almost feel all that Paige was going through.

I purchased this audiobook by mistake

Taken only as a suspense thriller this novel deserves four stars. It is quite good.

great listen starts slow for only a little while, but man does it pick up! 5 stars

Loved the book and the suspense in the story line. enjoyed it very much and would recommend

I enjoyed the storyline. Romantic scenes were a bit racy but tasteful. No vulgarity, which I appreciated!

Yes, I thought the story held my attention and the narrator had me feeling things as they happened.

I loved when Paige is in danger and Sam is trying to find her.

What does Christina Traister bring to the story that you wouldn’t experience if you just read the book?

There were scenes at the end of the book and the way they were read had me groaning out loud. I could feel the pain and terror that the character was going through.

Yes, when Paige was fighting for her life.

This was such a great story. I thought the narrator did a great job with the story. I would have loved to have heard Sam's voice, too, but it was well done the way it was.

A story for many.

This story ticked so many boxes, not sure how to classify. Thriller, suspense, romance, intrigue, steamy, soul wrenching.