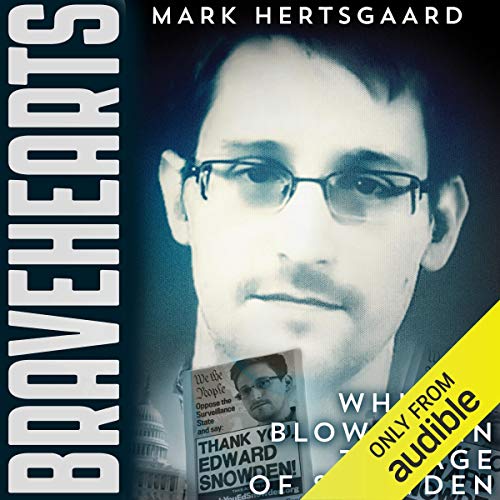 Whistle-Blowing in the Age of Snowden
By: Mark Hertsgaard
Narrated by: Reid Armbruster
Length: 5 hrs and 3 mins
Categories: Biographies & Memoirs, True Crime
5 out of 5 stars 5.0 (2 ratings)

Whistleblowers pay with their lives to save ours. When insiders like former NSA analyst Edward Snowden, ex-FBI agent Coleen Rowley, or Big Tobacco truth-teller Jeffrey Wigand blow the whistle on high-level lying, lawbreaking or other wrongdoing - whether it's government spying, corporate murder, or scientific scandal - the public benefits enormously. Wars are ended, deadly products are taken off the market, white-collar criminals are sent to jail. The whistleblowers themselves, however, generally end up ruined. Nearly all of them lose their jobs - and in many cases their marriages and their health - as they refuse to back down in the face of increasingly ferocious official retaliation. That moral stubbornness despite terrible personal cost is the defining DNA of whistleblowers. The public owes them more than we know.

In Bravehearts, Hertsgaard tells the gripping, sometimes darkly comic and ultimately inspiring stories of the unsung heroes of our time. A deeply reported, impassioned polemic, Bravehearts is a book for citizens everywhere - especially students, teachers, activists and anyone who wants to make a difference in the world around them.

What listeners say about Bravehearts

Good stories and some fuzzy thinking

The stories and opinions about Ed Snowden etc was interesting, but I despised his gloating about shutting down a nuclear power project and then complains about anthropogenic global warming destroying the planet, which no science supports.. He forgets we need base power to back-up unreliable renewables, and nukes make excellent base power with zero carbon emissions. So I marked the author down for fuzzy thinking.

Without whistle blowers we'll never know what wrongs our government and corporations are up to.

WOW, I am speechless. Amazing Book, A MUST TO DO!

Would you consider the audio edition of Bravehearts to be better than the print version?

Yes, this book is beautifully read by the speaker.

What other book might you compare Bravehearts to and why?

I don't know, haven't come across similar information or story.

What does Reid Armbruster bring to the story that you wouldn’t experience if you just read the book?

Reid did an excellent work by using different tones of voice and acting the story which delivers lots of information to keep the listener trapped. His voice is clear and fun to listen.

I downloaded the book yesterday at 9:30 am and I started to listen and could not stop to do so. I finished the book and I am planning to listen this book again and recommend it to a few friends.

Some books I have heard in the past the voice of the reader is boring and makes me halt. Should use more often voices like the reader of this book which is easy, light and fun to listen.