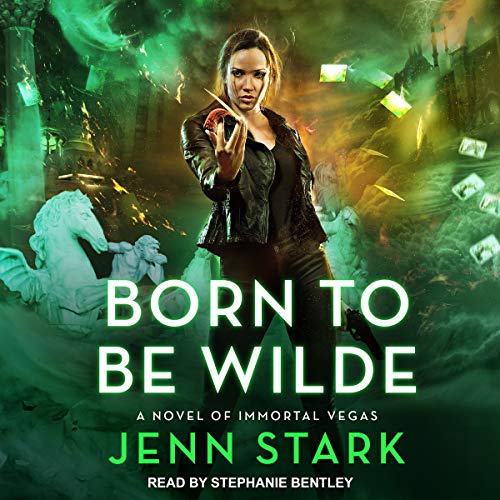 Born to Be Wilde

By: Jenn Stark
Narrated by: Stephanie Bentley
Try for £0.00

The past has a way of catching up with you.

If there's one thing tarot-reading magical-artifacts-hunter Sara Wilde has never been able to track down, it's the truth about her own past. But now a powerful new threat to the psychic community will take Sara back to where it all began: the last job she worked with Officer Brody Rooks as "Psychic Teen Sariah", the job that destroyed her life and sent her on the run. Because the enemy she fled all those years ago has returned...with a posse of demons as his personal entourage.

Worse, Sara's infuriating mentor, the dangerously seductive Magician, is pushing her to stretch her abilities and explore the very deepest reaches of her magic. But every demand draws her further into the spell he's weaving around her. And every challenge tests her vow to keep him at arm's length.

From the glittering chaos of Las Vegas to the lost city of Atlantis, Sara must risk everything in a quest for vengeance that grows darker and more twisted with every step. To succeed, she'll have to face the truth about her past, her abilities...and the impossible, unstoppable attraction she has to the Magician. A truth that will reveal her ultimate role in the war on magic.

Life is full of surprises when you are born to be Wilde.

What listeners say about Born to Be Wilde

What a very good book no series it's a great series. Lots of suspense, action, romance, magic and more. Characters you want to know. A new adventure in each book and New insight to each character. A very well written book. As far as narrators go MS Bentley is wonderful a gifted story teller. Each character has there own unique voive and it's told with emotion. I am a bit sad we only get 4 books that come in audio why I love audio book especially when you get such a good narrator and author that writes a really good book.

I give up on this series. I am almost finished and I still have no idea what is going on. I think this author is trying to write these books as a tv show or movie because it skips a lot. Kind of like going on commercials. It’s literally a whole lot of nothing with a ending. I have no clue why the big bad immortal magician likes Wilde because she is a childish fool that always asks RIGHT? Right??? After everything. Also the authors insistent use of the work too is ridiculous. By the third chapter she used it 14 times. I mean really how much can something be “too close, too hot” or “too much, so much” I mean come on. I give up on this series and seeing how the love interests grow. It’s completely unreal to me. Nobody would like a child when they are supposedly 20,000 years old. No matter how “bored” they can be.