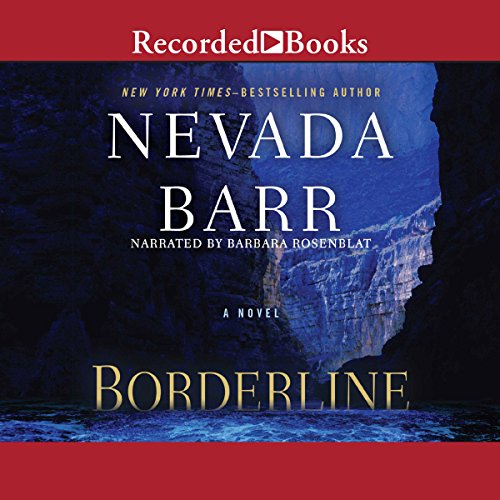 By: Nevada Barr
Narrated by: Barbara Rosenblat
Try for £0.00

The killings on Isle Royale have left Anna drained and haunted, her memories of her time with the wolf study group forever marred by the carnage on the island. Diagnosed with post-traumatic stress disorder, she is on administrative leave, per her superintendent's urging. Anna wonders if the leave might not be permanent, either by her own choice or that of the National Park Service.

The one bright spot in Anna's life is Paul, her husband of less than a year. Hoping the warmth and the adventure of a raft trip in Big Bend National Park will lift her spirits, Paul takes Anna to southwest Texas, where the sun is hot and the Rio Grande is running high.

The sheer beauty of the Chihuahuan Desert and the power of the river work their magic-until the raft is lost in the rapids and a young college student falls overboard, resulting in an even more grisly discovery. Caught in a strainer between two boulders and more dead than alive, is a pregnant woman, hair and arms tangled in the downed branches. Instead of the soul-soothing experience they'd longed for, Anna and Paul find themselves sucked into a labyrinth of intrigue that leads from the Mexican desert to the steps of the governor's Mansion in Austin, Texas.

What listeners say about Borderline

How Anna survives all the torture her creator puts her through is miraculous. That aside, another great story - I listen to them all as read by the best, Barbara Rosenblat.
One Flaw - reference to a John Deere Caterpillar is like calling a car a Honda Ford.

Nevada Barr is much more than a very good "crime "genre novelist; she is one of the finest local colorists and imaginative-ly perceptive novelists in our literature. Her vivid descriptions of the national parks which are the settings of her novels and the very interesting psychological developmen of her her brilliantly conceived heroine Ranger Ann Pigeon make this among thle best of the series.

Too Much of a Good Thing

I was thrilled to see a new Anna Pigeon novel on audible.com, so I immediately downloaded "Borderline". But after about half of Part 1 I am disappointed.

Usually the author mixes in good character development, history, and introspection with all the high danger scenes but this novel is way too heavy on the action/adventure stuff. The back-to-back descriptions of each micro-move are tedious and unnecessary, over the top, and just not believable for someone on medical leave for PTSD and I had to fast-forward through many of them.

Additionally the characters with whom Anna and her husband Paul share the rafting trip seem flat and uninteresting - but this group was their choice. They would have done better, and so would the novel, if they had gone with the "green and grey" group that would have had a little life history and experience to offer. This group just seemed adolescent and monochromatic.

I did like the switchback scenes to the local Texas political scene and thought that was handled well.

The scenes with Anna's shrink were the most interesting, and I also missed the telephone calls to Anna's shrink sister, Molly, that populated Barr's earlier novels.

I will give this one another chance, but in general I'd say give it a pass.

Anna gets her groove back!

This was a really good follow up to the previous book. It was good to have Anna's husband in the mix more than usual. This one kept me guessing for a little while, but no matter. I love listening to Anna in a tight spot! I would have liked to hear her sister's take on Anna's mental state. I guess we don't share everything with family. Barbara Rosenblatt is a gifted narrator. I could listen to her read the phone book...

although a great writer, the story was poorly developed and even worse researched. not worth the discount rate i wasted to listen to it... in fact if I had just used my credit i wouldnt have even taken the time to finish it...it was that bad.!!!

I looked forward to the new Nevada Barr for a long time and have been very disappointed. It's not that I could see the ending coming; I couldn't. But by the time it arrived, I really didn't care and I found it to be just too contrived. I got an inkling of the disappointment to come when listening through what seemed like at least an hour of a painstakingly detailed rescue of a starving cow by some rafters from a cliff along the rio grande. It was filler that seemed neverending. Add that to the politically correct preaching that was sprinkled liberally throughout and I really cannot recommend it.

I've either read or listened to all Barr's 'Anna Pigeon' books and have loved them all, to varying degrees. All are good, some are better than others.

This one is one of the very best -- not only is poor Anna (who's no spring chicken anymore, remember) performing totally superwoman acts of physical derring-do, but she's also finding herself oddly attracted to a newborn baby, one she delivered by c-section with a pocket knife, by the way. It's an interesting contrast -- and also leads to some of the funniest banter among characters that appears in any of the books.

Another thing I appreciated was that in Borderline -- unlike some of Barr's other books -- there wasn't a lot of animal bloodshed in this one. I don't deal easily with animal suffering, even of the fictional variety, and this book -- thank goodness -- keeps the evil pretty much confined to the human species where it belongs. (Well, okay, Easter -- but I won't spoil the plot)

Great book! Not to be missed -- and the marvelous Barbara Rosenblat is at her best, too. I'd give it seven stars if I could.

Barr has lost it

There were two reasons I used to love reading Barr's Anna Pigeon books: the protagonist was a strong, independent female, making it on her own; the national parks were characters in the narratives, and the books were filled with carefully rendered details that made each park come to life in their unique ecologies. In this book, Barr has truly and finally given up what make her Anna Pigeon books special. Anna is the helpless, dependent female who has become a passive participant in events, just drifting from one situation to the next clinging to her "adopted" baby like some kind of security blanket; she saves the baby, but she does nothing at all to solve the crimes. Big Bend park is similarly just a passive backdrop for the opening events. Blah.

All over the place

This was another impulse book, reviews good but dragged for to long. But....then the author introduce a character to the plot that you never expect to have any role in the story. So worth it, spend the time and you will enjoy it.

As a fan of Nevada Barr's, I was not disappointed.
Good story line, beautiful scenic descriptions.
A little too convoluted at times and bordered on hokey with respect to the cow rescue..