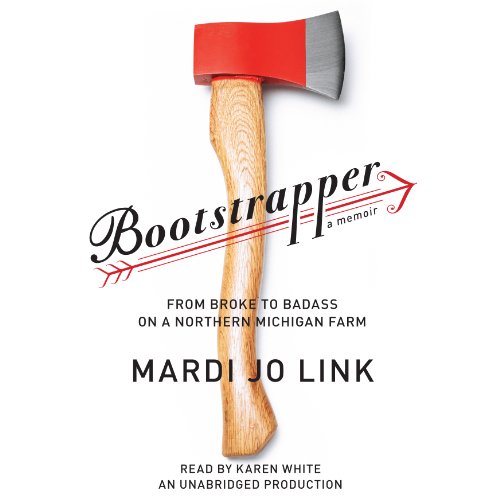 Poignant, irreverent, and hilarious: a memoir about survival and self-discovery, by an indomitable woman who never loses sight of what matters most.

It’s the summer of 2005, and Mardi Jo Link’s dream of living the simple life has unraveled into debt, heartbreak, and perpetually ragged cuticles. She and her husband of nineteen years have just called it quits, leaving her with serious cash-flow problems and a looming divorce. More broke than ever, Link makes a seemingly impossible resolution: to hang on to her century-old farmhouse in northern Michigan and continue to raise her three boys on well water and wood chopping and dirt. Armed with an unfailing sense of humor and three resolute accomplices, Link confronts blizzards and foxes, learns about Zen divorce and the best way to butcher a hog, dominates a zucchini-growing contest and wins a year’s supply of local bread, masters the art of bargain cooking, wrangles rampaging poultry, and withstands any blow to her pride in order to preserve the life she wants.

With an infectious optimism that would put Rebecca of Sunnybrook Farm to shame and a deep appreciation of the natural world, Link tells the story of how, over the course of one long year, she holds on to her sons, saves the farm from foreclosure, and finds her way back to a life of richness and meaning on the land she loves.

What listeners say about Bootstrapper

great story about a mom who will fight for her fam

Would you consider the audio edition of Bootstrapper to be better than the print version?

more women like this and America would be back on track

The memoir of a whining twit.

What would have made Bootstrapper better?

A bonfire on which the original manuscript was placed? The book was terrible. It's rare that a book get's under my skin this way- but two months after listening to it, I'm still annoyed.

Has Bootstrapper turned you off from other books in this genre?

Not at all. But it has turned me off to reading anything by Mardi- Jo Link, or listening to anything narrated by Karen White.

I think it is possible I would have disliked Mardi Jo less if the portrayal of her had been different. Less tentative and resigned. Less self-congrautlaing and stoic.

Nope. Not one. I am rarely this hard on a production of any kind- but this was a waste of time.

First off- Physics 101 will tell you that because every force has an equal and opposite force, pulling yourself up "by your bootstraps" is a physical impossibility.

Second- there are people out there who defy the laws of gravity and do this everyday- pushing forward against real odds, with humility and grace. This book is an insult to those people. This woman is a educated, landed, employed, human whose pride got in the way of her best judgement, and her ability to keep her children warm and fed. I found myself thinking again and again, "What an idiot!"

The real kicker- the happy ending- is that a man comes along to save her. How 19th century..... So much for her own bootstraps. What a joke!

This book was one I couldn't put down!!

Someone recommended this to me. I'm so glad that they did!! Awesome! The narrator was easy to listen to. This woman is truly a Badass!!

This was my first audible book. I thoroughly enjoyed it. I will probably listen to another of Mardi Jo's books.

Don’t waste your money. This book has a terrible story. All the author does is whine about her life. The narrator for the audio book is hard to listen to

What made the experience of listening to Bootstrapper the most enjoyable?

I just enjoyed how she turned a horrible time into an amazing one, she kept her head held high and did the best she could do.

The thing that annoyed me the most was that she bought meat chickens and didn't butcher them she just gave them away. She is on a farm there is always going to be death as well as life. I get 50+ meat birds (turkeys and meat chickens) every year and dispatch them myself because i do it humanly not send them off to some dirty slaughter house.

I liked when she finally got together with Peter

entertaining at times but best way to describe it is "eh" . Takes place in a place I know well so wanted to like it. oh well.

If you could sum up Bootstrapper in three words, what would they be?

Mardi. Seeing the humor during a most difficult season of her life.

Which character – as performed by Karen White – was your favorite?

Mardi. Made me smile, grin and giggle.

Would you consider the audio edition of Bootstrapper to be better than the print version?

Yes, as Karen White knows how to read a good book & give the right tempo and inflection to words= funny as the author meant it to be.

The whole story had so many. I Loved the three boys, their attitude and style. They steal the book.
"I want meat".
The pillow case for the zucchini. I purchased this book as I wanted a book that had humor and included how to survive, use different thinking and overcome one's surroundings. This is the author's memoirs of her wants and desires retold with humor. I got exactly what I was looking for. Yes, this has heartache and more trials than most could or would endure. But when a story is retold with humor, it is uplifting.

Have you listened to any of Karen White’s other performances before? How does this one compare?

I love Karen White when humor is in the description of the book. Humor is what she knows how to read so very well. see Julie James series. Ms White has the best man voice along with Natalie Ross and Gabra Zackman. The late great Anna Fields remains the best.

yes, as you want to know the ending. The valor the 3 sons have in standing by their mother is so wonderful...you could just eat them up. The view point on each new adventure/hardship is so different from each son. Karen White voice for them just brings them so very much alive. I did tear up when the zucchini contest was described. It was just so cute!

I am looking for other reviewers who like humor and the books they have chosen.
Way too many FSOG type material, which I too have down loaded, but they do not lift your spirits up.

Would you listen to Bootstrapper again? Why?

A delightful memoir! Both heartwarming and funny, her story had you rooting for her and her wonderful boys from the very beginning. I knew I loved her when she said the only things that scared her were big hairy spiders and chainsaws…so true. I hope the author receives all the success and happiness she so richly deserves.