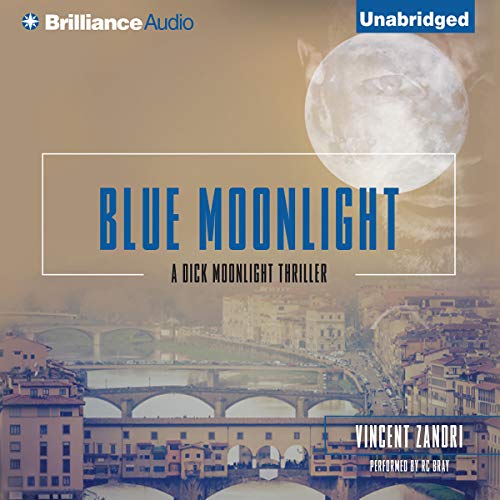 PI Dick Moonlight wakes up to find himself on a plummeting plane and handcuffed to an FBI agent. As if his life wasn’t already turbulent enough - his bar burned down; his ex, Lola, left him for another man; and Jack Daniels is his new best friend - the FBI informs him that he’s got unfinished business. His last case, the one with Russian mobsters after a top secret flash drive, isn’t exactly closed.

The cop who took the hardware from Moonlight went rogue, bringing along a crooked FBI agent and Moonlight’s ex, and now he’s looking to sell to the highest bidder. The FBI needs Moonlight to track them down - in Florence, Italy. Outwitting, outrunning, and outshooting the Russian thugs who are also after the flash drive will be a piece of cake. Wooing back Lola, however, is going to take everything he’s got.

What listeners say about Blue Moonlight

Another brilliant book - a must listen

I think the moonlight series is brilliant and the story is brought to life by Mr RC Bray and his excellent narration. Moonlights' sarcastic personality and hence dialogue is perfect, setting the tone for another rollercoaster thriller. The story has numerous twists and turns and it kept me coming back for more. The dialogue and RC Brays voices for those pesky Russians is hilarious along with the voice he puts on for Zumbo - adding further humour to this great thriller. A must listen!!