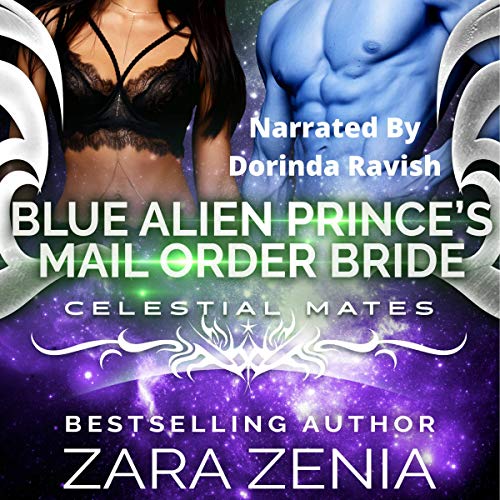 By: Zara Zenia
Narrated by: Dorinda Ravish
Try for £0.00

A powerful leader needs a strong woman by his side - but would a human be strong enough to bear the burden of love and leadership he was offering?

Larzukan, leader of the Tharagan race, was in need of a bride, but when faced with a choice between two females from his planet, he found that he wanted something more. Not just a mate, but a creature who could rule alongside him. In an act of desperation, Larzukan applied for a mail-order bride, hoping that his call for a mate would be answered by a female from another planet.

Felicity was at the end of her rope. A marriage she had never agreed to had been arranged by her father, and she wanted nothing to do with it. The only way out is an arrangement of another kind, a reply to her application to be a mail-order bride. What she doesn’t know is that her intended groom is an alien, and she’s going to be transported hundreds of thousands of miles away from the only home she’s ever known.

Marriage isn’t easy, but it’s even harder for Felicity to come to terms with the fact that Larzukan has given one of his former suitors the task of caring for her. Suspicion and doubt cloud Felicity’s mind, but will Larzukan’s love be enough to convince her that she is worthy to stand at his side and lead his people?

Blue Alien Prince’s Mail-Order Bride is part of the Royally Blue - Celestial Mates series and is a full-length science fiction romance novel. There are no cliffhangers, no cheating, and a guaranteed happy ending!