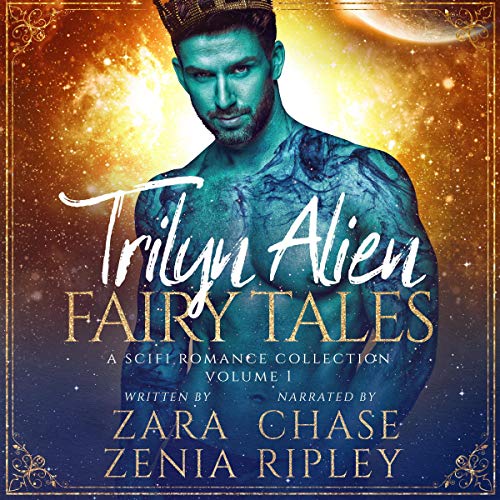 By: Zara Zenia
Narrated by: Chase Ripley
Try for £0.00

Once upon a time, the Trilyn made contact with the people of Earth. In return for taking seven fertile females as brides for their seven princes, they would share their alien technology and enable Earth to create intergalactic spaceships.

Prince Gardax, the eldest of the seven princes, has endured years of searching for the human female who can bear his children. Two years of parties, genetic compatibility scanners, and failed attempts at finding the one woman who was meant for him.

Amy Allan was just looking for a job, anything to ensure the survival of herself and her baby sister. Working in the great palace of the eldest Trilyn prince seemed like a good idea at the time and the only option available for a war-refugee with a toddler in tow. But with a backbreaking workload and a nightmare boss, hoping for something better seems futile.

When the devastatingly handsome alien prince bursts into the kitchens demanding his mate, Amy’s last shred of hope disappears as her domineering boss, Darla, steps in to claim the prince for herself. Darla will stop at nothing to become a princess, even if it means threatening Amy and her sister. Can Amy defeat her nemesis and win the prince’s heart? Or will she lose everything she’s fought so hard to keep?

There’s nothing romantic about choosing your mate with the help of technology, and for Prince Darbnix, there’s nothing he’s less interested in than using a scanner to find his true love, but he’s also tired of fighting with his older brother about them. A human plot almost tricked the eldest Trilyn prince into marrying the wrong woman, but Darbnix has other plans. He’ll go through the motions of the grand parties to please his brother, but his heart won’t be in it.

When the pact between the Trilyn and Earth was solidified, Dr. Rose Rand decided that the future of her veterinary career lay in exo-livestock, the care and healing of alien creatures fascinated her. But when she was called upon to examine a royal pet, she never imagined that she would be falling in love with a Trilyn prince intent on giving up his search for a compatible bride.

When Prince Darbnix’s match is found in a Southern beauty queen, someone he never would have chosen for his bride, his suspicions flare. Can he and Rose discover the truth behind the manipulation of the compatibility scanners and reach their own happily ever after? Or will Darbnix have to turn aside his love for Rose and follow his brother’s command?

Beauty and the Alien Beast

Prince Manzar has struggled through four years of banal social events, socializing in hopes of finding his mate. His dark, brooding temperament and unhuman appearance have made it even more difficult for him. When a political dissident seeks refuge in Manzar’s palace and brings along his daughter, Andi, Manzar never anticipates she will fill the void in his life and offer him a way to continue his species.

Andi LaBelle struggles against her near-captivity at Prince Manzar’s palace. She doesn’t appreciate being confined or the controlling, gruff nature of the handsome Trilyn keeping her and her father safe.

When the dissidents attack and their lives depend on Prince Manzar’s ability to protect them, Andi realizes the alien’s gruff, militaristic nature that has scared her away is precisely what she craves and needs.

What a disappointment. Listened to first story but struggled to get through to the end , I will not finish any more,

Probably one of the worst fairytale rewrites I’ve ever read/listened to. The theme had a lot of potential but it certainly did not live up to my expectations. I found the writing to cringie and the characters to wishy washy, especially the girl in the beauty and the beast rewrite.
Sadly the story was not helped by the choice of narrators. I found the voices to be grating. However I did enjoy that they were dual narrated.

narrator was ok
story was good. follow up books should of had the wives from the other books involved in some way especially book 2 because book 2 was almost identical to book one. Amy should have come to Rose's rescue.