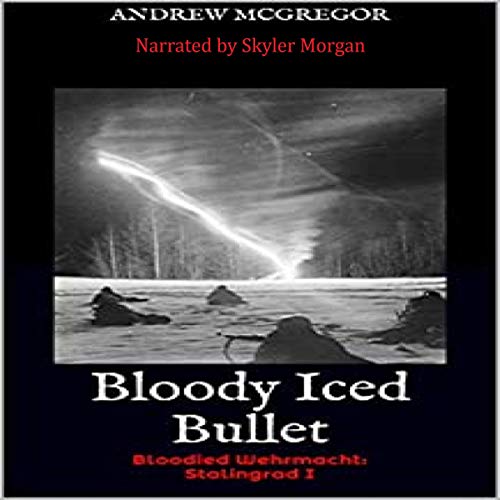 By: Andrew McGregor
Narrated by: Skyler Morgan
Try for £0.00

November 1942 on the banks of the River Volga. The German Army advance into the Caucasus Mountains in search of the Russian oilfields has halted for the winter as the bitter fighting in Stalingrad takes center stage.

The German Air Force, the Luftwaffe, has virtually driven the Red Air Force from the skies.

The Germans, confident in taking the city that holds Stalin's namesake, strip their flanks of troops to bolster their forces fighting inside the city. For just one last push to decide the battle and the outcome of the war.

To the south of Stalingrad, on a thinly held front line stretching hundreds of miles, small groups of German troops are dispersed across positions held by their allies of the Fourth Romanian Army.

As winter approaches and temperatures drop, the soldiers bed down in their positions, consoled by the thought that they will not have to fight through another Russian Winter in the bitter sub-zero temperatures. Temperatures that the Russian Army is more than accustomed to.

Press releases advise the front line troops of the impending collapse of the Russian Army and state. The drive to the banks of the Volga had produced few prisoners and seen most Red Army units retreat before the mighty and victorious German Sixth Army.

Really detailed and realistic. I felt like I was experiences the trials of war throughout this adventure. The narrator kept me engaged and committed to the story through painting a picture of emotions. Cannot wait to see where this series takes me.

Andrew McGregor paints a pretty terrifying picture as the German forces advanced upon the Volga River determined to access the river and reach valuable resources within Russia. The intricate details McGregor writes, builds excitement and suspense in this fictional telling and makes you feel like you were there alongside the German and Romanian troops suffering in the bitter cold and fighting the inferior but tenacious Russian army.

This war drama audiobook is narrated by Skyler Morgan clocks in at over 11 hours, Skyler has a subdued way of narrating that to me fits nicely with war/military genre. The one criticism I have is with the pacing, it’s a bit slow but I feel it has more to do with editing than with Skyler’s narrating. Overall, I riveted by the storytelling and it’s a stark reminder that war is hell!

This book was gifted to me exchange for an unbiased review!

If you have more than a 9th-grade education, skip it. The monosyllabic, completely unimaginative writing fails to deliver a compelling or engaging story. Very difficult to visualize as there is a dearth of descriptive phrasing. There were dozens of timed when she or grin crossed the lips of the forgettable characters...in the midst of miserable conditions. Simply put, this is poorly written at best.

A great look at history through the soldiers eyes!

What did you love best about Bloody Iced Bullet?

I loved how the story follows historically accurate information. It provides a factual historic base with a unique fictional storyline.

I like how the story follows multiple dynamic characters through their struggles and the bitterness of the never-ending cold mother nature can provide!

Which character – as performed by Skyler Morgan – was your favorite?

Hausser was my favorite character. A bold, strong and balanced leader who is faced with multiple tough scenarios. He shows a dedicated level of loyalty needed to get the group of men through frozen hell and back.

This book opened a range of characters I would like to see grow. I will buy the next book in this series!

Every story has occasional lulls here and there but with this book you almost need them to recoup from intense action scenes. The narration was clear and engaging and was able to keep my attention without being overly dramatic. Solid 4 stars.

Narrator doesn’t know some of the military stuff but does okay.

This is an interesting book. Writing is a simple. As in not very “dressed up”, as if a normal person wrote down a story they were telling. That’s not a bad thing per se, but I know it will annoy some listeners. I bought this trilogy on Kindle because I liked it and started listening to it. It’s a decent buy. Don’t know how I would feel paying full price but if your a war but it’s a good human story about the breakout of Stalingrad.

I wanted it to be good

The writing seems to me to be amateurish. The reader.... is like a drowning engine. It was a struggle to complete the book. I so wanted this to be good because I’d love a good novel on this period, but this isn’t it. I won’t be getting the rest of the series.

Great book thats puts you in stangrad. th err e are really none l i ke this.

Get the soldiers perspective. Gives you front row seats to parts of the most epic battle ever. This is where the war was really won. T he european. War at least. H we may not be able to praise t he russian leaders but we should applaud the men a d women and even c children who survived to fight again. Must l I s ten f or anyone who is interested in the eastern front.