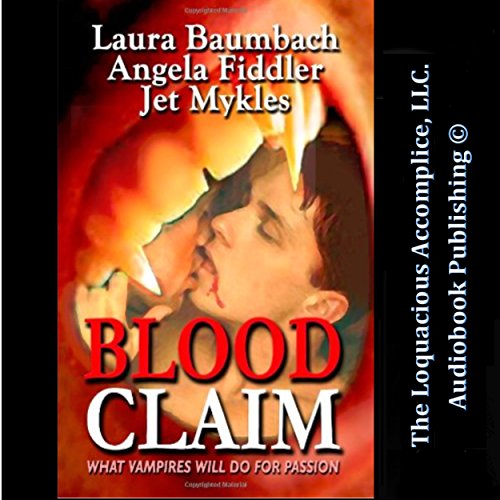 "Winner Takes All" by Laura Baumbach - Two vampires face off in a deadly bet that has the winner claiming everything the loser owns - including the loser's innocent, unaware human offspring. "Gift of the Raven" by Angela Fiddler - Cory has always been mercurial; passionate one second and frozen the next, but when he was hot, he was scorching. Luke had brought him up as a vampire but couldn't keep him the first time around. But now evil's come on an arctic wind, and they'll need each other to fight it. "Wolfe's Recluse" by Jet Mykles - Can Wolfe lure Matt out of his apartment for the first time in two years? Is the gorgeous Wolfe temptation enough for Matt to overcome his fear of vampires?

What listeners say about Blood Claim

Usually, anthologies like this from multiple authors are difficult to review, because there are some stories I like and some I don't. I was already familiar with Jet Mykles (Heaven Sent) and Laura Baumbach (Details of the Hunt), so I expected it to be great. I wasn't disappointed. I actually really liked all three stories.

Although I didn't fall in love with any of the characters, it was a nice, easy read. Each story was unique and well-told. I really liked that it wasn't the same cliche vampire story. I will definitely be looking forward to more from these three authors.

I thought Holden Madagame sounded a little young for the opening scene, but after a few minutes, I really liked his narration. I didn't hear any mistakes or weird voices and I could tell the characters apart, which is usually all I can ask for. Overall, I thought he was a good match for the book and I would be happy to listen to more books by him.

Where does Blood Claim rank among all the audiobooks you’ve listened to so far?

The story was well constructed and kept my interest. The sex scenes added just the right amount of spice without dominated the plot.

What was one of the most memorable moments of Blood Claim?

Each and every chapter held special moments, so much so that defining a specific one would be nigh impossible.

I very much enjoyed the sex scenes as they were natural and flowing. Each scene was it's own and not the typical re-hashing of the previous.

Following along with Malcolm through this journey was wonderful.

I adore the firts story on this audible

What made the experience of listening to Blood Claim the most enjoyable?

The story is so sexy hot

What other book might you compare Blood Claim to and why?

Which character – as performed by Holden Madagame – was your favorite?

They all were great

It made me swooned.

Loved the firts story it was sexy and mysterious

You Need Oven Mitts to Hold These Stories

Blood Claim is a sizzling anthology of three vampire love stories. I didn't realize when I got it that is was M-M but the stories are still smoking.

Winner Takes All by Laura Baumbach introduces us to sexy, brutal Malcolm and his soon to be dead ex-lover William Prey. William's dying request to Malcolm is to not kill William's human child. This of course sparks Malcolm's interest.

Wolfe's Recluse by Jet Mykles is my favorite. Take geeky, recluse Matthew who witnessed the death of his lover at the fangs of a vampire. Add in Matt's sexy voiced boss Wolfe and let the healing and steam begin.

Gift of the Raven by Angela Fiddler is the story of Corbin & Luke. Corbin has a dark secret that he wants to protect Luke from.

Holden Madagame brings the stories to life for the listener. Nicely done!

This audiobook was provided at no cost in exchange for an unbiased review courtesy of Audiobook Blast.

Three stories of old vampires and of the young ones they turn for love.
Winner Takes All by Laura Baumbach: Malcom Crane is a celtic warrior turned vampire more than a thousand years ago. He is in love with William Pray, but the newly made vampire is still mourning the loss of his beloved wife and has no other desire in life to see his son safe. But he looses a bet with Malcom and then Malcom kills him and since winner takes all, William's son, Hunter, is now in his power. Thinking to kill the son as he has killed the father he tracks down the young man only to find out that he is not the boy to be enthralled by the vampire but exactly the other way.