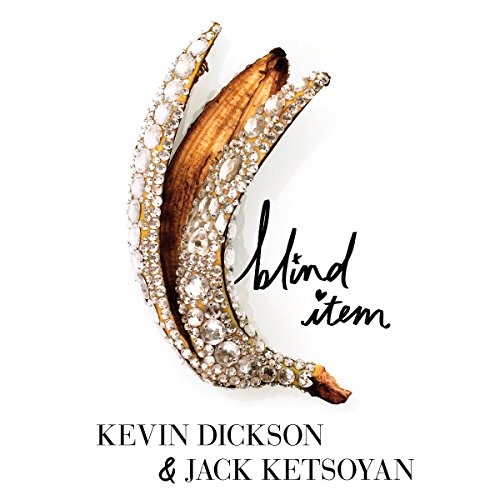 No one knows her name, but now everyone wants to.

As an assistant publicist in Hollywood, Nicola spends her days (and nights) sweeping up the scandals of singers, movie stars, and TV actors. Fresh from Ohio, she's rapidly discovering the real Hollywood is rotten under its glittering skin. Everyone is a hustler with a hard bottom line and a soap opera sob story.

When she breaks her own rules and starts dating a movie star, the Los Angeles scene starts to spill into her own life. As the paparazzi begin the hunt for sexy star Seamus O'Riordan's new mystery girl, Nicola's best friend Billy has her back while he prowls parties for the latest scoop to sell to the tabloids. Her roommate Kara keeps tabs on things too - in between befriending a former child star and transforming herself from stylist to reality TV sensation.

As the scandals pile up behind them, their pasts will be exposed...And every secret can be sold.

Written by two Hollywood insiders, Kevin Dickson and Jack Ketsoyan, Blind Item's jaw-dropping scandals are real, but the names are not. And they'll never tell.

"This book is as outrageous as any true life tabloid scandal - and is a must read!" (Jenny McCarthy, talk show host, actress and New York Times best-selling author of Belly Laughs)

What listeners say about Blind Item

The story follows a young woman as she peeks behind the Hollywood curtain and learns how the game is played. It has all the sheen, grime and sex of a tell-all Hollywood love story with some thinly veiled real life celebrity inspiration. My favorite parts are all of the supporting characters. The world of this book is detailed and surprising. The writing and performance for Gaynor, the high power take no prisoners publicist is so much fun! Highly recommend this book with one caveat, there is a bit of vocal fry throughout, although it is not gratuitous and very character appropriate.

Made my commute much more scandalous than normal! Nicola is endearing. Great fun to hear about the machine behind Hollywood!

slow beyond belief in the beginning. not e
believable enough to be real and not fantasy enough to be a get-a-way. just so so.

Perhaps it is unfair to write a review when I only managed to listen to the first 6 chapters..... I kept hoping that the writing would improve! Sadly I think it is shameful that TWO writers have so little vocabulary between them that they have to resort to the continual use of the word "fuck" as an adjective - serving no real purpose at all....

Thank you Audible.com for your return policy! I was hoping for something fun and light but definitely not this kind of novel!

For me it is back to the beautiful writing of Ruth Ozeki, Elena Ferrante, Patrick Flannery, Ann Patchett, even Julian Fellowes, Liane Moriarty, Scott Turow , Joanna Trollope, Belinda Bauer, Kate Morton, Barbara Vine but NEVER anything like this again.....

Honestly I was in South Beach at the Hotel Victor and 2 other women were reading the same book.

We all had on our big Gucci sunglasses enjoying this fun, funny, should be made into a movie book.

The characters are perfect, they are well developed and the story seems very real. Like this is what really goes on in Hollywood.

I have a cousin that works for E! News and that was confirmed. I just finished the sequel Guilty Pleasure and had to make sure I left a review that this is a must read. I am looking forward to more from these authors.

Good story be aware of...

This a good story but note that it does have some explicit parts (sex scenes & language.)

not great at all!

Couldn't finish this book, very dull. I wish I could get a refund. I tried to hang on a bit hoping it would get better but no luck.

DO NOT WASTE YOUR CREDITS

Would you try another book from Kevin Dickson and Jack Ketsoyan and/or Tara Sands?

I will never try another book narrated by Tara Sands. Her accents were so distractingly terrible that listening to this book actually made me mad.

Who would you have cast as narrator instead of Tara Sands?

My left foot or really any other person. She was that bad.

I'm not sure if the story was really that bad or if I was just distracted by the terrible narrating.

this book kept me engaged all the way to the end. beautiful and humorous story. very well written.