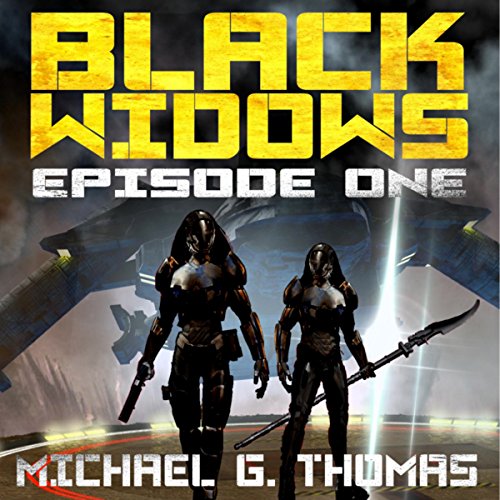 Black Widows is a thrilling science fiction series about the infamous all-female mercenary unit. Aboard their heavily-armed ship Medusa, they embark on secretive missions throughout the crumbling Confederacy as it wages a terrible and bloody civil war.

The lives of Syala and her twin sister Arana change forever on the day the slavers hit their new home on the Skylla Research Facility. It is a day that started like any other, before turning into a terrifying massacre as soldiers and hideous creatures swarm through the facility killing or enslaving anyone that stands in their way. The sisters struggle to survive as a desperate few try and fight back, but nothing can hold back the horde. Until they find a single mercenary dressed in black armor who refuses to back down. Her name is Zhang Wei, and she is a Black Widow.

Great Episode and I am looking for more.

I wasn't totally sure when I came into this one, so many shorts are just that, part of a larger piece, and I guess this is just that. It shows in the setup and execution. But it's not a bad thing. I think we get so used to having longer works that we forget the excitement of receiving something as part of a series... so kudos to both writer and narrator for taking this on. It's well worth the listen and the time to start investing in both narrator and characters.

Story wise, I do think that the all-female cast is really good. It's not over-done, it's refreshing because they're strong and they think. It's not all about the action.

Of course, I had my fav, and Nancy did a fantastic job of distinguishing between them all even though it was a very short just under 2 hours long.... it was worth investing in and I'm looking forward to more, and will happily follow this new series :) so thank you.

As the author of this review, I received a free copy of this audio, with no requirement to review or endorse. These are my honest thoughts on this story/narration.

This was a decent short story about a female group of mercenaries after a group of alien slavers attack. I really enjoyed this short story and listened to it straight through. It has lots of action, but the mercenary team often had to use their wits to solve a problem. I thought Nancy Peterson was a good narrator. She has good pacing and good range for her voices, even the male characters. I would recommend this to my friends. I received a copy of this audiobook for free in exchange for a fair and honest review.

STORY......
Good story so far. It kept my interest. I look forward to listen to more.

NARRATOR....
The narrator does a great job of bring life to the characters.

A good start to a new action Sci-Fi adventure

This short story is a good start to a new action Sci-Fi adventure. It was very easy to listen to this book in one sitting due to its short length. The action starts early on in the book and continues to the end, and I enjoyed every minute of it. I found the characters enjoyable and relatable, and I am especially excited to see what the author has planned for the sisters in the future. The narrator does a great job with the story. I was impressed with how well she voiced the accents and male voices, and I’d like to listen to more of her work. Overall, this book is a fun, quick sci-fi adventure and I look forward to listening to the next book in the series.

Love the plot, but not taken in.

Would you try another book from Michael G. Thomas and/or Nancy Peterson?

The plot and theme

What does Nancy Peterson bring to the story that you wouldn’t experience if you just read the book?

attitude, and a depth to the characters and plot that isn't always there.

Could you see Black Widows, Episode 1 being made into a movie or a TV series? Who should the stars be?

Not ep1 alone, but I could see a Tv series. Lucy Lu.

I have mixed feelings about this story, the plot is interesting, but the action is slow and at times hard to follow.

The two sisters are interesting, but the they can be more then a bit “slow and wet behind the ears.”. the Plot is slow to pick up but it is interesting over all.
I Received this book free for an unbiased review

Galactic Wars at the merc level

Well done. Galactic Wars told from the level of the merc on the ground. A small outpost over run an elite group of merc takes the stage. Good battle sequences. Great story. Just what I've come to expect from this author. Narrator does a very god job conveying the story and the feelings. I received this audiobook from the author narrator or publisher for free via audiobookboom in exchange for an unbiased review

Though a short story in most regards Black Widows is an action packed book that feels like a full size book broken up into bite sized pieces and like the saying you can't eat just one this book makes you want to hear more and learn more. while there is some basic background information that seems to be missing from the storyline none of it takes away from the story. I hope you enjoy this as much as I did.

I received the book free in return for a unbiased review and consideration. Thank you..

A good start to a new action Sci-Fi adventure

Which character – as performed by Nancy Peterson – was your favorite?

Yes. Very much enjoyed it

I enjoyed the story. I like the female leads. Zhang Wei takes on hordes of monsters, unwilling to give up when she's wounded or knocked on the ground. Her friends are just as motivated and fight to rescue them. Even the teen girls help fight and won't break down crying.

The narrator was ok. She gives emotion to her characters, but some of them sound similar.

It's unfortunate only the first two episodes are on audible and the last 4 are not.

Do you think they are females?

Out in space, on a rock of a research facility and out of nowhere they are attacked. Nice opening to what looks like is going to be a nice series. Strong, dominant characters and a goal of finding ones sister.

I can’t wait to find out what happens to these two twins. The quiet, peaceful, boring life two twins is turned upside down when their colony is attacked by deformed creatures with great strength. Rescued by an elite fighting group called the Black Widows, their adventure has just begun. Much like a pilot episode of a TV show, this book draws you in immediately. From the first moments of the book, you come to love the primary characters. The narration was excellent. Excellent job with the voices. Crisp, clean, and great accents. Overall: Wow!