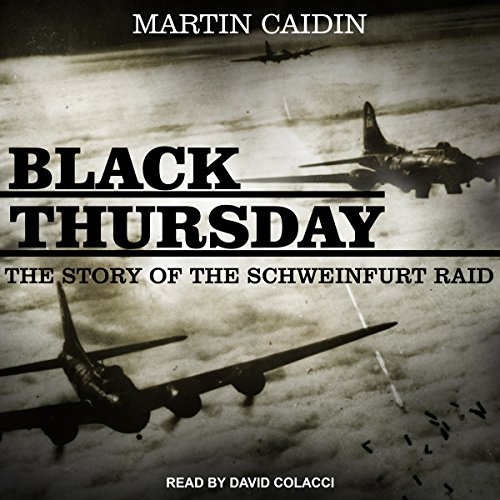 By: Martin Caidin
Narrated by: David Colacci
Try for £0.00

On Thursday, October 14, 1943, 291 B-17 Flying Fortresses set out for a strategic bombing raid on the factories in Schweinfurt.

Sixty of those planes never returned and 650 men were lost during the course of that mission.

It was the greatest failure that the United States Air Force had ever suffered and became known as "Black Thursday".

Martin Caidin's Black Thursday: The Story of the Schweinfurt Raid is a brilliant account of that day that should never be forgotten.

This audiobook uncovers in thrilling detail the build-up to that fateful raid as the ground crew prepare the aircraft and the aviators are briefed on their mission ahead.

By consulting with first-hand accounts and interviewing survivors Caidin's audiobook takes the listener to the heart of the action as the planes burst into battle in the skies above Western Europe.

What listeners say about Black Thursday

Captivating all the way through. Wonderfully narrated, I could not stop listening to it. Excellent

The Best Look at Bomb Groups of the 8th

Being the son of a radio operator in B-24s with the 467th Bomb Group (Heavy) stationed at Rackheath (http://www.montrealfood.com/mosecrew.html) in Kent, I naturally had more than a casual interest in this title.

Having heard and read many accounts about the notorious Schweinfurt attack (it's a misnomer to call something on this scale a "raid") I've never run across a detailed account of why things went so spectacularly badly on this one; I've only gotten through about a quarter way through this version but I'm compelled to review it nonetheless.

This is, without a doubt, the most gripping account of the inner workings of B-17 and B-24 operations that I've ever come across.

I must say, though, early on in the narrative (I guess I wasn't paying 100% attention) I suddenly realized that the narrator was describing a bombing raid on Schweinfurt, but running through it very quickly, from beginning to end, and I thought: "Wait a minute! He's giving it all away before the book has even started! How useless and annoying that he's basically just described the entire raid in just a few pages—what's he going to do, start again and then fill in the details?

I was greatly annoyed—it was like going to see a movie and then seeing an extremely detailed preview of the movie before the main feature.

I was about to start writing a letter to the editor (not really, but you know what I mean) when it gradually became clear that the raid that was being described had occurred the month BEFORE the infamous event that was the basis for the book.

That said, and once I'd gotten over my shock, I realized that the book was going to proceed even more in detail than I'd possibly hoped, sparing not the smallest details and describing even the most arcane aspects of the whole macrocosm surround that fateful day: the war, the combatants, the locations, the underlying reasons for the raid and so on, in the most gratifying detail that anyone, especially the son of one of the soon-to-be participants (in 1943 my father must have been in training at Wendover or Westover—I can never remember which—and was not due to fly his first mission until some months after D-Day).

The narrative begins long before the actual day but then zeroes in on the raid itself with microscopic and loving details—the layout of the cockpit of the B-17, the arming of the bombs, the profuse sweating of the fliers underneath all their leather bombing gear (my father used to tell me how he would sneak cigarettes by pulling aside his oxygen mask at 22,000 feet. This is the sort of detail included in this narrative, that is missing by so many other less enjoyable descriptions).

One thing that is striking about this book is that it was apparently written in 1959 or 1960, and one of the notable participants of the Schweinfurt raid who had contributed to the book was still serving in the Air Force at the time of writing, flying in B-52s. Indeed, he was to perish shortly thereafter in a flying accident, according to the author).

So it is a book unencumbered by any modern references or neologisms, and thus is refreshingly mid-20th-century in its writing style and gravitas.

The narrator, too, is superb; what he lacks in pronunciation of German or French names of places or terms he more than makes up for in enunciation and a lack of the annoying "tics" that can be characteristic of some audiobook narrators (an unnatural emphasis between words that end and begin with "s," for example) or one mispronunciation (pronouncing "dour" to rhyme with "poor" inside of, correctly, with "shower') and other distracting (to me!) narration peccadilloes.

He reads in a pleasant, rich baritone with a regionless American accent and I wish that it were he behind *most* of the audiobooks I have listened to.

This is one of those audiobooks that you wish lasted for 60 hours, but it's definitely one that I will be glad to have in my permanent collection, to be re-listened to in the future for many, many years.

And even though I know the ending of this particular story, I'm anxious to get right back into the telling of it; I have maybe nine hours to go!

Martin Caidin was one of the great writers detailing various aspects of WW2 from the air. Black Thursday doesn’t disappoint. His writing style draws you in to the struggle from the strategic down to the personal level. Written in 1960, he benefits from personal accounts of the participants. I wish he had a bit more from the German fighter pilot experiences of attacking our massive bomber formations. Highly recommended

If any book highlights the greatest generation, this is one of them. The Schweinfurt raid was an absolute tragedy. It was the coming together of everything unimaginable that could have happened, but the bravery and fortitude of the men remains unquestioned and unparalleled. Oh to live in a world with real men who were willing to sacrifice it all for freedom. What a privilege we've had because of them. There are no words. Thank you Martin Caidin.

After finishing I want to go back and read a chapter over but could not because the book kept switching to Finished.

the story puts you straight into the planes of WW2

you feel, hear, see, fear, and think the same things that the many bravo pilots and bombers experienced in this highly intense true story.

Well told story of a tragic raid. Written in 1960 when participants were around for first-hand accounts.

The author does a great job of painting a picture of what it must have felt like to fight on either side of the horrific struggle that took in the air.

Exciting history of the war in the air of WWII

Remarkable story of the battle in the sky between the 8th Air Force and the Luftwaffe during WWII. A harrowing struggle to neutralize Hitlers war machine fought high in the air over Germany by pilots and bomber crews. A great read.

The Story of the Schweinfurt Raid was very well done, it is true to what life was like in the boomers and the very brave that flew them and crewed them.