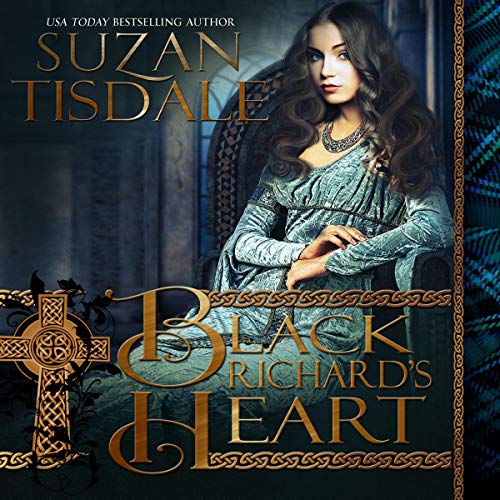 By: Suzan Tisdale
Narrated by: Brad Wills
Try for £0.00

Nearly killed while trying to win back his ancestral home, Black Richard MacCullough is left scarred and mangled; but some scars run far deeper than mere skin. No longer the handsome devil or kind man of his youth, now he focuses solely on rebuilding everything that was lost to the brutal Chisolms and traitorous MacRays. Revenge - while not nearly as important as keeping his clan from starving - is the only thing that keeps his bruised heart beating.

With his clan on the brink of starvation and annihilation, Black Richard doesn’t believe his life could get worse. Until King David II decides to put an end to the border wars himself, via a marriage between Black Richard and Aeschene MacRay, the daughter of his sworn enemy.

Locked away and all but forgotten because she is deemed imperfect and useless by her father, Aeschene MacRay holds no hope of ever having a husband and family of her own. But hope is the only thing she has left: Hope that her vision will miraculously return and that she will regain her father’s approval.

But when news arrives that she is to be married off to the chief of her father’s enemy, she has only two choices: put her faith and hope in the monster that is Black Richard MacCullough or remain in the prison her father has created for her.

When you’ve lost everything, any risk is worth the taking.

This book is fantastic. The narration was excellent and the narrator did
The story telling wonderfully. I read the book a long time ago. But to hear the story being told was delightful. I have a few Suzan Tisdale audiobooks and they are all amazing. I love your work Miss Tisdale.
I love the characters and how the families and characters often go from book to book. So we know their history . Well done.

The Main Characters are Unbelievably Juvenile

I wanted to like this book, really, but the characters are unbelievably naïve and say and think THE dumbest, most unrealistic things. Nonstop. I have been rolling my eyes every few minutes at the absurdly stupid things coming out of their mouths and their juvenile inner thoughts and overblown one-dimensional insecurities. The author beats us over the head with the same, superficial broken record hangups as seen by the characters about themselves. I get it. He's got nasty scars, and she's blind and thinks she's homely (which I just don't buy, since apparently she's stop-traffic stunning, so I'm sorry, but guys and everybody else would have noticed and fawned over her or gazed longingly for years. She doesn't start to gradually lose vision until she's 17, and given the time period, she'd more likely have already been married off, but that's another thing).

I feel like I'm reading a first time author's book for middle schoolers -- or written by a teenager or sheltered college student with no life experience. Yep, it's that level of immaturity at basic situation-reading skills and being pretty clueless of other people's actions and motivations. These people can't do basic adulting, even the 30-something hero who's a laird and respected warrior and raising his very young brothers and saving his near destitute clan and dealing with serious political maneuverings. He's quite frankly a narcissistic, oblivious idiot. And the author can't gel the innocent, insecure, emotionally abused but surprise! actually pretty strong and sure of herself and adventurous and socially astute mixed bag of qualities for the heroine; it's too idealistic and forced.

The hyperbole is also excessive, even for a romance book.

The whole plot/trope of this book has been done better many, many times by much better writers, so it's pretty easy to find a replacement if this is what you're in the mood for.

Narrator wasn't too bad, and I'll check out some of his other titles. Reading was good and melodic, easy to listen to...though accents were all a bit off, but not a deal breaker. But he cannot do kids' voices. At all.

Suzan Tisdale has a wonderful gift with words! You can count on her to keep your interest until the very last word! It was so good to at last hear Black Richard’s story. Brad Wills is such a fabulous narrator, I would love to give them both 10 stars! He is so talented, his accents are spot on with all the characters! I could listen to him read the phone book!

Totally one of my favorite stories, I loved the two main characters I enjoyed all the romance drama and action. Another great book for Suzan

Hated for it to end.

This has been my favorite book from Suzan Tisdale. I laughed and cried too many times to count. What I love about the author is that she brings two perfectly imperfect people to each other and makes them perfect together.

Suzan Tisdale at her best! Brad Wills is the consummate hero. Between the two of them they take you to where the story begins. Amazing! 😍❤️😍

Suzan Tisdale never writes anything less than outstanding stories. She just has a gift. This story melts your heart in so many ways. I laughed, I got mad at a few characters & I literally had tears falling from my eyes. It’s like I was picked up & carried away from the very beginning. And narrator Brad Wills brought every single word to life with great emotion. You hear the concern, sadness, pain, joy, humor, laughter, heartfelt warmth as he performs this story. He is the best. Don’t pass this audiobook by. It is a must have.

I just finished listening to this book and I wanted to listen to again, it was that good!

Fantastic book to listen to!!

I enjoyed every minute of this book. It was wonderfully written and narrated very well. Each character has so much life and depth...I highly recommend it!!!

I enjoyed listening to Brad Wills narration. The story was enjoyable but a little long. Worth a credit. Enjoy!😄

This was a A fun book to listened to. The narration was excellent I give it a solid 4.5 stars. She created a very good story with characters that you could easily imagine.