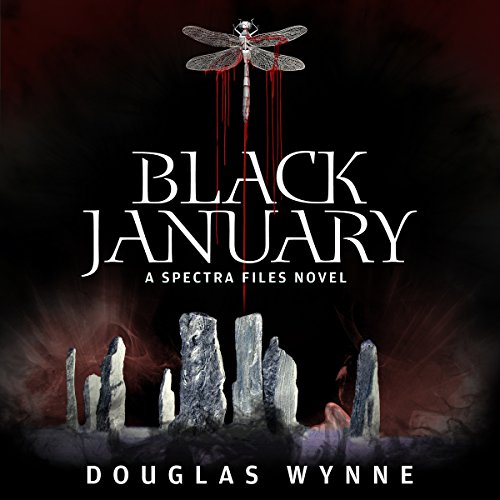 Welcome to the Wade house

Where the doors open you

Two years after the Starry Wisdom Church unleashed their dark gods in Boston, Becca Philips is trying to put the events of the Red Equinox behind her when Agent Brooks tracks her down in Brazil. Becca has been summoned back to Massachusetts by SPECTRA, the covert agency entrusted with keeping cosmic horrors at bay. Her special perception and skills are requested at the Wade House - a transfiguring mansion of portals to malevolent dimensions.

Becca would like to refuse, but Brooks believes her estranged father may be lost between worlds at the abandoned estate. As Becca struggles with grief and forgiveness, she joins a team of explorers uniquely suited to decode the secrets of the strange house in the black snow. But what secrets do her companions harbor? And who among them will take theirs to the grave?

What listeners say about Black January

As opposed to the large urban Boston and greater New England setting of Red Equinox, Black January takes place mostly in "one" environment: a haunted house. However, the haunted house, as one could guess in a Lovecraftian story, is not merely "one" location. That said, Wynne does an impeccable job at making the Wade House seem like a larger setting than a mere haunted house.

As opposed to the "Fringe" feeling I got from Red Equinox, Black January definitely has more a post-911 "X-Files" feel. Considering the size of the investigation, this difference is completely appropriate.

In regards to the Lovecraftian references, Wynne still does a suburb job at making the Easter Eggs fun, but not distracting to newer readers. In addition, he added some of his own Mythos creatures, which makes their role is the story so much more exciting.

(Vague) Spoiler Alert: The one most minor flaw in this story is how Wynne handles the a death of a character. Wynne's writing is very powerful in how the death of this particular character is handled, not necessary because of how one feels about that character, but how the reader emphasizes with the characters and their struggle of their loss. The flaw in how this is handled is, personally, I wish this series was longer and the character died, in the same way, but later. However, the Spectra files, as I understand it, is meant to be a trilogy, so the time spent with the character is appropriate in that context.

When I listened to Red Equinox, the narrator, Susan Saddler, was a struggle to listen to at times. This is not fault of Saddler as the diversity of the characters required a boldness to each voice to prevent them from confusing the reader and sometimes the accents and dialects were striking enough to pull one out of the story. However, in Black January, I became more comfortable with Saddler's voices for the character and began to interpret her voices as their voices, which made the Wynne's story much more cohesive.

This is shaping up to be one hell of a series!!

There is something wrong with the Wade House. Really wrong. For one, it is difficult to locate. It seems to hover just at the edges of your vision. Once you find it though and step inside, it has a way of manipulating itself. Changing. Rearraigning. Something ancient and evil lurks inside. And it’s hungry. It wants out.

After saving the world from the Red Equinox two years ago, Becca Philips and Agent Jason Brooks are back in action. The mission, to investigate the infamous Wade House with the help of their old pals at SPECTRA.

A very well written and entertaining Lovecraftian tale of the Old Gods and an excellent follow-up to Wynne’s “Red Equinox”. This is shaping up to be a hell of a series. Nice.

*I received a complimentary audio copy of this work from the author in exchange for an honest review.