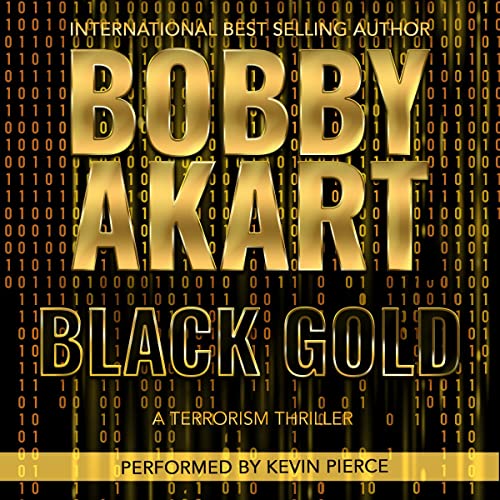 By: Bobby Akart
Narrated by: Kevin Pierce
Try for £0.00

Oil is the lifeblood of America.
Some see it as poisonous to the planet.
How far will both sides go as a battle rages over Black Gold?

A guerrilla war rages between the petroleum industry and eco-terrorists. As the violence escalates Texas oil producers fight back. The battle takes an unexpected turn, one that impacts every Texan and all of America. How far will both sides go in the fight over Black Gold?

The Texas Forever trilogy depicts the petroleum industry under attack from radical environmental terrorists. From extraction to refining to distribution, the conflict over BLACK GOLD as crude oil has been nicknamed, is subjected to violent tactics in an attempt to stem the nation's use of fossil fuels.

In Texas, independent oil producers fight back. As the saying goes, they're mad as hell and they aren't gonna take it anymore.

With the eco-terrorists stymied in their efforts and suffering casualties as well, they turn to another battlefield - cyber warfare. Tensions escalate and as the eco-terrorists achieve success, they decide to go big or go home. They set their sights on ERCOT - the Texas power grid.

This is the story of all out war between the oil industry and radical environmentalists who will learn not to mess with Texas. However, just as the battle appears to be won, another entity puts it's thumbs on the scale.

Million-copy best-selling author, Bobby Akart, delivers intense, up-all-night thrillers that have you whispering just one more chapter until the end.

What listeners say about Black Gold

I like the inclusion of the hypocritical viewpoint on the petroleum industry. Things could be better but the "anti" need to understand what they are truly requesting.

Bobby does it again!

Bobby Akart has become my favorite author. His books are always great and good for multiple readings. This is yet another great book. He is constant and uses great narrators for all of his books. Thank you Bobby and keep up the amazing work you do for all of us.

Great Book I see it being a real headline soon.

Another great book by Bobby. Unfortunately I see this as a real possibility in today’s crazy world. If not from environmental terrorist a Nation State both are more than capable of bringing our great country to its knees.

I enjoy Bobby Akart’s work. And, Kevin is my favorite narrator. Because of my faith in this team I didn’t hesitate to purchase this book. It was great. From start to finish - I thoroughly enjoyed. Not a post apocalyptic thriller by any means, however, a little change now and again is good. Great job guys!

Bobby Akart has masterfully written this story that though fictional, is a very likely scenario in today’s reality. Cyber attacks that can cripple a nation, all in the name of ecological extremism. The narration is extremely well done and I had a tough time even pausing the story, the suspense of what will happen next getting the best of me. Another excellent book from Bobby Akart!

Akart pens another gem! Pierce is reliably excellent in executing the performance

Bobby Akart has a habit of generating well researched stories that are not only plausible, but yet again provide a cautionary tale to prepare for. I want to commend Mr. Akart in his selection for the reader too.

Kevin Pierce is easily the best performer for this genre, bar none. With several hundred titles in my audio book library, I now find myself searching for books he has read due to the excellence in story-telling, character differentiation and narration he brings to every one I have ever listens to. In a review I read a while back, one Pierce fan said if he read the back of a shampoo bottle aloud it would be interesting. They were not wrong.

Good, hopefully not the only book..

I enjoyed this book. It shows the craziness that is happening in the world and whether or not anyone has questions if it is accurate, it is. Groups have been threatening capitalism for lord knows why for years now. This story is just breaching the surface of the crazy in the world. Hopefully there are more books in this (hopefully a series). Highly recommend.

I could not stop listening to this book. Mr. Akart’s books just keep getting better with each novel he releases. You won’t be disappointed!!!

This is another great story with fantastic characters and action packed plot. Kevin Pierce is my favorite narrator by far. When these two come together I don’t even hesitate adding that book to my library.