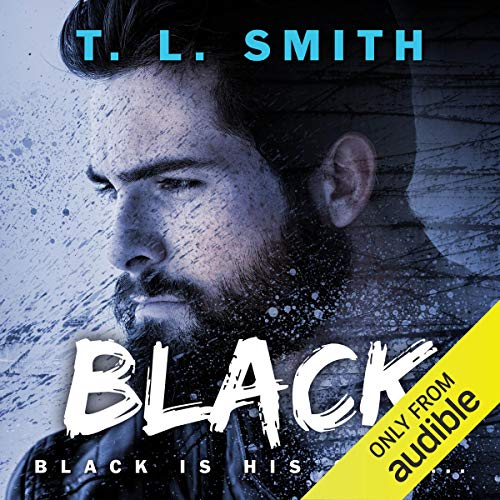 I am loyal, but I will betray you. I am strong, but I have scars. I am an angel, but the devil. I met her when I was 16 and she was a breath of fresh air. She swooped in, making me smile. But then she left, taking my next breath with her. Her smile could light up a room, making my black heart pitter patter. I found her again 10 years later, with a syringe in her arm. Blood coming from between her legs. She was broken and I was glad she was broken. She wouldn't think less of me and my damaged ways.

Would you listen to Black again? Why?
Yes since I adore this story!

What other books might you compare Black to and why?
RED by TL Smith

What does Cat Gould and P. J. Ochlan bring to the story that you wouldn’t experience if you just read the book?
the narration was spot on! Plus the accents!! Swoon!

If you could rename Black, what would you call it?
The Grim Reaper

Any additional comments?
T.L. Smith has done it! I totally feel gutted at this moment!
I dove right into this book I couldn't put it down.
Black is was everything I was hoping it would be dark, cunning, gritty and lustful!
There were moments in the book where I thought. I was going to need a blood pressure pill!
I must say there is something about broken characters that brings me to my knees.
Then there is a frickin Cliffhanger! Yes, a cliffhanger! KIll ME NOW!

I struggled to finish the story Story line was good narration was bad. I will not be ordering any of the Black stories .

This is the first but not the last book from this author for me. I cried, I hung on the words waiting for what was coming next. The author wrote a story that held me from beginning to the end. I cannot wait to see where the rest of the story takes me.

If you could sum up Black in three words, what would they be?

What was one of the most memorable moments of Black?

When Black finds himself becoming a " father " without realizing what he has done. I felt the humor and feeling there- up until this point, I am thinking what the absolute mind-altering f*** is going on?

Have you listened to any of Cat Gould and P. J. Ochlan ’s other performances before? How does this one compare?

No, this is my first time!
I will be honest, at first, I did not think they'd be my ears cup of tea, but quickly they grew on me, and I could not picture the characters any other way.

Who was the most memorable character of Black and why?

Black and Hayden ( Ha )
Black because I am still trying to wrap my head around that dynamic, he is this stone cold killer, that cannot have feelings - it interferes with his job, but his mannerisms contradict him! MEN I swear! Hayden, I had a soft spot for the boy, just because I felt terrible for him, and he loved Black knowing he was a dark man anyway.
I could not bring myself to like Rose- the girl was whiny, supposed to be taking care of herself but seemed like she always needed others, had an excuse for everything and was forever taking a beating but had the nerve to give Black moral judgement calls for what he did even though it was all for her. ** Look at me getting all worked up** ha

So! This one took me a while to get into- now normally I would have DNF'd it and moved on.But something kept pulling me back in- There are a lot ( IMO of course ) characters and settings introduced which can cause confusion with some interesting emotional plays I did not quite understand. I have read many MC series so that aspect is not new.. Regardless, I am glad that I kept listening, for me, the storyline picked up about halfway through after all back and forth stuff, by that point, I was drawn in and could not stop listening!
It became an emotional bloodbath! Crazy hot, heart hurt, drama-laced, fast-moving had me wanting more!
With a surprise, Oh, No! It did not just end like that?! Humpfh!

Sigh! Well, I have to say again I am glad I kept on listening, I would have hated myself or missing out on that second half. Now I am going to have to go find the next book! Well done sucking me in- that I did not see coming!

I thought this book had a rough start, I guess because the characters were a little rough around the edges. However, I'm pretty sure that is where the author wanted to go with the book. It all fits in appropriately for this MC-type story. The author certainly brought out the bad boy and innocent girl tale. The author did a great job with the characters. Even though Black is a bad boy, he has a beautiful spirit. Even though Rose, is weak, she is also very strong. The narrators did a great job with the characters and their personalities. I have the next two books lined up to read. We'll see how they go.

good read. however, warning is it is a dark and 3motionally draining love story. I'm ready to read RED.

This book is amazing!! And the audiobook version of it is absolutely mind blowing! I'm in love!

Loved this story, the characters and especially the narration. Didn't realize until the very end that there would be more of Rose and Liam's story and I'm so excited.

Save your money. I listened to the first 3 chapters. The book so far has been quite confusing. I do not like the voices in this book. The accents arebbc.cobevera mix between British and Australian, not very believable. This book did not hold my attention well enough to even listen beyond chapter 5.

you can't end a story the way this one ended. I need an epilogue or about 10 additional chapters. one of the reviews stated that it was difficult to understand the narrator because of his thick accent and I would have to agree except once you get into the book I found that the narrator had an accident of true sex appeal. honestly, I could listen to him recite the dictionary and still be turned on.