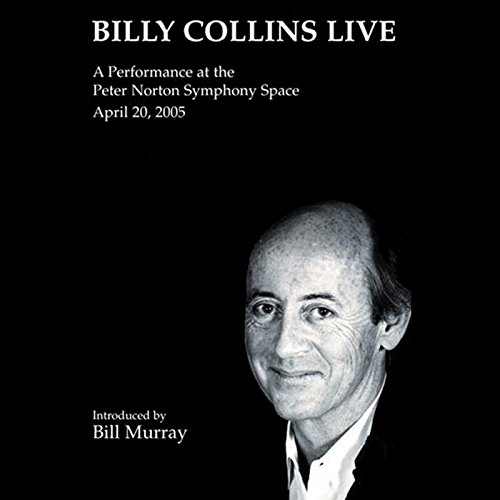 Why we think it's Essential: If you prefer your poetry dry, stale and dusty, stay clear of this program. However, if you prefer it to be warm, funny, and exciting, you are in luck. Or, if you don't know if you like poetry, I can assure you, you will enjoy Collins' accessible work. This former poet laureate offers such a wonderful performance that he upstages the introductory banter by comedian Bill Murray. — Beth Anderson

In this exclusive audio publishing event, Billy Collins, former U.S. Poet Laureate, shares an evening of his poetry in a benefit reading for WNYC, New York Public Radio. Often compared to Robert Frost, his poetry has been embraced by people of all ages and backgrounds, and his readings are most often standing room only.

Performed by the author at Peter Norton Symphony Space in New York City, Billy Collins reads 24 of his poems, including "Dharma", a spiritual yet humbling ode to man's best friend, "The Lanyard", an amusing recollection about the popular, if not pointless, summer camp pastime, and "Consolation", a tongue-in-cheek reflection of a cancelled European trip, and the benefits of staying home instead. In addition to the poetry readings, Collins also spends some time in a brief question and answer session where he reflects on what makes good poetry, his own process of reaching his audiences as a poet, the success of his Poetry 180 programs in schools nationwide, and an amusing sidebar on his memories growing up as an only child. At times pensive and sardonic, amusing and subtly sarcastic, Billy Collins Live celebrates both the simple and the complex in a language that appeals to all.

A master of the art?

Does Not Get Better Than This

I can't say enough. Well, I could but I would have to write for years. This is "poetry" that EVERYONE will enjoy, and I would highly recommend for teens and children; it will appeal to them not only on a humorous level, but it is without guile and pretense--it relates on a personal level with every one. My husband ABHORS poetry (except for some ditty about a man from Nantucket) and he listened to the whole performance after I had him listen to the dog poem (guaranteed to have every dog owner chuckling). In few precise words, Mr. Collins can be silly and fun, then powerfully emotional and personal. Former poet laureate, Billy Collins, is a national treasure. *My review has already been longer than most of his poems.

I have recommended this book to everyone I know who has an Audilbe Account. I love it. It's funny and very well done.

The humor. Billy Collins is so funny.

Have you listened to any of Billy Collins’s other performances before? How does this one compare?

It makes you laugh from beginning to the end.

Get this. You won't be disappointed. The only slight negative is that it is short.

Now, this is poetry!

Billy Collins is wonderful. I have downloaded 2 of his performances, but this is the best, by far. He is so humorous while touching the things in our lives that we secretly think about but would like to talk about. Some of the poems are so serious that they are funny. He makes us realize that all is not lost - we are here and we should enjoy. I say, enjoy this CD

this couldn't be more fun!

this is so much fun to listen to, one of the few that I will listen to again and again

I guess poetry is supposed to be "serious" but I found myself laughing out loud at some of his lines. It's almost as if he's parodying the art form. And yet somehow he pulls it off and offers piercing insights into daily life. I plan on reading more of his work.

I love this program. Billy is clever and funny without being self absorbed. I listen to this a lot and it never gets old; just not too often...

Enjoyed the reading. First time listening to Billy Collins. He was pleasant to listen to.

It was fascinating to hear Billy reading his own work. I love the way his poems draw us into a simple, so often humorous, observation about something then flip us, along with the poem, upside down, wondering how we got there.

If it were a book, I couldn't have put it down!

Fascinating listening. Funny, brilliant, tongue-in-cheek. This is a guy that I would love to have dinner with, or have as a friend. Sparkling intimate readings; as if he were reading just for me. Billy Collins never disappoints.