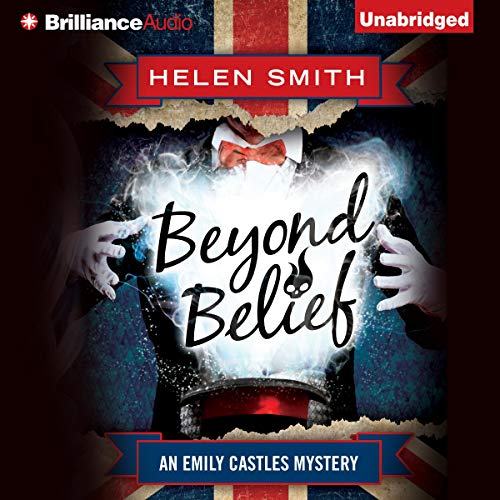 Only a future-crimes investigator can beat a killer’s sleight of hand.

When famed psychic Perspicacious Peg foresees a murder at England’s Belief and Beyond conference, her science-minded colleagues recruit 26-year-old Emily Castle's to report on the event as a "future-crimes investigator". The likely victim: Edmund Zenon, the celebrated and outspoken magician planning a daring conference stunt - and offering 50,000 pounds to anyone who can prove that the paranormal exists.

In the lovely seaside town of Torquay, Emily meets a colorful cast of characters: a dramatic fortune-teller, psychic dachshunds and their friendly owner, devastated parents mourning their late son, a small but fervent religious cult, and more. Tensions fly as science, the supernatural, and the spiritual clash. But once a body count begins, Emily must excuse herself from the conference’s séances and use old-fashioned detective work to find the killer.

What listeners say about Beyond Belief

This might be a reasonable read - light, but ok to pass the time. However, the narrator's voice sounds like she should be talking about "lashings of ginger beer" or "I'll thqueem and thqueem and thqueem until I'm thick" I tried to keep going, as sometimes you can become used to a voice and it will become less grating, but in this case, it didn't. I listened to about 12 chapters, realised that almost nothing had happened and that the narration was still just as irritating as it was at the beginning, and so I gave up.

Beyond Belief by Helen Smith is an entertaining light fast audible listen. . Conference set in Torquay, Edmund Zenon has offered fifty thousand pounds to who can prove that paranormal is real. There cast of characters are diverse and the story is fast flowing.

A Murder mystery with humour thrown in. A must listen to this audible story.

Strange characters. I listened through Audible. The narrator was good and the right voice for this tale. I wasn't sure about the weird tale. At the end of the book I was not sure why it had happened? Some humor, 3 deaths, a water trick. Odd story.