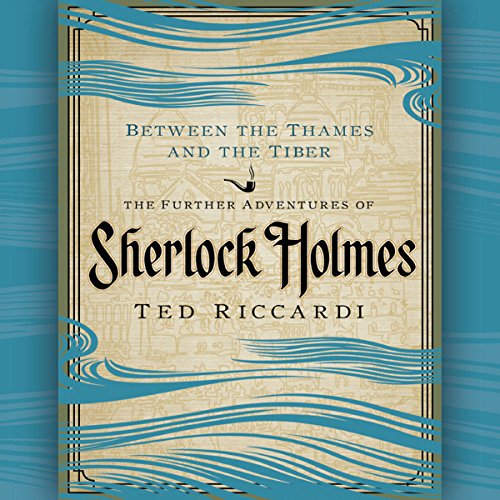 Between the Thames and the Tiber

By: Ted Riccardi
Narrated by: Simon Prebble
Try for £0.00

Sherlock Holmes and Dr. Watson traverse the British Isles and the Italian peninsula in a rousing new series of adventures. After a thrilling jaunt in the Far East, Holmes and Watson return to England to address an inheritance left by one of Watson's relatives in Cornwall, half of which he gave to his dear friend, Sherlock Holmes. Financially secure, the two are now free to spend as much time on Baker Street and the Continent as they please, and the duo find themselves as comfortable in Rome on the banks of the Tiber as the Thames.

As Holmes rationalizes and ratiocinates his way through case after case - from "The Case of Two Bohemes" to "A Singular Event in Tranquebar" - it's all in a day's work, until clues surface that his great nemesis, Professor James Moriarty, might still be alive….

What listeners say about Between the Thames and the Tiber

Not too bad for Holmes pastiches.

Sometimes slips into Americanisms and ignorance of English (not British, no such thing) law, and narration slipshod on articulation of consonants at times, which can be confusing. Narrator doesn't often sound native English Standard English speaker.

Simon Prebble is an excellent performer, but the material is just not that interesting. And having sections in Italian or French, or German does not make it more worth listening to for me. While it does suggest a couple of different possibilities, it is just kind of dull. I didn't even make it into the 3rd story. Or,was it the second. Can't remember.

What did you love best about Between the Thames and the Tiber?

i'd never heard of ted riccardi before i bought this book and his "oriental casebook of sherlock holmes" so i had zero expectations, which is probably the best way to come to any new author. he has clearly loved and studied all of the original stories, and has captured the style of conan doyle without being slavishly imitative. plus he's cleverly able to slide these new adventures into spaces left by the canon. i think it helps that he's stuck with short stories of a similar length to the ones that conan doyle penned. there's a perfectly sound argument for letting the "real" stories stand alone and never seeking out any new adventures; but if you're willing to entertain the idea of someone else adding their own twist, i think you might be pleasantly surprised by ted riccardi!

I bought this book because I love Simon Prebble's narration. I listen to Ian Rutledge books over and over!

The stories are great. kept my interest while weeding my 2700 peonies!

I really love these stories

What I really enjoyed most about these stories is how truly they follow the vein of the original storytelling by Sir Arthur Conan Doyle. So many authors take a lot of liberties with the characters and while those derivations are interesting this feels much more true. The performance is very well done and very enjoyable, I have listened to it multiple times. I would recommend this and the other book of Sherlock Holmes stories by the same author to any Sherlock Holmes fan!

If you're a fan of Sherlock stories, you can add this to your list...interesting stories, true to what you'd expect. Nothing outstanding, but nothing to deter you...in the middle of the list of available Holmes listens.