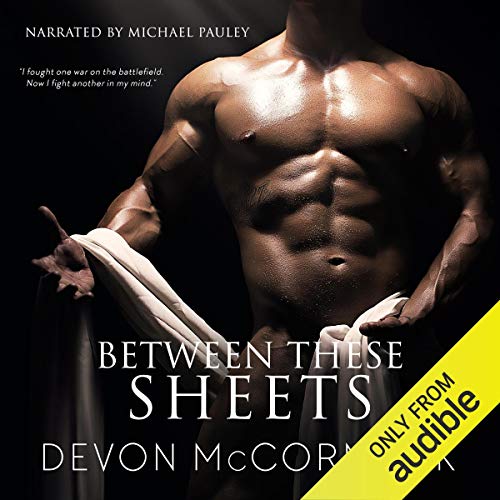 By: Devon McCormack
Narrated by: Michael Dean
Try for £0.00

"I fought one war on the battlefield. Now I fight another in my mind."

Jay is always on the run - always looking for the next place to start a new life. But no matter how much he moves, he can't escape the painful memories that haunt him. As he settles into his latest job in the warehouse at a glass bottle factory, he finds himself the target of his co-workers' teasing. When he takes a stand against one of the bullies, a fight breaks out. His boss, a war vet named Reese, steps in, and Jay accidentally shoves him to the ground, revealing Reese's prosthetic leg. Jay's sure he's gonna lose his job, but he's blown away when he's given another shot.

Reese is annoyed by the new guy. Jay is reckless and temper-prone. Maybe Reese shouldn't have given him a second chance, but his attitude reminds him of his war buddy - a guy who he cared deeply for and who he lost under tragic circumstances. He just hopes Jay doesn't let him down.

When an accident in the factory triggers one of Reese's PTSD episodes, Jay returns the favor by being there for him and keeping anyone else from discovering the incident. Reese wants to move on and forget it ever happened, but Jay won't let it go. And as much as Reese tries to keep his distance, there's a heat - a passion - between them that he can't resist. It leads them to the bedroom again and again, but Reese quickly realizes they've ignited more than the sparks they create between the sheets. And despite the tough-guy façade Jay puts on, underneath there's a soul just as tortured and hurt as he is. He's starting to fall for Jay, but he knows there's a dark storm lurking in the back of his own mind - a storm that will return one day and destroy the beautiful connection they share.

What listeners say about Between These Sheets

Two men who are co-workers, both broken by different things, Hook up and find that they want more.

Hot hot sex mixed in with the emotions that come up with PTSD past heartbreak and a history of child abuse (death of a sibling).

I read Reese and Jay's story when it first came out and was blown away by the depth of the story. Listening to Michael Pauley bringing it even more to life, with his incredible narration was almost indescribable. I laughed, hoped, panicked, cried and smiled. Truly an amazing story and truly an awesome narrator. Thank you Devon. Thank you Michael.

Story: 5 stars. Both main characters are so flawed. Both men suffered from traumatic past so you bet there was some angst for them to work through but it was worth it.

Narration: 5 stars. I have listened to a plethora of audio books and Michael Pauley is the most amazing narrator ever. This was a great story but the narrator made listening to it terrific... and the way he does a sex scene is freaking awesome.

Overall: 5 stars. This was a challenging story to tell bit the author did an excellent job weaving this tale that was sometimes painful , sometimes sweet but always freaking hot. And I mean freaking HOT.

I have never enjoyed so much m&m book as I did with this one! I fell in love with the characters they are so amazing
Reis made me feel everything it felt back then and now I was thrilled with his character it was absolutely enchanting ❤❤❤

I honestly can't put into words how much I loved this book. It's one of my top five reads ever.

Like most people I have heard of PTSD and, like most people, I have only a vague idea what it involves. Until this book which was about a man who suffered from this illness. The story was about how PTSD affected his ability to hold a job and any relatioonship

The Real of Real Love

This book and the audio version of it are in a word INTENSE. The feels of the story draw you in and the power of Michael's performance kick that intensity up to an 11. This is the first solo book i've read of Devon's and I couldn't have asked for a better introduction to his work. The show of what it means to be really and truly in love with a broken and healing man is astounding. Watching it unfold is painful but the passion and honesty are worth the pain. Seeing these two broken men find a way despite all the horror they've endured to find faith in the love they feel is incredible and the journey, while not always pleasant is worth it for the pay off. I cannot recommend this book enough. It's amazing :)

LOVE THIS BOOK 5 STARE ALL THE WAY

YES AND HE IS GREAT

Excellent! Took me by total surprise!

Devon, you did a wonderful job with this novel. This could be mainstream for everyone if the male sex scenes weren't so vividly described (which by the way, I'm not complaining, just observing a potential larger audience). The depth of your understanding of the characters and their challenges was downright rivoting to me.

Michael, very good job. Your inflections and choices of voices was perfect for me.

Listener, this is worth every moment and every penny you have to spend. Be prepared for some deep subject matter and some inner reflection. Plus some very sensual moments between these boys.

This was an emotional, deep story, that, with perhaps a little too much self-pitying from Reece, still managed to evoke sympathy for his character.

Of all of Devon McCormack's books so far, this one plunged more deeply into the mind of one of the main characters- Reece- than McCormack has shown in his other stories. That is not to say the characters were less well developed in his other books. In this one, Reece, is a very troubled soul and that is a challenge for an author to get the breadth and depth of a character across: more difficult in books of this genre where the author is inviting sexual arousal from the reader but not to let the story become nothing more than a pornographic read. McCormack balanced the angst generated by the outbursts of PTSD from Reece, with delicious pudendal arousal. It helped that his partner, Jay, a hot-head with street smarts, is able to deal with Reece's PTSD with understanding and empathy - traits, it would seem, he did not express in his life very well, until he met Reece.

I loved 'Fixer Upper' for the same reasons: that of balancing the potential for trivializing serious relationship issues by jarring the reader with scenes of blatant sexual titillation – something that Devon manages to avoid as an author and this makes his stories more than just erotica with a little meat on the 'bones.&quot;
This is aided by having the breathy sensuality of Michael Pauley's vocal style take the reader to the right emotional place throughout the book. His pacing is superb.