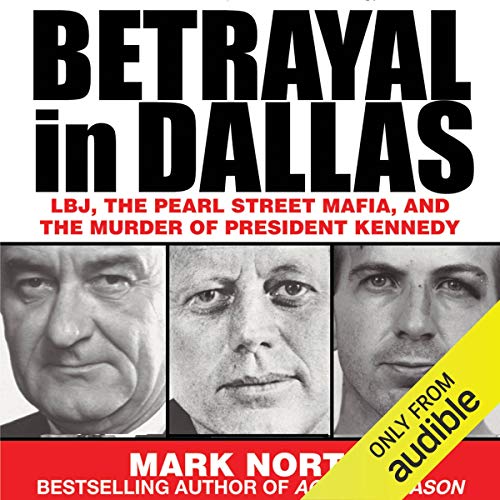 AudioFile Earphones Award recipient Erik Davies's forthright performance adeptly delivers the shocking revelations of this audiobook with authority. Mark North employs intensive research - including classified federal documents unknown to the public and research community - to support his allegations that FBI director J. Edgar Hoover and Lyndon B. Johnson cooperated with the Civello crime family to have John F. Kennedy assassinated. Davies' voice radiates steel and certainty as North thoroughly outlines the trail of corruption and political ambitions that led to this national tragedy.

Finally, the truth behind the crime of the twentieth century!

Here's what we now know: John F. Kennedy was assassinated in Dallas by Mafia contract killers hired by Louisiana mob boss Carlos Marcello. Kennedy was killed in that city because it was the only place in the country where a crime of that magnitude could be committed without fear of punishment. Long-time local district attorney Henry Wade, an LBJ crony who would have sole jurisdiction over the prosecution of those responsible, had been corrupted by the local Civello crime family. Lyndon B. Johnson, while a U.S. senator during the 1950s, had accepted bribes from the same mobsters so that they could avoid deportation.

With incredible detail and documentation, Mark North pieces the puzzle together to reveal how in late 1961, U.S. Attorney General Robert Kennedy and his brother John, who hated LBJ, initiated a covert Organized Crime Task Force investigation of the Civello mob in Dallas. They understood that destroying the Dallas Mafia would also destroy LBJ. Johnson, through Wade and local federal officials he had placed in power, learned of the plan and cooperated with the Civello mob to have JFK killed. Johnson did this, in part, because he had the power to control any subsequent federal investigation via FBI director J. Edgar Hoover. Johnson had leverage over Hoover because he had learned that the director and his assistant Clyde Tolson were lovers. After the Mafia killed JFK, Johnson stopped Robert Kennedy's prosecution of the Dallas Mafia.

Betrayal in Dallas is unlike any book written on the JFK assassination. Because its conclusions are based on classified federal documents unknown to the public and research community, it will startle and convince all those who read it. It is inevitable that, at some point, any great historical truth becomes known.

Betrayal in Dallas is nothing less than the vehicle for that moment. It is what the American people have been waiting for since November 22, 1963.

What listeners say about Betrayal in Dallas

A thorough researched and reference account of the coup that America may not wish to acknowledge. The facts, as laid down here, are undeniable. There should now be some accounting for the sake of history beginning with the name of Edgar J. Hoover being removed from the FBI headquarters building

The Gangland Point of View

This book is a very enjoyable listening experience. There are a number of books that hypothesize an LBJ involvement in the Kennedy Assassination, and some of them marshall the evidence quite well. Some recent books focus mostly on LBJ's political connections. Mark North concentrates mostly on the underworld of Dallas and New Orleans.

The author does an excellent job of making his case with supporting, interwoven facts. However, he gets a little repetitive in the last third of the book when he calls out crooks for being dishonest. But, a valuable and enjoyable read.

I hope my friends read this. I am usually skeptical of conspiracy theories. This is too much to deny. It is amazing what our elected leaders continue to feed us in order to maintain power. I only ask that you read this with an open mind. If this is true, Shame on Sarah Hughes and LBJ.

was amazed at the amount of research that went into this book. the truth has finally seen the light of day. a must read for anyone seeking the truth about the murder of JFK.

Fresh insight into the Dallas underworld that brought down the most popular head of state in modern times. Erik Davies is an expert narrator and Mark North a great author who has done unique research. It's too unfortunate that this country has been led by three criminal administrations that originated from the Texas Military Industrial Complex. This is perhaps why we are in such disarray now. We will never again have as charismatic and classy a President as John Kennedy nor as bold and challenging a leader as Ronald Reagan to make us believe in ourselves and to give us the national pride that we so richly deserve as Americans. No wonder both of these men were shot while in office. This book should have been a national best-seller. I'm amazed it was not.

Besides a boring narrator, I couldn't find any data that backs up most of the first few chapters. didn't even finish. Thankfully is was only 1 credit, or I would feel cheated.