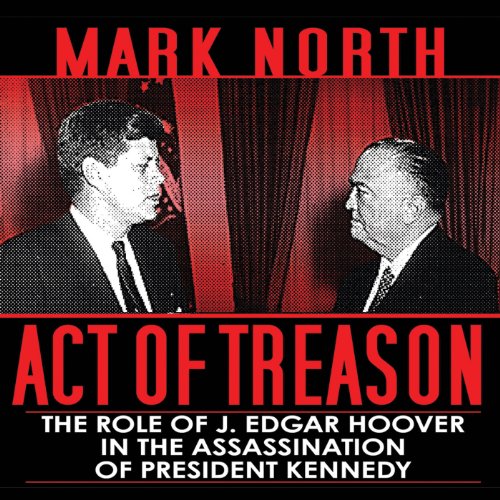 By: Mark North
Narrated by: William Hughes
Try for £0.00

Few questions in 20th century history are as divisive as that of who killed John F. Kennedy. In Act of Treason, Mark North places the blame with the New Orleans mafia, but also points a finger at former FBI director J. Edgar Hoover, whom he says learned of the assassination plan but did nothing to stop it. In clear, matter-of-fact tones that at times recall an old radio serial, performer William Hughes lays out North's detailed evidence, which covers Hoover's rule by fear, his distaste for Kennedy, and his close relationship with Lyndon B. Johnson (allegedly dissatisfied with his post as Vice President). Whether or not listeners agree with North's thesis, those fascinated by Kennedy's mysterious death will find plenty to chew over here.

In this meticulously researched classic of the JFK conspiracy genre that Library Journal calls "sensational", Mark North argues convincingly that President John F. Kennedy died as the result of a plot masterminded by Louisiana Mafia chieftain Carlos Marcello - and, more importantly, that FBI chief J. Edgar Hoover learned early on about the plan but did nothing to stop it. Hoover warned no one - not the Dallas police, not the Secret Service. His motives, North suggests, stemmed from a fervent hatred of Kennedy and fear that the President would eventually fire him. He is documented as longing to succeed Vice President Lyndon Johnson - a man Hoover "controlled" due to blackmail and scandals. Hoover’s day-to-day running of the FBI, his strange personality, and his backroom dealings are brought to life using an extensive collection of press clippings, government documents, and other original sources.

Act of Treason is a must-listen for any citizen who believes the Warren Commission failed miserably in its attempt to solve one of modern America’s most pressing mysteries: Who killed JFK?

What listeners say about Act of Treason

Proof that JFK was killed by a conspiracy!

Where does Act of Treason rank among all the audiobooks you’ve listened to so far?

One of the best.

Further proof that JFK died as a result of a conspiracy.

Have you listened to any of William Hughes’s other performances? How does this one compare?

More proof that JFK was killed in a government controlled conspiracy and the American public continue to be misled.

The dark chareacters of LBJ and Hoover exposed.

This is a long and incredibly detailed book clearly the result of a great deal of painstaking research. It sets out a very detailed timeline of events from the time Kennedy took office past the assassination and up until the conclusion of the Warren Commission. It feels almost like a reference book and an abridged audio book version may have worked better.
It does at times feel like its labouring a little. That said its pretty devastating on the characters of Lyndon Johnson and Edgar Hoover. The coming together of these two characters was truly a disaster for the United States. I cant say I agree with the premise of the book that only the Mafia were involved and the Hoover controlled FBI simply looked the other way and then covered it up with LBJ's full connivance. I believe the assassination conspiracy was much bigger.

Would you consider the audio edition of Act of Treason to be better than the print version?

I'm not much into reading books as I have a pretty busy job/life reading throughout the day. That's why I like Audible.com. I just continue to do tasks around the house and listen, I get value out this method. On the Act of Treason, I did not know the detail of the Kennedy and Hoover relationship. This opened my eyes to the fact that Kennedy had his work cut out just working issues out with Hoover. A lot more info on facts leading up to the assassination that I had not heard before. Enjoyed it and would recommend it to anyone who has an interest in this Historical event.

Have you listened to any of William Hughes’s other performances before? How does this one compare?

This is the first one.

No not at all. I knew I would listen to a little at a time.

I did enjoy it very much.

Reading the lines between the lines.

Mark North just makes it plain. If only America was brave enough to look in the mirror...