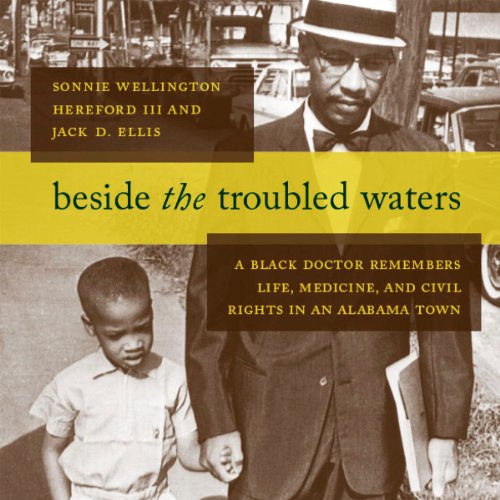 Beside the Troubled Waters

Beside the Troubled Waters is a memoir by an African-American physician in Alabama whose story in many ways epitomizes the lives and careers of Black doctors in the south during the segregationist era while also illustrating the diversity of the Black experience in the medical profession. Based on interviews conducted with Hereford over 10 years, the account includes his childhood and youth as the son of a Black sharecropper and Primitive Baptist minister in Madison County, Alabama, during the Depression; his education at Huntsville's all-Black Councill School and medical training at Meharry Medical College in Nashville; his medical practice in Huntsville's Black community beginning in 1956; his efforts to overcome the racism he met in the White medical community; his participation in the civil rights movement in Huntsville; and his later problems with the Medicaid program and state medical authorities, which eventually led to the loss of his license.

Hereford's memoir stands out because of its medical and civil rights themes, and also because of its compelling account of the professional ruin Hereford encountered after 37 years of practice, as the end of segregation and the federal role in medical care placed Black doctors in competition with White ones for the first time.

"Beside the Troubled Waters is a straightforward, compelling narrative that makes a powerful impact.” ( The Huntsville Times)
“This is an important book. It deserves a wide and intelligent readership.” (Gregory Michael Dorr, author of Segregation's Science: Eugenics and Society in Virginia)

What listeners say about Beside the Troubled Waters

Well worth your time :)

A really interesting look at the history of civil rights, medicine, segregation and the daily life of black people in the American south. This book is well worth a read and one is left wondering if someone will one day make a movie. It’s full of little titbits as well such and the mother who could not pay for her delivery so her son came back 20 year later to pay for his own birth! Highly recommended!

Also the narrator is good :)

This was a story that needed to be told. All young people in the medical profession must read this story. Thank you Dr Sonnie Hereford for your contribution to the struggle and medicine.

Well written and well read. An extraordinary story about an exceptional man rising from the segregated south only to be brought down in our supposedly post-segregation country. A rare window into life in the south.

This recording encompasses the story of a true HERO. It's worth every penny! Listen and go on heroic hourney: feel the pain, but remain unbroken in the end. This recording has it all and if you've thought about dealing with adversity, take the time out and listen to this book because you'll be glad you did. Thanks for sharing your story, Doc!