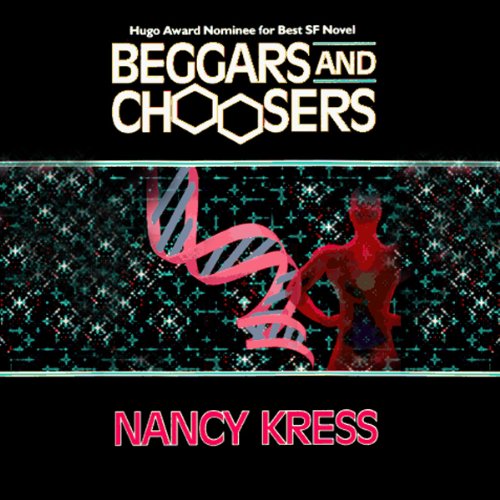 In a future America strangely altered by genetic modifications, millions of ordinary people are supported by the efforts of handsome and intellectually-superior gene-modified humans. These, in turn, are running scared in the face of the near-superhuman powers of the Sleepless, radically altered humans who have their own agenda for humanity. The Sleepless have withdrawn from the rest of the race to an island retreat, from which they periodically release dazzling scientific advances. Most of the world is on the verge of collapse, overburdened by a population of jobless drones and racked by the results of irresponsible genetic research and nanotechnology. Will the world be saved? And for whom?
©1994 Nancy Kress (P)2009 Blackstone Audio, Inc.
Fantasy Science Fiction
Show More Show Less

"An excellent and thoughtful work of science." (Publishers Weekly)
"Beggars and Choosers will terrify, delight, enrage, and engage." (School Library Journal)
"Fearlessly addresses a host of ethical quandaries while simultaneously relating a vivid tale of people trapped by their biological destinies." (Library Journal)

What listeners say about Beggars and Choosers

I just finish this book days after US citizens broke into the Capitol the United States of America. This book is eerie in its similarities to what we faced on January 6, 2021, just with a nanotech-CRISPR slant. I admit to being stunned when I heard the copyright on this book was 1994. Would recommend.

Oh what a tangled web we weave...

Nancy Kress' Beggars and Choosers is the middle offering in her Beggars trilogy. This story take place in the early 22nd century. The US has evolved to a deprecating state with 80% of the population as 'Livers' who are basically on the government dole. The 'donkeys' are the gene-mod'd group that maintains the crumbling conditions. While the original Sleepless are in the background developing technology, the select 'Supers' continue to play the disruptive angle. The tale is relayed from the perspectives of three characters, a Liver named Billy, a donkey (Diana) who is on the trail of Miranda Scharifi who is believed to be up to no good, and the Lucid Dreamer, Drew Arlene. Billy provides a view into Liver life. Diana experiences the tension and resentment of the Livers as she goes undercover to find Miranda. Drew has a falling out with the Supers and ends up a prisoner of a Liver insurgency group that opposes any and all gene-mods. Miranda and her Supers have cooked up a big surprise for everyone.

Kress captures the essence of a hyperpolarized society of the haves and have-nots as well as the Rube Goldberg accommodations in an attempt to preserve the appearance of 'democracy' and 'equitable' distribution of goods and services. Ironically, while she has crafted a well organized timeline for this development, her vision is coming into view about 100 years sooner and without the need for genetic engineering. The philosophical discussions of being human relative to genetic heritage make for riveting listening.

The choice of multiple narrators was wide given the unique and distinct perspectives offered. Pacing is brisk and while there is little in the way of real action scenes, the listening is quick.

Voice better then book 1st. They should do man for all male & vice versa.

A lot of wrong

So, it is the future. In this future you have genetically modified and pure stock humans. The modified humans " do all the work" and the unmodified are all lazy good for nothings who live off the backs of the hard working modified. Add to this now a black southern family that are so stereotyped Southern Black it hurts. They speak in clipped english, insert their own verbs and nouns, skipping pronouns, adjectives and adverbs. They shun knowledge and covet ignorance, putting down intelligent female members of the family and discouraging going to school and learning. This girl is acting too much like a modified, wanting more and being smart. Not to my taste. The male narrator does not do a good job either. Whether it is the narrator or the source material I cannot tell.

Narration and plot are both winners

The characters and differing view points were are very believable. Some imaginative "whatifs" were fun to see play out. I will be searching for more by the author Nancy Kress!

So how does the main character get killed off with no mention of the rest of her people finding out and no memorial service or funeral? If it hadn't been two shots to the head, I could hope she somehow was saved. And I must have missed the explanation of the plan and why dude betrayed his woman. Unhappy with the gaps but maybe the next book will elaborate.

Not that great again but still good

Yet not that outstanding as Beggars In Spain which ideas and storytelling perspective I really enjoyed, this book could still be considered a good read worth it, in general.

I find it quite difficult to get accustomed to Drew's voice but other's performance is roughly how I imagined.

Excellent except for Drew's voice actor. I found his voice grating. I hope Lizzie is in the next book.

This wasn't as good as Beggars in Spain. ..but only because Spain was my glimps of this alternate "Gene Mod" reality. Future really. Chooser's is an excellent stand alone. Highly recommended.

Begins to beg some of its own questions

This is a solid sequel to Beggars in Spain, but it simply does not live up to the original. There is excellent further development of some of the key characters from book one, but some of the very clever and thought-provoking questions raised in the original are begged here, and the story line, rather than becoming tighter, is starting to unravel. Kress is still one of the best in the genre and the multi-reader narration brings the book to life in a remarkable way. Definitely worth a listen.