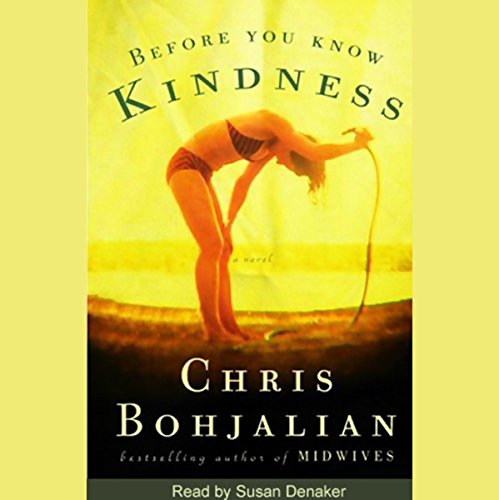 Before You Know Kindness

By: Chris Bohjalian
Narrated by: Susan Denaker
Try for £0.00

For 10 summers, the Seton family - all three generations - met at their country home in New England to spend a week together playing tennis, badminton, and golf, and savoring gin and tonics on the wraparound porch to celebrate the end of the season. In the 11th summer, everything changed. A hunting rifle with a single cartridge left in the chamber wound up in exactly the wrong hands at exactly the wrong time, and led to a nightmarish accident that put to the test the values that unite the family - and the convictions that just may pull it apart.

Before You Know Kindness is a family saga that is timely in its examination of some of the most important issues of our era, and timeless in its exploration of the strange and unexpected places where we find love. As he did with his earlier masterpiece, Midwives, Chris Bohjalian has written a novel that is rich with unforgettable characters - and absolutely riveting in its intensity.

"Chris Bohjalian’s many fans will be glad to know he’s back on the high wire, expertly balancing topical issues with the more timeless concerns of the human heart. His well-drawn, sympathetic characters deepen and intensify the novel’s gripping plot rather than simply serving it. Before You Know Kindness is smart, first-rate storytelling." (Richard Russo, winner of the Pulitzer Prize for Empire Falls)

"Once again, Chris Bohjalian dares to tackle the complexities - and complacencies - of modern society at its most vulnerable spot, where the personal clashes with the political, where the private is forced to go public. And once again, he forges a drama that will keep his readers on the edge of their seats...perhaps their conscience as well." (Julia Glass, winner of the National Book Award for Three Junes)

"Chris Bohjalian’s magnificent new novel, Before You Know Kindness, is the best work of fiction I’ve read about an American family since Amy Tan’s The Joy Luck Club. It is one of the funniest, best-written, most compassionate, most engaging, and flat-out most enjoyable novels I’ve ever read." (Howard Frank Mosher, winner of the New England Book Award for A Stranger in the Kingdom)

Also available as a Random House audiobook, a large print edition, and an ebook.

"Few writers can manipulate a plot with Bohjalian's grace and power." ( The New York Times Book Review)
"Bohjalian's elegant, refined writing makes even the most ordinary details of family life fascinating, and his characters leap off the pages as very real, flawed, but completely sympathetic human beings....A triumph." ( Booklist)

What listeners say about Before You Know Kindness

This is Chris Bohjalian as his best. It's like "Midwives" and "The Law of Similars" and "Buffalo Soldier" were just a warmup. He explores numerous aspects of an issue as seen through the characters and their history, their attitudes and their (often conflicting) situations. Such writing could easily become an intellectual exercise but Bohjalian's perceptive insights and dedicated, consistent character development makes this book a joy to read. I couldn't put it down.

Give it an hour or two to get rolling...

This book started off real slow, but got better after 1 - 2 hours... I am glad I hung in there, it was pretty good. A little too much detail in some spots, but overall a great "read".

This is a very rewarding novel that tackles the issues of gun control and animal rights so deftly and from so many points of view that you'll lose yourself in the inner workings of the characters and the plot, and not realize till you've finished reading it what the book is really about. The author leads you on a detailed journey through each characters inner and outer desires and motivations, interweaving story lines and perspectives seamlessly. If you liked "Behind the Scenes at the Museum" (Kate Atkinson) and "On Beauty" (Zadie Smith) you'll probably like this too.

Much like "The Kite Runner" (Khaled Hosseini) and "A Changed Man" (Francine Proset) there is also the theme of it never being to late to find redemtion, no matter the sins (real or imagined) commited.

This is a wonderful novel that stayed with me for a long time afterward. It lent itself (as I think all of Bohjalian's books do) to audio quite well. Bravo to audible for making an unabridged version available!

Mediocre is probably being kind... And let me say right off that I am a Chris Bohjalian fan. Midwives was a fabulous read. I enjoyed The Buffalo Soldier and The Double Bind. I was looking forward to "Before you know..." However I felt the prose was basic, the plot was linear with nothing surprising or out of the ordinary. This could easily have been told as a short story. He overused too many phrases, many times in the same paragraph. It was difficult to finish and I do not recommend it. Steer yourself to the other Bohjalian joys of reading and don't waste time with this one.

Wow. I can't believe I spent 2 credits for this book. I should have gotten the abridged version because this book was too long by half. The characters were not well-drawn and very dull. Patrick was probably my favorite character and that was because he was a baby and didn't do anything or say anything. The author went into excruciating detail on things that I just didn't care about. I kept wanting to tell him to get on with it! I finished it because it was for a book club. Even conversations with my fellow members didn't bring much clarity to this book. I don't think there was anything to clear up, it was just boring. I do know I'll steer clear of this author from now on.

Any diet is tough

Characters had character. A Simple story with a lot of statements. I liked the very notable ending, because it left me smiling. Very good coming of age story for all ages.

A good read, but Bohjalian has done better.

This book was so long and the beginning almost made me give up but continued.

It couldn't finish it

Would you try another book from Chris Bohjalian and/or Susan Denaker?

I found the performance lacking. Parts of the story were so over described for no apparent reason (ok, I get it, the guy worked in a seafood restaurant - I don't need a 20 minute description of how he killed lobsters)

Has Before You Know Kindness turned you off from other books in this genre?

The narrator had no inflection in her voice. It was like listening to an old lady who doesn't know what's an important part of the story vs. what's fluff. I found the reading very aggravating

Hardly a page turner, rather an interesting character study of a privileged segment of our culture when a near-miss challenges comfortable assumptions and the integrity of the characters who are committed to various degrees of politically correct fanaticism.