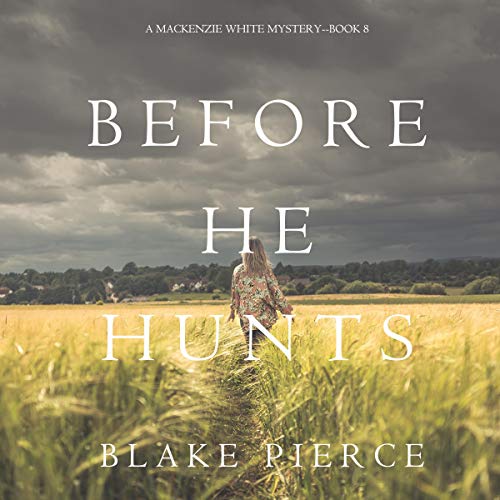 In Before He Hunts, victims are turning up dead in FBI Special Agent Mackenzie White’s home state of Nebraska - all shot in the back of the head, and all bearing the card “Barker Antiques.” The same card her father’s murderer left on his body years ago.

With a sudden urgency in the present, the time has finally come for Mackenzie to face her ghosts, to face her darkest past, and to find her father’s killer.

But her trip back down memory lane may take her to places she’d rather not see, and to discoveries she’d rather not find. She finds herself playing cat and mouse with a killer more sinister than she could imagine, and with her fragile psyche collapsing, this case, of all of them, may be the one that does her in for good.

A dark psychological thriller with heart-pounding suspense, Before He Hunts is book number eight in a riveting new series - with a beloved new character - that will leave you turning pages late into the night.

What listeners say about Before He Hunts

Superb story, shame about the narration

Sadly a change of Narrator

I have very much enjoyed books 1-7 and was looking forward to continuing but sadly the change of narrator has ruined the series for me. She was very hard to listen to and has completely changed the pace and characters of the book for me - such a shame.

Really need to stick with a good narrator

It is quite hard to stick with a story when a narrator change occurs midway the series. This narrator reads the story SOOO differently... it is so awkward tans difficult to maintain knowledge of the characters!! And while there is a coupling situation with characters, the book is a mystery- not erotica!!!! Already stopped one series due to the narrator change, this one might kill my interest in this one, too.

I love Blake Pierce novels, but this narrator was like nails on a chalkboard for me. Too dramatic

I really enjoy the Mackenzie White series. This book was wonderful. Keep me guessing the whole way through. I would have given it a 5 star but the reader left much to be desired.

Glad I toughed out the change is narrators.

at first, I was really upset bc the narrator is different. it is a close match, but different enough. character voices are different, word pronunciation, etc, but I got used to it. and boy am I glad I did! the ending is different than what we've come to expect in the Mackenzie White story. the ended was fantastic.

I have listened to many narrators reading Blake Pierce’s books but this Narrator I could not listen to and can’t not finish the series of these titles that she is reading. She reads as she is trying to be seductive and I can not stand another word. These are thrillers not seductive stories. I need to get my credit/money returned

Poor choice of narrator for this story.

I didn’t agree with the choice of narrator for the first 7 books (why an English accent? The main character is from Nebraska and works in DC?) but this new narrator is totally wrong for this story. Her voice is very nice and relaxing. This is not the story for this voice. She sounds like she is whispering and her voice trails off at the end of every sentence. I can’t even listen to it, I have to buy the book hard copy and read it that way.

glad to finally have reached the end of the mystery with her father. good stuff. the new narrator threw me off at first.

I was not able to finish this book. I couldn't stay focused due to the narrator's voice. Another reviewer mentioned the same problem...I agree with that reviewer completely. I guess I won't be finishing this series unfortunately.

I like Blake Pierce mysteries and have listened to Mackenzie White, Books 1-7; but I can’t concentrate on the story with this new narrator. She reads in a wispy, overly-dramatic voice, so I feel like I’m listening to golf on the radio. I’m sure her voice would go well with some stories, but not this one for me. I had to stop listening to the book, so my story rating is based on Pierce’s other stories.