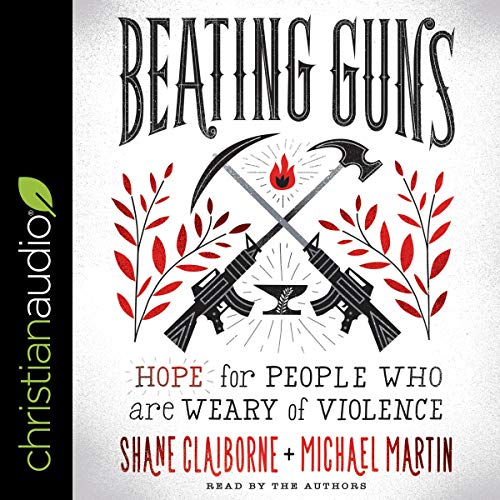 Parkland. Las Vegas. Dallas. Orlando. San Bernardino. Paris. Charleston. Sutherland Springs. Newtown. These cities are now known for the people who were shot and killed in them. More Americans have died from guns in the US in the last 50 years than in all the wars in American history. With less than five percent of the world's population, the people of the US own nearly half the world's guns. America also has the most annual gun deaths - homicide, suicide, and accidental gun deaths - at 105 per day, or more than 38,000 per year. Some people say it's a heart problem. Others say it's a gun problem. The authors of Beating Guns believe it's both.

This audiobook is for people who believe the world doesn't have to be this way. Inspired by the prophetic image of beating swords into plows, Beating Guns provides a provocative look at gun violence in America and offers a clarion call to change our hearts regarding one of the most significant moral issues of our time. Best-selling author, speaker, and activist Shane Claiborne and Michael Martin show why Christians should be concerned about gun violence and how they can be part of the solution. The authors transcend stale rhetoric and old debates about gun control to offer a creative and productive response. The audiobook shows how guns are being turned into tools and musical instruments across the nation. It conveys the mind-boggling realities of gun violence in America, but as the authors make clear, there is a story behind every statistic.

Beating Guns allows victims and perpetrators of gun violence to tell their own compelling stories, offering hope for change and helping us reimagine the world as one that turns from death to life, where swords become plows and guns are turned into garden tools.

What listeners say about Beating Guns

As a victim advocate, I deeply appreciate the messages in this book. While I may not agree 100% with the authors' opinions, I would still gladly recommend this book to colleagues.

So many things to learn about. All are welcome to the conversation. My life...your life...may depend on it. Hope filled. Authentic. The church of Jesus is rising up and the revolution will always look different than we’d expect. Hallelujah for that!

Every Christian Should Read This

I absolutely loved this book. This is an excellent follow up on Fight by Preston Sprinkle.
From a recording standpoint, the hand off between Shane and Michael’s voices throughout the book was jarring at the start, but after and hour or so I got used to it.
Truly a prophetic voice for this generation.