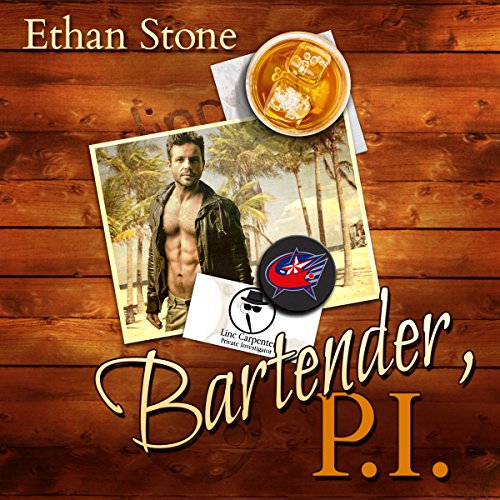 When hockey star Linc Carpenter is banned from playing his beloved sport, he starts over, slinging drinks in Tampa. He's inept as a bartender, so when the opportunity arises to train as a private investigator he takes it. He's not very good at that either, but he still manages to get hired to follow fashion mogul Quentin Faulkner.

Linc's incompetence is a hindrance, but Brady Williams, Faulkner's studly bodyguard, may prove to be his undoing. Brady is drawn to Linc despite his bungling, and Linc's stupidity may be just what's needed to solve the case and save their lives.

Second edition. A scene of approximately 2,000 words was added.

What listeners say about Bartender, P.I.

Funny--if that's how you roll

The humour in this story is based on stupidity and malapropisms. While I love a bit of stupidity, this kind wasn't really my thing. However, some of the malapropisms were hilarious--and so apt.

This was a vehicle for humour so don't expect much in the way of story-line or chemistry. The narration was done by a voice actor not just someone who reads.

This was a super engaging and interesting. I had so much fun reading this one. John Solo did a great delivery on the narration. Overall a lighthearted and fun read!

Looking for a good fun time, try this one

This book is hilarious, it truly will have you giggling. You will also find yourself talking back to your audio.

The book description is right on point. We have our not very competent yet extremely likable Linc who is kind of trying to find his next career after being banned from hockey. The things that come out of this guys mouth would have you turning your head in public saying "what the" but not in an offensive way. This book is not sexy, not intense and doesn't have to be categorized as a gay audiobook because it is just a good fun time with gay men involved. It is worth the money and is the 2nd Ethan Stone audio I have. Buy "In the Flesh" if you would like a better more involved listen from this author. You will listen to both of these more then once. Good job to John Solo for his narrating our wacky Linc, he does a good job on the other voices too.

This is nothing I expected and everything I wanted. It is bizarre, hilarious, and highly entertaining. My head is still spinning and I have a huge stupid smile on my face. A must listen. I loved every crazy minute. I voluntarily listened to a free copy of this and am giving an honest review. The narrator did an excellent job bringing the characters and story to life. Amazing!!!

I admit, I only got through three chapters before I gave up and returned it. This might be someone’s else’s jam but not mine. Was hoping for a good story but this came off as drunken bragging by a character who was never going to grow up. He never clicked as relatable. Lots of eye rolling, very little plot development. Hard pass for me.

the story is cute if not a little bit out there. the story is all giggle and fuzzy feels but no heat. worth a quick listen if your in the mood for light and flirty

I laughed through the entire thing! Link is so earnest and adorable. Love love love

My stomach hurts from laughing so much!

This was the first book from this author and narrator I have read/listened to. I was looking for a good laugh, and boy did I find it. I don’t know how the narrator could deliver so well and not crack up himself.

I couldn't get into it

The story was good, but I just couldn't get into it. Maybe it was the dry humor, or sex on the first page, or the narrator. I might come back to it as an ebook, but it's iffy. The narrator had some strange sounding voices for the secondary characters, and was a little too silly for the MC.

Comedic But Not For Me

This was a silly, slapstick romance. A comedy of errors that was too farfetched for me to truly enjoy. There were some sweet and funny moments, but overall it was not my humor.

Brady Williams, the body guard to fashion designer Quentin Faulkner, turned out to be one of the more interesting characters in the audiobook, although it’s Linc Carpenter’s bumbling PI efforts and malapropisms that lend the humor to the story.

If you’re looking to be entertained with some funny fluff for a few hours on a rainy afternoon, this could well be the story to satisfy your needs.