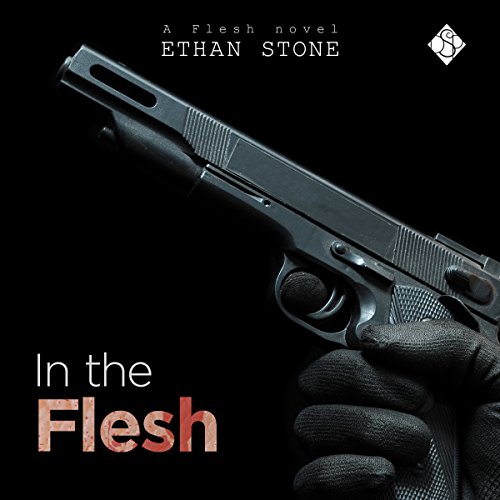 By: Ethan Stone
Narrated by: Tristan James
Try for £0.00

Leave it to handsome lawyer Colby Maddox to save Cristian's life. He takes the case and the attraction between them is quick and undeniable. After several passion-filled encounters with Colby, Cristian unexpectedly wants to break all his rules. However, before they can contemplate a future together, they'll have to clear Cristian's name and find the real murderer.

What listeners say about In the Flesh

I read the ebook a while back and when I saw this on audio I had to grab a copy. Loved the narration. It brought the story to life all over again. Thank you to the author and narrator.

Well, folks, I'm in the minority again with this one. I disliked the story and the only reason I kept going with it was because Tristan James does a good job with the narration.

When televangelist, Joseph Pryor, is stabbed nearly to death Cristian and his partner, Lex, are assigned to the case and it creates a snowball effect of connected events that eventually get Cristian framed for a related murder. Eventually his partner Lex hires lawyer Colby Maddox to save Cristian and the two work together to get Cristian free.

Once he's out from behind the charges, he continues to investigate the other mysteries that mount up until he finally gets all the answers.

I honestly cannot remember reading a story where a character who is supposed to be so smart and capable is so egregiously stupid and short-sighted in his actions. Cristian misses obvious clues, ignores evidence, at one point refuses to hire a capable defense attorney instead initially going with a Public Defender because "he's innocent", screws around at every opportunity, including having sex with a suspect, regardless of any consequences.

But then Cristian meets Colby and everything changes. Colby is rich, handsome and hung. So, of course, Cristian begins breaking all his carefully crafted rules once they begin having sex. Unfortunately, Colby is also deeply closeted with no intention of coming out any time soon, even for Cristian. And there are still mysteries to solve.

It all just didn't add up for me. I didn't like Cristian's decisions and actions, some being so over the top stupid it had me literally pulling my hair at times in frustration. I got really tired, really quickly of all the completely unnecessary sex in this story. There is just so much sex in this story...to the point it frankly got repetitive and boring for me to keep hearing.

I did like how it transitions from straight mystery to mystery with some romance as the story progresses and Colby is introduced, but found the writing style just didn't work for me as a whole. I didn't buy into Cristian's reasons for his behavior, and explanations came too little too late for me. I also didn't feel like I got to know Colby enough to buy Cristian changing all his ways for him so they could have their HEA.

Even though the audio contains my biggest pet peeve with M/M narration (when the narrator mistakenly says "prostrate" instead of "prostate"), I enjoyed Tristan James's narration overall and thought he did well with the various character voices in the story. Like I said before, the only reason I kept going with the story was directly because Tristan James does such a good job with the narration.

BUT! Like I also said at the beginning I am definitely in the minority with disliking this one.

If you're looking for a mystery with strong characters, lots of hot sex, and some romance then you should check it out for yourself.

Here's one you will listen to more than once

This was a surprise find and a nicely paced book. I have to admit I followed one of my favorite narrators Tristan James to this book, but really like Ethan Stones writing. It's a good story built around the private and sometimes public sex world our main character is involved in.

We find our young, out and proud Detective Flesh has allowed his libido to get him into a mess. He is likable but not loved by all, smart but not brilliant, attractive but not drop dead gorgeous. He's a good cop but not a super cop. He is hot though and has a lot of sex with men and it's hot sex he enjoys but he still sticks to his own set of rules with no regrets. Thanks to attorney Colby Maddox who cruises in with his easy confidence, expensive clothes and cologne and has Flesh seeing things in a whole new light. He brings things to the table Flesh didn't think he wanted. These guys generate serious heat when their together. Unfortunately his attorney doesn't seem to be out and proud, "is he even gay".

There is a good variety of locations in this book, from sex clubs, camp grounds, restaurants, work events, movie theaters. The guys friendship just flows well from the start. The supporting cast are good too. Nice job to the author. Write more like this and you will have a faithful following. And you can never go wrong with James narrating.

So I have a huge personal hang up, and this book/audio hit it.

Cristian is portrayed as this bad-ass, tough as nails police officer, but in the bedroom is a total wimp, slut, likes to be pushed around almost to the point of abusive. I get it, this is a sex game to him, but the words he is called and the actions, and the two very different roles, I just can’t wrap my head around it, never can. Not just this tale, but anytime I read/listen it to from any author. And for the first half of this book or so, we get a lot of graphic flash backs of this MC’s past with another characters in the book. To the point that I FF through those sections.

Luckily, the second half of the book, we get to the case, the relationship with Colby, who is the positive side to Cristian not so positive past, any part.

The bits we get of Cristian past, doesn’t paint a great picture, lots of abusive, sexual and well as physical. But somehow he has managed to raise above and become this bad – ass super young detective. Who lands a case, that involves one of his sex buddies.

Colby is brought when Cristian is arrested in connection to a theft and death.

This story is intense and well done. Lots of players, lots action, lots of plot.

Colby and Cristian in the second part are so good together, Colby is exactly what he needs. A loving hand, for his dark world.

I just wish I could get get past the images of the first part.

Narrator did a wonderful job of bringing a very powerful and at times upsetting story to focus.

I truly enjoyed this cop/lawyer tale of mystery, betrayal, action, and romance. I always predicate an author who creates a diverse cast of characters in culture and races. Some of the characters made really dumb decisions but the overall all story was entertaining and I'm hoping for more stories with Colby and Flesh.

Tristan james is fantastic! the Storey was hot!!!! width they'd make a movie out of it!

This was the first book I've listened to by Ethan Stone. I enjoyed this story. The romantic scenes with Christian and Colby were intense and hot! I'm looking forward to the next In the Flesh audible novel.😄

Christian Flesh is an out and proud gay cop who finds himself being framed for murder. He's quite the slut preferring one night stands and quickies to having any real relationship with anyone. To protect himself in this he has a set of rules he lives by such as "No kissing". Along comes his new lawyer, Colby who is a closeted gay man and Christian finds himself slowly breaking rule after rule. At first I didn't really like Christian, he was pretty self-centered and pretty much admitted he enjoyed being a slut and was proud of this. As the relationship with Colby begins to get more intense however we find Christian slowly thawing out to the point where we start seeing his good side. Because of some past hurts he has protected himself with his initial personna but through Colby he begins to learn to trust and how to love. The big problem however is that he is the suspect in a murder case that stands between him and Colby's relationship. The other problem they must work to overcome is the fact that Colby is not ready to come out as gay which makes no sense to Christian. This was an enjoyable read, The characters are well developed and the plot held my attention throughout the entire book. I would rate it four out of five stars due to the fact that it took a while to warm up to Christian.

It was really good

What made the experience of listening to In the Flesh the most enjoyable?

The narration was superb.

What was one of the most memorable moments of In the Flesh?

I liked that Flesch was a bottom 😘

His was a spot on narration for him , exellent.

If you could rename In the Flesh, what would you call it?

This story is worth listening to.

The narration is wonderful bring the story to life

This is a very valuable and useful audible

I really enjoyed this story of suspense, revenge, action and romance from cop / lawyer. I still recommend an author who produces a diverse cultural and ethnic cast of characters. Some of the characters made really stupid choices but the whole story was entertaining overall and I'm hoping for more stories with Colby and Flesh.