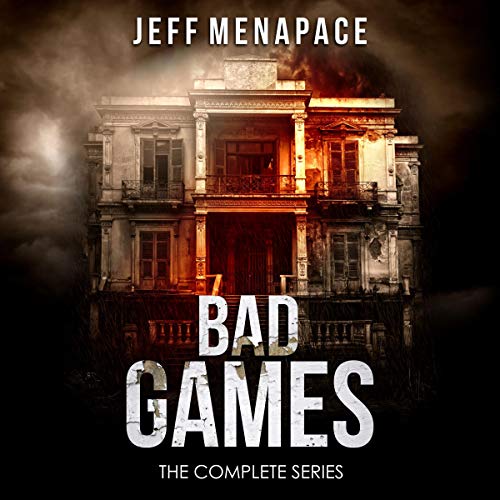 By: Jeff Menapace
Narrated by: Gary Tiedemann
Try for £0.00

You asked for it, it's here. All five books in the critically acclaimed Bad Games series under one terrifying roof. Bad Games: The Complete Series includes:

Bad Games: The terrifying best seller that started it all.

The Lambert Family is heading to Crescent Lake, a rural cabin community in Western Pennsylvania, for an idyllic weekend getaway. Some fishing, some barbecue, some games...

The Fannelli brothers are heading to Crescent Lake too. Some stalking, some kidnapping, some murder, and definitely some games...though not necessarily the type of games the Lamberts had in mind. But it doesn't matter. The Lamberts are going to play whether they like it or not.

However, the game is far from over. There are some new players in town. Players who have close ties to the Fannelli brothers. Players who are taking things very personally...and promising results that are very deadly.

Hellbent: A year has passed. Marine and security specialist Domino Taylor shadows the Lambert family, the guilt he feels for the tragic events that unfolded in Western Pennsylvania haunting him without mercy.

When someone from Domino's past contacts him, begging for his help, Domino reluctantly agrees, not knowing the sinister truth lying in wait: There is one final game yet to play.

Malevolent: After years of silence, the game is back on. Widower Allan Brown is hosting a support group in his home for the bereaved. One of the guests in attendance will be Amy Lambert, this week marking the five-year anniversary of her family’s horrifying ordeal at Crescent Lake.

Of course, it’s hardly cause for celebration. Still, some unwanted guests plan on attending the support group to help Amy celebrate all the same....

Psychopath: A decade has passed. Caleb’s increasingly violent temper sees him discharged from the Marine Corps. Carrie is failing at her second attempt at college. Aftermath, it would seem, plays the cruelest game of all.

The only plus is Amy Lambert's success as a best-selling author, chronicling her family’s horrific ordeals over the years. But is it a success? It has brought some unwanted attention Amy’s way. Two fledgling killers who happen to idolize the late and infamous serial killers Arty and Jim Fannelli have been paying attention and these two killers are eager to show the Lamberts just how much they truly admire their idols...with the help of Arty and Jim themselves?

Find out how such a horrifying prospect comes to fruition in the fifth and final book in the series, and prepare yourself for the game to end all games.

What listeners say about Bad Games: The Complete Series

I finished this 36+ hour series in less than a week and now i don't know what to do with myself. AMAZING series, Jeff M never dissapoints!

I thoroughly enjoyed listening to this audiobook and reading this book at the same time. The first few pages had me hooked and since then I listened & read the whole 5 books stopping only once to read another book and give myself a rest but it pulled me back into it to see how the family were and what was round the corner.

The author done an amazing job with the suspense in each book and kept you wondering who was going to try and kill the family next, book 5 was a decent twist with the characters and it didn’t disappoint.

Highly recommend the whole collection, I only listened and read these as I wanted to try a new genre, will be keeping an eye on this authors work !

Brilliant, simply brilliant!! What a story teller, with just a hint of the psychopath!! Loved it...

what a bargain 5 books for one credit, the first book alone was worth it . excellent first four books the last one maybe a book too far but still a good story

I absolutely 💯 Loved this series great story really love Jim & Artie there psychotic wit made me giggle 🤭 Gary Tiedemann narration was 2nd to none this kept me hooked from book 1 though 5. Thank you Jeff Menapace for a great set of books. AAA+++

I stumbled upon this collection almost by accident, which is fitting for a series that begins with a chance encounter. The story follows the trajectory of a family targeted by a pair of serial killers; each installment somehow managing to up the ante. The content is certainly pretty dark and twisted, but the author has a great talent for balancing this with humour and the whole series makes for a compelling listen. I don’t recall the last time I ploughed through thirty-six hours of audio books in such a short period. The author has a wonderfully witty and wry style with some great observations of human nature and behaviour. The narrator also proves to be one of the rock stars of Audible and does a fantastic job of bringing the characters to life. An inspired choice for this series. The fact that this whole series is available for a single credit, makes this an absolute no-brainer. Possibly not recommended for those with a weak stomach though!

absolutely brilliant from start to finish

omg I have never been so grateful. brilliant read, kept me intrigued all the way through. thank you Jeff and Gary would recommend this as 1st time crime reader xx

I had previously read the first book in this series, and I liked it so much that when starting this nearly 40 hour long collection, I happily opted to listen to book 1 for a second time. The characters that Menapace has dreamed up here are so delightful while simultaneously being realistically obnoxious and totally human. The relationship between Patrick and Amy is sweet, but not in a way that makes me want to retch, which is a balance that is hard to strike.

I could dig into each of the 5 books separately but I really don't think it's necessary. While the first one holds a special place in my heart, all of the books in this series are exceptionally strong and manage to not be repeats of the previous books. Menapace does a superb job of keeping me entertained, emotionally involved, and hungry for more throughout the duration of the series.

Gary Tiedemann's performance rivals Menapace's writing for first place in excellence here, though. Tiedemann is able to voice women, children, maniacs, old people, etc in a manner that made me forget that there wasn't a full cast behind this production. It's easy to voice women and children poorly and Tiedemann is a truly shining example of what to strive for when narrating thrillers.

I would recommend this series to absolutely anyone who enjoys a good mystery/action/thriller genre story.

I was unable to finish even the first book. Way too much foul language.

honestly I could of kept going

this series, I don't know what to say it was everything that I was looking for. I love the horrid detail put into the gory scenes. def my style.

Patrick Lambert, his Wife, Amy and two small children we're heading to a cabin in the woods on a lake. They were out for a peaceful weekend from the hectic hustle and bustle of city life. They wanted to spend quality time with each other.

When they stopped for fuel, Patrick met a man who introduced himself as Artie. During a conversation with him, he learned they had both were graduates of Penn State. Patrick told Artie told he and his family were on the way to Crescent Lake for the weekend. Artie said he was also going there later to meet meet his Wife and her parents at their cabin, or did he have other plans?

This series of of books books are for the mature and not for the weak at heart or for children.

Loved it! I hope there are storyline added to this series. Highly recommend this book.

Down Right Will Scare You to Shake!!

I read the first book of this series and remember that it scared me, but that it was a good book. When it appeared in Audiobook Boom as the whole series I decided to give it a try. This genre of reading is too scary for me, but would highly recommend to all of you Fright lovers! I was given this book by the author for a truthful review.

I have read a lot of books and series, but honestly, this was the best! This is the first time I have read Jeff Menapace and it certainly won’t be the last!!!!! Kept me on the edge of my seat. I wish it didn’t have to end. This would be a fantastic series to make into movies!!!!

I wish it was another 40 hours longer. One of the best thriller series I’ve found. The high school kids easily taking out a marine parts are a little silly but you have that sometimes. All and all I loved it

I cannot praise Jeff Menapace enough for his amazing ability to get into your head and stay there! This series is so good I’ve read it in its entirety 4 times. It’s original and keeps you on the edge of your seat. His incredible writing accompanied by Gary Tiedemann narrating is a PERFECT MATCH MADE IN HEAVEN! If you haven’t bought this and everything else Jeff Menapace has written you are missing out BIGTIME.