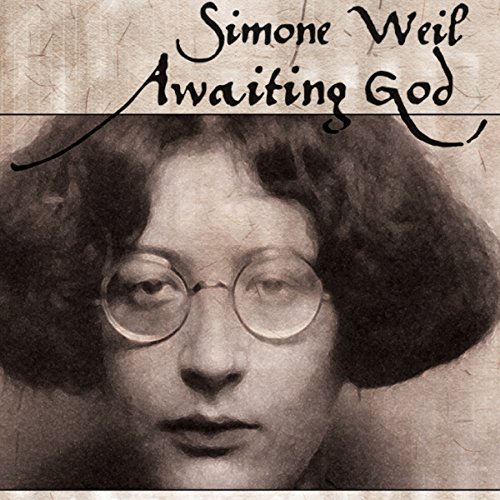 A New Translation of Attente De Dieu and Lettre a Un Religieux
By: Simone Weil
Narrated by: Rosemary Benson
Length: 8 hrs and 28 mins
Categories: Non-fiction, Politics
5 out of 5 stars 5.0 (6 ratings)

Awaiting God combines a fresh translation of Simone Weil's Waiting for God and Letter to a Priest Attente de Dieu and Lettre un Religieux in one volume.

These works are considered Weil's primary essays and letters. In addition, Simone Weil's niece has contributed an introductory article entitled, 'Simone Weil and the Rabbi's: Compassion and Tsedekah,' which puts Weil's relationship with Jewish thought into perspective. She includes source material from the Rabbis that put Weil (however reluctantly) in line with rabbinical thought throughout her major themes. The book is the ideal English introduction to the works and thought of Simone Weil, including important preface material (by Jersak) on how to read her work, as well as her relationship to Roman Catholicism and Judaism.

I can only think of Sir Roger Scruton who has been able to come close to describing "Beauty" as well as this book manages to do. Weil shows a keen insight on human nature and the struggle for us to find our place in the world. As an atheist, the religious slant was in no way off putting. The poetic application of the relationship between "God" and mankind is well explained in this work. Finally a word on the narration - Excellent.

There is a sadness in Weil's writing and at the same time positively awe inspiring.

Beautifully narrated which speaks to the bitter sweetness of Weil.

You Speak Weil - And Do Not Know So

If you could sum up Awaiting God in three words, what would they be?

Sylvie Weil's defense of Judaism is filled with the voice of the Talmud. She goes after her Aunt Simone with all vigor. The Introduction is nothing but an apologetic on behalf of Judaism, and it works. Part of Simone Weil's attraction is her complicated religious journey: European Jew, near Catholic, and Mystic.

Benson's voice is very listenable for me. It is believable, and perhaps more feminine than Weil's own voice deserves. But it is clear and firm without the sufferable cadence often found in readers of philosophy who must meter their reading in order to get through the material.

Brad Jerzak's translator leaf reveals a personal encounter with Weil. "She must be read, not talked about." Agreed.

I had to buy the book. There is too much gold here. Weil's work influenced Vatican II, is read by Popes and hipster neo-evangelicals alike. Contrary to all the uber-speak of the 19th century, Weil answers with a post-modern voice of self-sacrifice and determination that challenges the dogma of the 20th century and all that went wrong with positivistic idealism. Her voice is the sane voice, the voice from below - and hardly anyone can live up to it. If you need an accessible Christian mystic, then Weil is your good read. Now if only Christians and secularist alike would do as she says.

Nope, not for me.

What was it my grand mother used to say? Claptrap. The ramblings and gibberish of the functionally insane. I didn't care for the narrator's voice either.