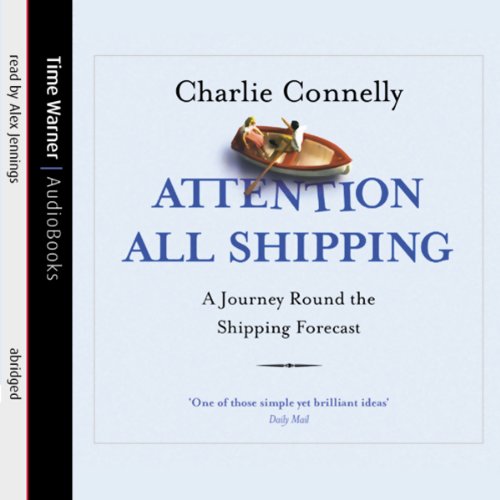 By: Charlie Connelly
Narrated by: Alex Jennings
Try for £0.00

The solemn, rhythmic intonation of the shipping forecast on BBC radio is as familiar as the sound of Big Ben chiming the hour. Since its first broadcast in the 1920s, it has inspired poems, songs, and novels, in addition to its intended objective of warning generations of seafarers of impending storms and gales. In Attention All Shipping, Charlie Connelly wittily explores the places behind the voice, those mysterious regions whose names seem often to bear no relation to conventional geography.
©2004 Charlie Connelly (P)2007 Hachette
Engineering Sailing Travel Writing & Commentary
Show More Show Less

"A wonderfully eccentric study." ( Observer)
"An engaging and often very funny book." ( Sunday Times)
"One of those simple yet brilliant ideas." ( Daily Mail)
"If listening to Sailing By to the bitter end every night is the surest sign of a Radio 4 addict, then buying Charlie Connelly's new travel book runs it close." ( Independent on Sunday)

What listeners say about Attention All Shipping

Absolutely loved the story and was spoken with humour. strongly recommend. A must listen over and over again

This journey through virtually all of the forecasts sea areas is both informative and full of entertaining anecdotes. Giving real insight into the origins of each sea area while painting a colourful picture of life there in the present.