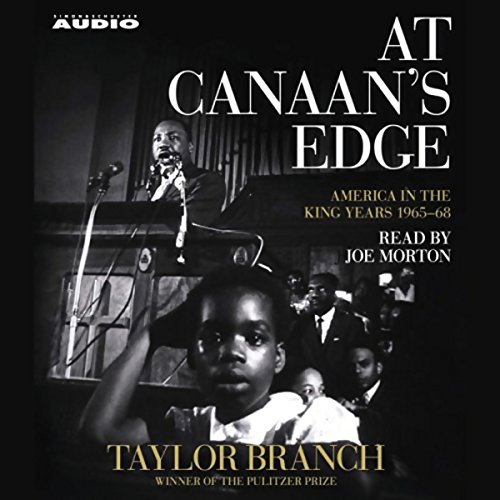 At Canaan's Edge concludes America in the King Years, a three-volume history that will endure as a masterpiece of storytelling on American race, violence, and democracy. Pulitzer Prize-winner and best-selling author Taylor Branch makes clear in this magisterial account of the civil rights movement that Martin Luther King, Jr., earned a place next to James Madison and Abraham Lincoln in the pantheon of American history.

In At Canaan's Edge, King and his movement stand at the zenith of America's defining story, one decade into an epic struggle for the promises of democracy. Branch opens with the authorities' violent suppression of a voting-rights march in Alabama on March 7, 1965. The quest to cross Selma's Edmund Pettus Bridge engages the conscience of the world, strains the civil rights coalition, and embroils King in negotiations with all three branches of the U.S. government.

The marches from Selma coincide with the first landing of large U.S. combat units in South Vietnam. The escalation of the war severs the cooperation of King and President Lyndon Johnson after a collaboration that culminated in the landmark 1965 Voting Rights Act.

At Canaan's Edge portrays King at the height of his moral power even as his worldly power is waning. It shows why his fidelity to freedom and nonviolence makes him a defining figure long beyond his brilliant life and violent end.

What listeners say about At Canaan's Edge

I listened to unabridged versions of the first two volumes of this work and loved every word. This was got very confusing and I missed the detail. I have the book and I guess I'll have to read it. Never again will I try abridged versions.

I’ve both read and listened to both of the previous volumes in this trilogy and this is atrocious. It is even worse that customers are not notified that this is an abridgment except in small print.

This is a tremendous trilogy. That takes you through the story of MLK and the civil rights movement. A terrific audiobook.