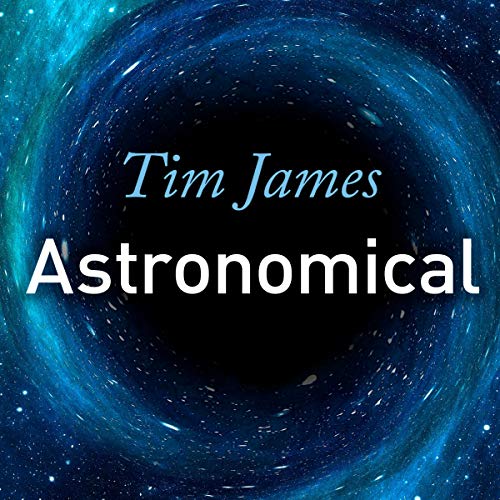 Does the big bang prove the existence of God? What's the universe expanding into? Is Earth the only planet which supports life? Why did the greatest astronomer in history murder his pet moose?

Space is the biggest, oldest, hottest, coldest, strangest thing a human can study. It's no surprise then, that the weirdest facts in science (not to mention the weirdest scientists themselves) are found in astrophysics and cosmology.

If you're looking for instructions on how to set up your grandad's telescope this book probably isn't for you. In Astronomical, Tim James takes us on a tour of the known (and unknown) universe, focusing on the most mind-boggling stuff we've come across, as well as unpacking the latest theories about what's really going on out there.

Guiding us through Einstein's relativity, quantum mechanics and string theory, Astronomical delves into the baffling corners of the cosmos and tackles the biggest mysteries we face: from alien life to the zodiac, from white holes to wormholes, from quasars to quark stars. This is the science of space at its absolute strangest!

From the creation of the universe out of nothing to the Large Hadron Collider and the universe's ongoing expansion, Tim explores our planetary neighbours, where it snows metal on Venus, there are underground lakes on Mars and rivers of petrol on Titan.

He then looks beyond our solar system: to exoplanets which could support life, rogue planets, quark stars, quasars, neutron stars and more. Tim looks at black holes (and how to survive in one), wormholes, white holes as well as dark energy, dark matter and even a bit of string theory thrown in for good measure. He explains the search for extra-terrestrial intelligence, including the discovery of Martian fossils in the Alan Hills meteorite and the tantalising 'Wow signal' transmission earth received in 1973 - still unexplained.

He also rebuts resurgent anti-science movements, including the Flat Earth Society and discusses what's really going on inside Area 51.

To close, Tim finishes by looking at human achievements in space including how rockets work, how faster-than-light warp-drives (currently being investigated by NASA) work and how we plan to colonise both the moon and Mars.

"In the same light-heartedly informative spirit as his previous, Elemental, Tim James gives us an entertaining gallop through light years of space science, from the big bang to UFOs." (Andrew Crumey, author of The Great Chain of Unbeing)

What listeners say about Astronomical

I have been looking to read/listen to at least one of the several books written by Tim James predating the release of his first book being published (Elemental). I found myself pleasantly impressed but not surprised to experience the dedicated efforts Tim James put's into science communication once again; the book is well written and articulated in such a way that it is fully comprehensible for a range of people with varying levels of "scientific understanding".

This book is at the peak of what science communication should look to achieve for a broad audience and I hope Tim James continues to inspire people!

Great, one of the best I've listened to

Story is really nice and the author sure knows how to keep things interesting. Also, he, keeps things as accesible as possible, the duration of the chapters is perfect considering the topic, while the naration - I think that's one of the few books that is really more worth listening to than reading.

Kudos, will be heading to another Tim James book. Actually the first time I go for the same author with a 2nd book.

Loved this book. The is a fun book, narrated perfectly by the author. Would highly recommend.

It is a nice little listen for anyone starting in physics and wants to know a little about the basic workings of nature. Tim is easily understood and puts a bit of play in whenever there can be any.

An entertaining listen wonderfully read by the author. Full of interesting facts. Will check out Tim James other books.

Really enjoyed this.Full of information which Tim James gets over in a witty and entertaining manner.

A stellar guide to the universe!

Enthusiastically narrated, scientific yet funny and full of quirky random facts! It's not often you can laugh out loud to a book of this genre but I did several times. The only downside is that being an audible book, you miss out on the author's excellent hand drawn diagrams.

full of really cool content but isn't tough to understand at all. held my attention all the way through.

One of the best boos I have listened to.

You will be learning and be entertained. makes the subject funn. Great for people just learning about Astronomy ang Physics.

Some of the information I already knew; some was new to me. Very well presented. I thought Mr,. James’ English accent would be an issue for me. Nope, I understood him clearly throughout the audiobook.

His explanation of life forms and aliens was both comical and informative.

Tim, you are an inspired writer but an even more inspired narrator. Please, please, please always narrate your own books!