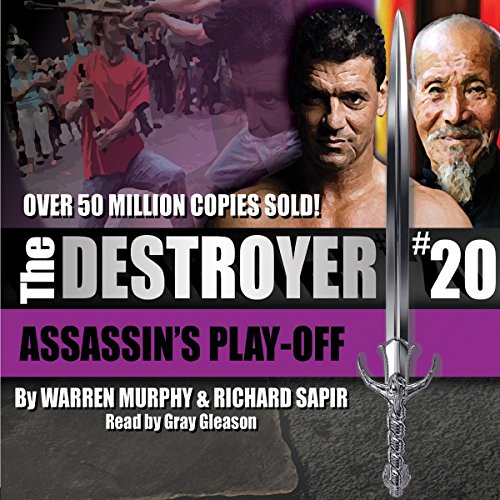 After a brutal fight in the streets of New Jersey, Remo and Chiun find themselves in battle after battle. Their archenemy and fellow assassin, the Maestro of Mayhem known as Nuihc, is hoping to knock out his competition. It all comes to a boil in Chiun's hometown in North Korea as the Destroyer finds himself in a fight to the death.

Chuin is awesome, Remo stands out

Hero of Thera made me nostalgic for one of my favorite series of all time, and that is Warren Murphy’s The Destroyer. You may have seen the one film based off the series, Remo Williams, the Adventure begins with Fred Ward, or even the failed TV pilot that starred Roddy McDowell of Planet of the Apes and Fright Night fame, and while I love both of them they are to the Destroyer series what every other martial art is to Sinanju, pale comparisons. Shadows made from the light.

For those of you who don’t know the book series is about a secret governmental organization that actually does its job, and takes out enemies of the united states, criminals, and all around bad guys. Sometimes this is something simple like stopping a war, or fighting a vampire. You never know. The organization is called CURE and they have contracted the master of sinanju to train a recruit in the ways of the one true martial art. Remo and Chuin, the master, eventually bond as master and student although they never really seem to get along. The books are fun, lighthearted, pulpy, and quickly completed. These are 70’s serial books that were put out every few months, which makes me think of authors and Amazon today. Also, they do have a semi-lit feel to them as Remo is constantly leveling up his powers, but the truth of the matter this is the first Wuxia stuff back before there was Wuxia.

Assassin’s Play off completes a series of encounters between Remo and a former student, and actual nephew of Chuin. Honestly, if you haven’t read any of the prior books you might be a little lost as most of the pairs powers and abilities aren’t showcased. They are often alluded to, or seen in quick brief strikes, but overall you never really get to see them doing all the amazing things they do in practically every other novel. A huge majority of the novels are on Kindle, but only a handful are on audible and I don’t know why.

If you do decide to check out this series, start at book three or four, the first few novels were where Murphy and Sapir were still finding their character’s way, and they didn’t know if it was going to just be a James Bond kung fu type adventure or something more, but book three and then four really cement the storyline and the adventure, as the movie tagline suggests, begins.

Now, some warnings. These books were written in the 70’s and up and so carry a lot of overtones that some people might find offensive. For example, the term Oriental is consistently used in lieu of the word Asian, the books are pretty sexist and promote male superiority for the most part, but there are some severely kick ass female characters that show up from time to time. If you can’t overlook that then skip it, but the story is just as worthy as you’d hope. It is complete pulp and nothing but fun and fights, cool martial arts actions, and father son relationship dynamics that are just hilarious.

Gray Gleason is absolutely amazing and there are some great sound effects and sadly, these are the only books that he has done. He really should be doing more audio, and if I were an up and coming author I would have my eye on this dude. While Audible does not have a lot of Destroyer stuff, Graphic Audio does have quite a few CD format Destroyer tales to pick from, but they are all the older books, the ones after the 100th novel, yeah there are that many books out there because they are so sweet.

My only caution is that this isn’t the book to break in on the Destroyer, as it really doesn’t explain a lot and you don’t see the skill sets that they have like you should. However, I do recommend the series on kindle or the new series they started called Forgotten Son. Either way, this is one of the most cherished series I have read, and like a say that if you are a Wuxia fan then this would be perfect for you. Give it a look.

I loved the story and the voice actors were great. Please add more of The Destroyer book series to Audiobook's store.

For the love of all that is holy please do more

Love this series have since I was a teen please please please do more, Gray Gleason does a great job of bringing the characters to life and the pacing is great, they can kill the some of the audio special effects but otherwise did a great job with a great series.

loved it,i would love more ,the only thing i dont like is when it ends.