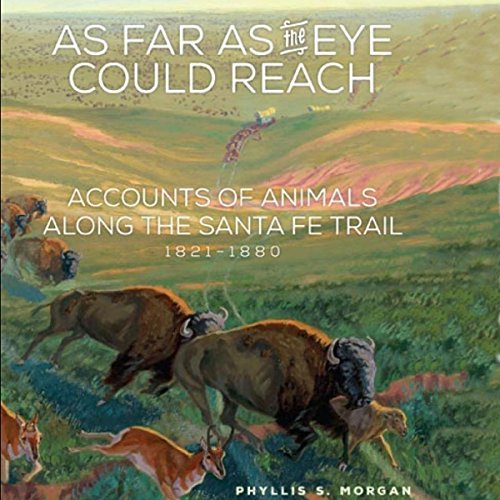 As Far as the Eye Could Reach

As Far as the Eye Could Reach

Travelers and traders taking the Santa Fe Trail's routes from Missouri to New Mexico wrote vivid eyewitness accounts of the diverse and abundant wildlife encountered as they crossed arid plains, high desert, and rugged mountains. Most astonishing to these observers were the incredible numbers of animals, many they had not seen before - buffalo, antelope (pronghorn), prairie dogs, roadrunners, mustangs, grizzlies, and others. They also wrote about the domesticated animals they brought with them, including oxen, mules, horses, and dogs. Their letters, diaries, and memoirs open a window onto an animal world on the plains seen by few people other than the Plains Indians who had lived there for thousands of years. Phyllis S. Morgan has gleaned accounts from numerous primary sources and assembled them into a delightfully informative narrative. She has also explored the lives of the various species, and in this book tells about their behaviors and characteristics, the social relations within and between species, their relationships with humans, and their contributions to the environment and humankind.

“Significant and finely crafted study of the animals and human-animal relationships on the historic Road to Santa Fe… It deserves a wide audience.” (Leo E. Oliva, author of Soldiers on the Santa Fe Trail)
“Provides eyewitness accounts rich in colorful detail and fascinating anecdotes… a welcome addition to the literature on the historic trails of the Old West." (Deborah Lawrence, coauthor of Writing the Trails)

What listeners say about As Far as the Eye Could Reach

I will listen to this book again and again.

It provided a fascinating glimpse into the history of the Santa Fe Trail and the animal inhabitants.

I was deeply touched by the suffering of the animals at the hands of mankind. I wish we had moved on from these days, but sadly humans don't seem to learn.

Being from the UK I had little knowledge of this area of the US and only a cursory knowledge of many of the animals mentioned. There is a wealth of information and I shall certainly be listening to the book again, and recommending it to others that have an interest in the wildlife of the US.

This book was a perfect companion to our road trip through the central prairie. We learned not only about the vastness of the native animals at the time of the Santa Fe trail, but also about the lives of those who witnessed this then prestine setting.

What was one of the most memorable moments of As Far as the Eye Could Reach?

There were many. The unique animals that came across the trail such as roadrunners, coyotes, and rattlesnakes made for an interesting listen, along with the stories and experiences associated with them. The narratives were enjoyable and thought provoking.

She did a great job. It's not an easy task to tell a historic story on animals in an audiobook. She made it exciting and fun to listen.

Loved the story that was told here. I was fascinated by the accounts of the exploration. The culinary attempts on various animals. What was sent back to the president and the amazing tidbits of first hand accounts especially those involving the rattlesnakes. The drawback for me here was the narration. It was very dry for me. There was no emotion to help carry the facts to me and made it for difficult listening. Optimum speed of 1.25x. I received this audiobook from the author narrator or publisher for free via audiobookboom in exchange for an unbiased review

A Wonderful Accounting of Animals on the Santa Fe

"As Far as the Eye Could Reach" was a terrific listen. It's about the western migration on the Santa Fe trail and the animals that the people encountered and documented. The book talks about the behavior of abundant animals in their environment, and included were a few narratives from the people who journaled this. The different animals were buffalo or bison, pronghorn or antelope, prairie dogs, the gray wolf, coyotes and roadrunners, prairie chickens, rattlesnakes, grizzly and black bear, wild mustang and then in part two it discusses domesticated animals such as mules, donkeys, burros, horses, and dogs. There was even a word said about cats who don't and didn't travel well.

I found this audiobook written by Phyllis S. Morgan to be most fascinating and informative. It was a thoroughly enjoyable listen but I also feel the take away for me was that I learned some new things that I didn't know which is always a bonus. I think one of my favorite chapters was the one about coyotes and roadrunners. I liked the Native American history of these animals. Also, a few of the stories I liked were the one about James Josiah Webb and his mule named Dolly Spanker. That was neat. I also liked the one of Simmons and his burro named Taco.

Sally Martin's narration was absolutely wonderful. She spoke clearly and was easy to understand. She had a nice voice with a warm tone and I feel she made this a well-rounded audiobook.

This was great listening for me. I love animals and although don't like hunting, I know it is necessary. It was a little hard listening about the demise of these animals, but it was handled well. The book was a compilation from several different travelers' diaries so one gets a broad spectrum of what was thought of these animals. I knew virtually nothing about the Santa Fe trail so it was interesting to learn about that. The narration was mediocre. Once I got used to the voice it was fine. She did a good job with cadence and inflection.
I was gifted this book in exchange for an honest review.

Just because they got in the way.....

A far better read than most "publish or perish" or doctoral theses. Apparently researched in depth using memoirs of eyewitnesses of the time, a clear picture of what we have destroyed and lost in the animal kingdom of the US is presented with clarity. Specific animals are targeted in this piece, and the "before" is well demonstrated with much for the reader to learn, and the how and why of the depopulation with or without the need of relocation of each is equally depicted.
This is an excellent study piece for the ecologically minded, whether as required reading or personal enrichment. I found it to be a page-turner for me, and I learned a great deal that I did not realize I wanted to know.
Sally Martin gives this lecture a remarkably pleasant experience in the audiobook format.
I received this book free from the author, publisher, or narrator in exchange for an honest review.

What did you love best about As Far as the Eye Could Reach?

A series of essays about living creatures during America's expansion west. Each interesting vignette visually descriptive. Memorable. Sally Martin added to the audiobook with narration that kept my interest and was pleasant to listen to.

The history and biology of the stories. It was unique in my reading / listening experience. I got into it.

The stories about people's encounters with antelope.

One of appreciation of the diversity of our country. The land itself and how Man and animals lived.

I enjoyed this audio book. Again, it was unique in subject. Both well written and well narrated.

Thank you for the opportunity to listen and review it.