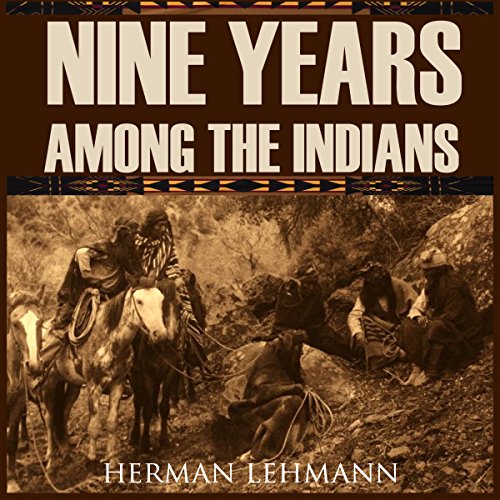 In a real-life version of Little Big Man comes Indian captive narrative of Herman Lehmann. He was captured as a boy in 1870 and lived for nine years among the Apaches and Comanches. Long considered one of the best captivity stories from the period, Lehmann came to love the people and the life. Only through the gentle persuasion of famed Comanche chief, Quanah Parker, was Lehmann convinced to remain with his white family once he was returned to them.

Lehmann saw some of the most dramatic changes in the western United States from a perspective few whites had. He didn't just play the part...he was living as an Indian. His struggle to readjust to white culture is detailed here as well. At the time of this writing, he was married with five children, although he maintained the ties to his Indian friends and family for the rest of his life.

Every memoir of the American West provides us with another view of the movement that changed the country forever.

What listeners say about Nine Years Among the Indians (Expanded, Annotated)

Great story with great points of view....however, narration must be his reader’s evening occupation—bland, no feeling, pretty darn monotonous

Five stars is not enough! This is a treasure. Story rings true. Narration is perfect.

The story is amazing. Narrator should have been briefed on propper pronunciation of names and locations.

it's easy to forget the true meaning of freedom, it has been gone in America since they caged the natives

great glimpse into another world! absolutely enjoyed the story, but the reader left a lot to be desired. think of an incredible adventure read by Ferris bueller's teacher.

This book should be required reading for students in Oklahoma. I thoroughly enjoyed the entire book.

This was a great story that captivated me from beginning to end. Thanks for sharing it with us readers.

I loved this book. During many years of hunting in Mason and Gillespie counties, I hear stories of Hermann and was shown his old haunts by German descent ranchers. A rancher in Schleicher county tikd me about this book because his folks had settled there and fought the Alache and Comanche. This book gave a perspective from a white caltive who completely accepted his new culture, with all of it's nobility, savage cruelty, ingenuity, and ultimate grief at it's collapse. What a great story.

Great story, with a weak, but earnest, reader.

Great story, with a weak, but earnest, reader. Worth the money to hear this fantastic tale.

This story ties in with many of the other stores I had read . Thank you